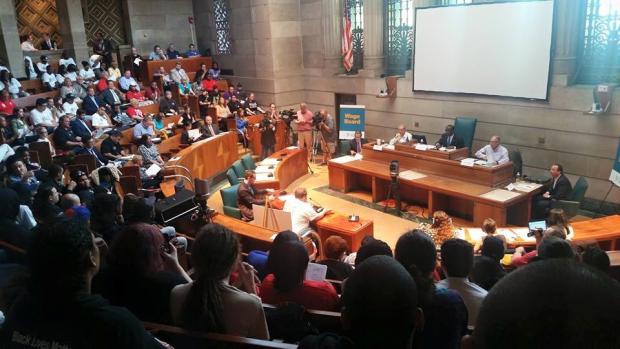 Courtesy of the Coalition for Economic Justice.
by
Shane Meyer
/ Jun. 9, 2015 3pm EST

By far, the largest and loudest contingent belonged to the ranks of fast food workers—a representative slice of the nearly 200,000 such workers across the state, who make about $9 an hour.

They said that they are unable to rely on a steady supply of hours each week, and that, even when they get full-time hours, the resulting check is insufficient to cover life’s basic necessities.

Some of those currently attending college said that they’d seen an entire week’s check spent on one book; others said they’d had to go without books in order to fulfill more pressing needs.

Going without medical care (just 13 percent of frontline fast food workers have health insurance, according to one study), decent meals, and a personal sense of security was a common theme.

Crescenzo Scipione, an employee of Burger King who left college after two years because he was unable to meet the costs, said, “I almost never know how I’m going to pay bills until a few days before they’re due.”

The testimonies refute the solutions proposed by armchair critics, who like to suggest that fast food workers should simply learn a skilled trade or go to college; indeed, many of those testifying said that the $15 figure was a means to escaping the cycle of poverty and debt by eventually moving into a career via further schooling.

Zaire Doyle, an employee of Wendy’s, wept during her testimony, making much of it incomprehensible. At one point I was able to transcribe “I don’t have anything.”

One concern from the mayor stemmed from the imbalance in the cost of living across the state; he asked whether the $15 figure ought to be higher for fast food employees in New York City.

“It should be based on locality,” responded Flo Tripi, president of Region 6 CSEA, while Scott Phillipson, president of SEIU Local 200, cited a study that pegged $15.08 as a “subsistence” wage in Syracuse.

Fifteen dollars is barely a sufficient wage in Upstate New York and insufficient downstate. For now, however, $15 remains the cry of organized fast food workers across the state and the nation. There is skepticism that the figure represents an achievable goal, and Cuomo has visibly avoided yoking himself to it; instead, he is eyeing $11.50 for the city and $10.50 for the rest of the state.

James Parrot with the Fiscal Policy Institute compared the general statewide trend of wage stagnation and declination against robust growth in the fast food sector. He suggested that—given the limited number of chains in operation, and the uniformity of wage price across the sector—the balance had tipped too far in the industry’s favor. Fast food chains—either by collusion or circumstance—have rigged the labor market to their advantage.

Sam Magavern, co-director of the Partnership for Public Good, told the board that the fast food sector was the “most unequal” of any sector in terms of pay for executives and pay for frontline employees.

Effectively, Parrot added, the current minimum wage functions as a subsidy to large corporations, which push the costs (e.g. food stamps, healthcare, etc.) onto taxpayers. He estimated the bill at $700 million to $900 million per year. Tara Melish, director of the Center for Human Rights at UB Law School, later noted that 60 percent of fast food workers rely on public assistance: “Taxpayers subsidize the fast food industry’s subhuman treatment of its employees.”

Irene Tung of the National Employment Law Project agreed that the rapidly growing profits of the fast food sector have “not been shared [and] wages have declined, factoring in inflation.”

She cited a University of Massachusetts study which found that savings from decreasing turnover—the cost of replacing workers in an industry in which it’s abnormally high—along with a modest price increase (12 cents on the Big Mac) would cover the proposed wage hike “without cutting into profits.”

It’s not just a legal, economic and political matter—there is, too, a moral aspect, as illustrated by Rev. Kirk Laubenstein, from the Coalition for Economic Justice, who remarked that “Moses organized workers in Egypt.”

Both WIVB and the Buffalo News quoted Michael Saltsman, research director for the Employment Policies Institute [EPI], who inveighed against the wage hike, pointing to a survey conducted by EPI, which found a majority of restauranteurs would rely on staff cuts and/or price raises as a response to a potential $15 mandated wage.

Via Twitter, LittleSis.org described EPI as a group “secretly funded” by lobbying impresario Richard Berman.  Berman is known for his web of nonprofit fronts, like EPI, which claim deductions for charitable donations from anonymous donors, publish industry sponsored research, and subsequently bill his firm, Berman and Company, which, in this roundabout manner, makes off with the boodle.

Berman has a documented tendency for playing dirty; and, in 2009, his son, former Silver Jews fronter David Berman, excoriated his estranged father in an open letter, calling him “a despicable man…a sort of human molester.”

Although to my knowledge an EPI rep didn’t speak at the hearing, the voice of business was heard. Enter stage left Grant Loomis, vice president of Government Affairs for the Buffalo Niagara Partnership, to a smattering of boos.

“The Chamber of Commerce is opposed” to the proposed increase, he said, remarking that it had also been opposed to the previous hike. “Businesses have not had time to absorb [those] increases.”

The Wage Board’s Fishman asked Loomis to respond to research on a minimum wage increase that found negligible effects for businesses.

“I’m not here to debate…I’m here to share what members concerns are,” Loomis said.

Taunting, groans, and a lone call of “bullshit” reverberated in the cavernous Council Chambers, prompting a request for quiet from the mayor.

After a couple more questions, Loomis stood from his chair, looking shaken and wan, and disappeared into the gallery.

The Wage Board will hold another meeting in New York City before making its recommendation to the state’s labor commissioner: “The board’s final recommendation is expected by July. The commissioner will then have 45 days from its receipt to issue an order.”

The commissioner’s order does not require the input or consent of the state legislature.