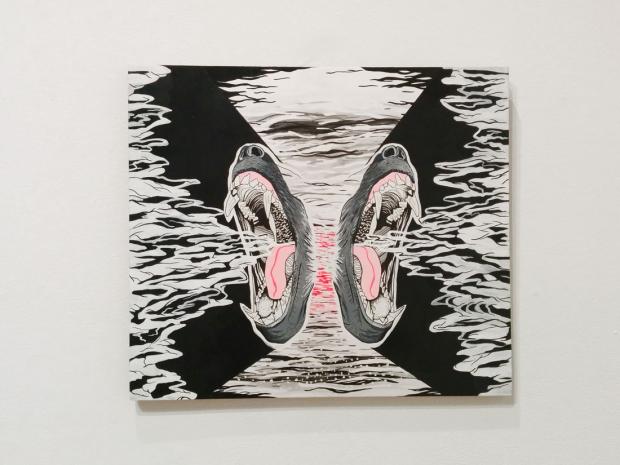 Some wonderful art on view at the current—volume three—Amid/In Western New York exhibit at Hallwalls. Such as Pam Glick’s variously abstract renditions of Niagara Falls. And Evelyne LeBlanc-Roberge’s cardboard packing boxes with some surprises. And a sweet little video about a sweet little technokid in a carnival milieu by an artist duo going by the name Flatsitter. It works for the most part.

If you thought Andy Warhol had had the last word on packing boxes as art, you need to see LeBlanc-Roberge’s work. No Brillo labels here, just plain brown cardboard boxes, tape-sealed and stacked, ready to be picked up and delivered—or maybe just delivered—until you look closely and discover an odd bit of string on one of the boxes, a house key on another—it looks like the exhibit preparators had been hasty setting up, or hadn’t quite completely cleaned up before the opening—isn’t a bit of string at all, or the key a key, but these are inkjet printed—somehow—on the box brown cardboard.

You’ll want to feel to believe. And if you did feel—but the rule is, you don’t touch art, in a gallery, anyway—you’d discover that the clear tape on the boxes—most of it anyway—isn’t tape either, but again inkjet printed. And the cardboard flaps, where they come together—the break between the flaps—isn’t a break. Printed. One of the boxes has some fragments of broken glass on it. You’d hesitate to finger broken glass. But if you did, it isn’t broken glass. At least as good pop art—joke art—in a good sense—as Andy Warhol’s boxes.

LeBlanc-Roberge has another quite different sort of piece. Except inkjet printed again, and trompe-l’oeil. A large section of blank concrete wall, it looks like. According to information on a handout, part of an elaborate project involving her artistic renderings of descriptions by actual prisoners of the spaces they are confined to versus spaces or places they would rather be in, that they remember or imagine but now cannot access.

Pam Glick’s paintings show Niagara Falls—the actual waterfall—in a dozen or so versions representing that many moods of the artist as much as aspects of the icon wonder. Thirteen ways of looking at a blackbird. “Niagara Falls is a subject I’ve been painting off and on since the ’80s,” she says in an artist’s statement. “It symbolizes home. The pull of the water going over the ledge is a metaphor for both change and inevitability. The geometry of its 45-degree angle and contrasting elements have endless possibilities for me; stillness, motion, color, repetition, and mystery. Taking it apart, I hope, allows the viewer to examine its meaning for themselves.”

Some of that happens. Most particularly, I thought, in the piece called Niagara Falls Diagram, in media listed as black paint marker on white board. The face of the falls as irregular grid. Furious and placid curtain. Changing and unchanging. Not imitative but reminiscent somehow of the minimalist art of Agnes Martin.

The Flatsitter video tells the story of a little girl who sews electronic devices of some sort—surveillance devices, possibly—into the innards of plush toys that she then circulates into the larger world as carnival sideshow prizes (she seems to have a deal going with the carney).

Sculptor Bethany Krull has three works about “the complicated and often contradictory relationships humans maintain with other animals,” she explains in an artist’s statement. Departed consists of a ceramic sculpture mouse or rat in a shoebox satin-lined coffin. Surrogate consists of what looks like a space alien baby in a cradle holding a human species doll.

Allen Topolski has several combination found objects sculptures and graphic items, the found objects sometimes including lighting apparatus, sometimes audio components. Ian McCrohan has a complicated painting with collage elements intended allegory about landfills and the environment. Denton Crawford has a series of various media items, one consisting of a fake flower and fake denture, in blue and pink hues. Whereas Adrian Bertolone seems to aspire above all to be inscrutable. His artist’s statement—maybe explaining or describing one or maybe all of his several works in the show, or maybe not—reads in part: “A small car in a literal hamster wheel of stone roads and ivy with constant tire squeal. The arms and jaws in this place. If you read out the words, it makes a funny sound. I live in a house made of plastic and bones.”