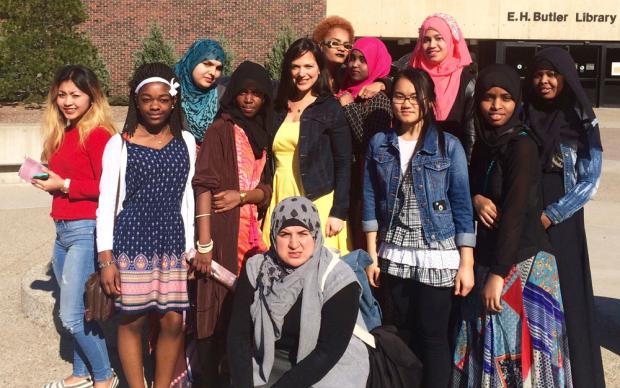 Melissa Meola Shanahan (in yellow) and her Lafayette High School international students.
by
Jana Eisenberg
/ May. 25, 2016 12am EST

“Clothes…change our view of the world and the world’s view of us.” —Virginia Woolf

Inspired by a Buffalo State College project called “New World New Wardrobe,” a group of Lafayette High School students will present a fashion show on June 2 at their school. The public is invited.

The high school students all live in Buffalo. Few of them were born here, though. They’re from countries like Burma, Eritrea, Iraq, and Somalia. And they’re part of Buffalo’s growing populations of foreign-born residents—many who are refugees.

“The Cultural Awareness Club exposes students to art and culture in Buffalo,” said Meola Shanahan. “Our field trips include theatrical, art, music, and literary events, as well as visits to colleges.”

As part of their club activities, LHS students attend the annual New World New Wardrobe fashion project, through which newly arrived immigrants can “shop” collected clothing for free. The project also creates dialog between the college students and newcomers.

Says Meola Shanahan, “Our high school students really enjoy the program at Buffalo State; they wanted to take it further. We talked about styling the clothes; what influences them, like tradition, religion, or their current surroundings.”

They decided to host their own fashion show. Using items from their closets or borrowed from friends and family, the students became designers and models. Three area professionals will judge the show: Erin Habes, from Buffalo State College’s fashion program, Jessica Wegrzyn, theatrical costume designer, and Joe Stocker, of Bureau boutique.

The process of creating the fashion show has empowered the students to share with and learn from each other through clothing—something that they are hoping to inspire others to do as well.

Gwaher Shaibi, whose family is originally from Yemen, says that she wanted to have fun, of course, and also to be thoughtful about who wore what. “We chose what we thought would suit each model’s perspective,” says Shaibi. “Everybody has their own style and way of expressing their feelings and moods. When you wear your cultural clothes, you’re saying you’re proud of who you are and where you came from.”

Pyu Pyu, who is of Karen ethnicity originally from Burma, says that she enjoys modeling. “What you wear should make you happy,” she says. “Everybody wants to show their own style.”

“[Fashion] is an important way to express my culture—I can’t change where I come from,” says Farah Atta, whose family is Iraqi. “Fashion, and your tradition and your practice, are a part of who you are.”

Angela Ngoma, who came to Buffalo from the Congo Republic, says, “It makes me feel good that I’ve adapted to a new American culture. In the show, we are crossing up our clothing—I’ll wear Asian cultural clothing, and my Asian friends are wearing African clothing. Even though you may be a certain race or come from a different culture, you can learn new things and express yourself, like we are.”

“I’m excited to show off my culture through clothing. I want everyone to know about it,” says Thai native Naywah Htoo. “In America, we wear traditional clothing for holidays or church. I’m happy that I got to know what others wear in their country, and what it means.”

Bahati Adam, who was born in Congo, and lived in Kenya, says that clothing absolutely affects a person’s mood. “When you are dressed and you feel bold, you can do anything. And, if you are not dressed comfortably, you can feel shy. The same things don’t make everyone confident.

“In my culture, ‘communicating textiles’ actually express your ideas on the cloth through symbols and pictures; it shows and teaches people how you feel without saying a word,” adds Adam.

Says Kisanet Berhe, who was born in Eritrea, “When I wear my cultural clothing, and am with others from my culture, it makes me feel special and more like me—that is where I belong. I feel both comfortable and uncomfortable in American style clothing. Sometimes I want to wear my culture dress every day…I’m trying to be a different person in a different world.”

Adds teacher Meola Shanahan, “It’s been interesting to see which girls have risen to become leaders in this process. They’ve had to meet, plan, make sure to follow through on things. It’s a challenge. I provide leadership, but don’t ‘take charge.’ I’m excited to see it come to fruition.”

Ayan Hassan, whose family came from Kenya, says that through modeling, she’s experienced new cultures. “It shows how we can be in their place, and they could be in ours. After wearing something from someone else’s culture, I feel like I’ve been somewhere that I haven’t been before.”

Lafayette High School is located at 370 Lafayette Avenue in Buffalo. Show time is 4:30pm on June 2nd and admission is free.

Jana Eisenberg is a Buffalo-based writer and editor.