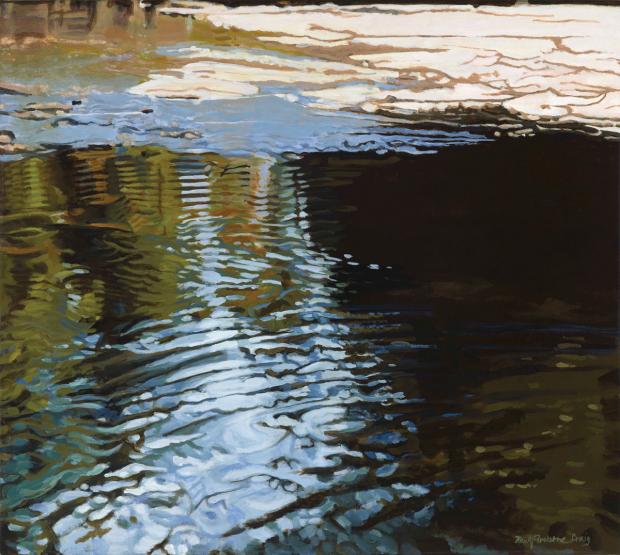 Artist Nancy Treherne Craig’s very beautiful paintings and similar media works currently on show at the Meibohm Fine Arts gallery comprise landscapes, skyscapes, and waterscapes. Usually all three categories in the same piece, often in distinct horizontal layers across the face of the picture. Imparting a hint of abstraction to work that would be more readily characterized as painterly realist.

And with a bit of mystery at the heart of the work as a whole. Of the 18 pieces on show, six have the same rather enigmatic title: Yard Work, plus a number, one through six. But in no case among these pieces—or for that matter, any other of the works on show—any sense of what we usually mean by the phrase “yard work.” No sense of cutting grass, no sense of digging and planting flower beds. In fact, there’s not a human figure—doing anything at all—in any of the works. Just nature, sometimes on spectacular display, sometimes more subdued, more demure.

What does “yard work” mean in the context? Maybe just the work of painting a picture. Maybe painting a picture in one’s backyard. I think probably both of these things, in some of the cases at least. But in all cases, I think, also something more, something deeper, and more to the point about Treherne Craig’s art. Something akin to what Thoreau meant when he said he went to live in the woods to “transact business.”

The starting point of her artmaking is the natural world, Treherne Craig says in an artist’s statement. And the real work seems to be looking and seeing deeply into that world. “In trying to really see my surroundings…I find a richness that is easy to miss in quick glances and casual appearances. We need to see it all; we need to open our eyes.”

Much like Thoreau’s real work—his business—in his lifelong—not just the two years in the cabin in the woods—sedulous nature observational project.

Treherne Craig says her artwork “is intended to be a call to be awake, to be aware…and therefore to be fully alive.”

Thoreau puts the same thought more succinctly: “To be awake is to be alive.”

The works on show include paintings, in acrylics and oils, drawings, with a type of water-soluble wax crayon, and a single giclée digital process print. Vividly colorful art, in shades of blue to blue-white to pure white—for skies and snow-covered fields, and lake or stream waters—or green to yellow to purple—for large grassy expanses in various seasons and various times of day—or red to pink to orange—for dawn or dusk atmospherics, with or without fleecy clouds.

Predominantly. So that one work in a predominant dull latte brown comes as a surprise. A rural stream segment in springtime full-flow condition and opaque with springtime silt runoff. Amid grassy/muddy banks, and with a branch of white blossoms just intruding into the picture from the upper right border.

Among other works, one showing a dark pool of still water beneath a waterfall spilling over a long arc of layered rock wall, but largely obscured by dazzling sunshine and shade effects on the water, transforming the dark pool into a huge ambiguous pea-green area, marked by further dazzle effects along a jagged diagonal line across the middle of the ambiguity area.

The single giclée print depicts a farm field of purplish high grasses traversed by what might have been a single pass of farm vehicle tracks, against a distant dark line of trees, under the evening fading light of a cloudless sky. A scene of nothing much and everything—the vehicle traverse line a human gestural mark on an otherwise pristine place and time.

One of the wax crayon drawings is of a stand of deciduous trees in glorious fall colors in a fusion mix reminiscent of classic Monet impressionism—the haystacks, the cathedral façade variations.

Two of the pieces are preliminary versions of works later produced under the strict time limit—forty-five minutes start to finish—of the Hallwalls Midwinter Draw event. Both winter scenes, vignettes.

The Treherne Craig exhibit is entitled Eyes Open. It continues until May 26.