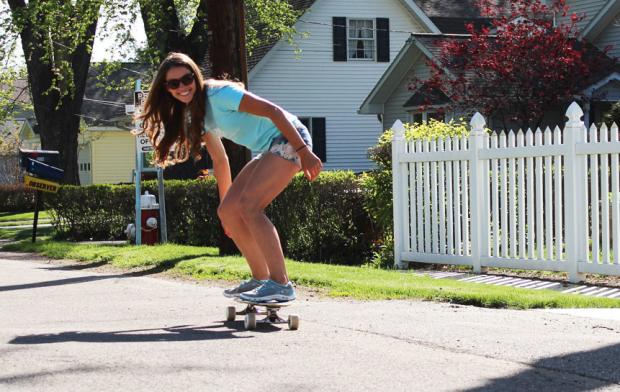 There is a photograph of me as a kid, maybe eight years old, that represents summers spent the way I’ve always loved best. My hair is long—no haircuts till August—and I’m wearing cutoffs, tube socks pulled over the calf, a faded red t-shirt that was most likely my older brother’s soccer jersey, East Aurora Arsenal, circa 1978. A year later I’d have my own Arsenal jersey; in the meantime I wore the one that no longer fit him.

I am standing inside a corrugated drainage pipe. The photo was take by local artist Malcolm Bonney with a fisheye lens on an Olympus camera. My best guess is that the drainage pipe was near the house in which I grew up. The pipe carried runoff from a housing development in East Aurora to the east branch of Cazenovia Creek, just a couple hundred winding yards away. In warm weather, kids in the neighborhood would climb down to the little stream where that pipe came out and walk along the banks and in the water. It smelled rotten and the bugs were awful. Some ways downstream we’d come to big repositories of grey clay, which we’d dig up and put into plastic bags, then tote it home to sculpt with. The clay was a mess, shot through with twigs and leaves and little stones, but we did our best with it. (Sometimes we threw it at each other, and it hurt to get hit, even more than it hurt to get hit by the spiky horse chestnuts we threw at each other in the fall. But not as much as it hurt to get hit by a quince.) The patient kids would clean out the detritus, form it into rectangular blocks like the ones we got in school, and keep it moist for future use. Most of us would screw around with it for an hour, twigs and all, then leave it to dry and crack, and return to the stream for more when we needed it.

Sometimes we’d walk further down the stream, climbing over fallen trees and using the embankment when the water formed deep pools that suggested leeches, until we came to the Cazenovia itself, which was broad and deep and slow-moving. As a kid I didn’t quite comprehend that this was the same creek that spilled over a dam a quarter-mile away, where the American Legion post stood, and where later on we’d spincast for bass, losing a lure a day at least to rocks and underwater logs. I never once caught a fish there. Other kids did.

Older still, we explored the creek below the dam, where we found long plates of rock carved by current that formed natural water slides, with some mild hazards along the way and at the discharge points. (I have scars.) That shallow, fast-moving water called so strongly that, as teenagers, my friends and I would take precipitous shortcuts, sliding down steep 80-foot cliffs at midnight, winter and summer, to get to the creek further downstream.

These were my local waters, which I knew quite well, along with a handful of ponds and brooks, and a couple of lovely waterfalls that I remember but whose location memory and discretion obscure now, and a couple of spots where a person can jump off a bridge into a creek with relative safety. I did not understand as a kid that the Cazenovia fell into the Buffalo River, which fell into Lake Erie, a confluence that made possible the city in which my family lives. As an adult, young and now middle-aged, I have sought water—swimming and scuba-diving, creek-walking and skipping stones, ducking my head under waterfalls of all sizes, allowing myself to be pounded by ocean waves until I could barely remember who I was or where. I once wrote the name of my one true love with shells in the still, shallow waters of the Persian Gulf.

One summer, in my late 20s, some friends and I revisited the deep, slow-moving parts of the Cazenovia, above the dam and near my family’s house, to seek the ruins of a small-town society that still exists here and there, but spottily, as we isolate one from another and keep our kids from wandering freely. We were looking for a boathouse from which East Aurora swells would go punting in the 1920s and 1930s, the women carrying parasols and the men in white linen suits. We didn’t find it. Instead we came across a societal outcast, a Caliban from a prestigious East Aurora family, six and a half feet tall and 300 pounds, with a beard to his chest. He was filling a five-gallon bucket from an outflow pipe on a wooded slope not far from his ramshackle house above the creek. We’d all been taught as kids to fear him, but here we were—us trespassing, sweating in the heat, cut by thorns and branches; him gathering water from a drainage pipe. His beard had greyed considerably; his eyes were small and darting. He straightened his back when he saw us but said nothing. After an awkward moment, I asked him if he knew where the boathouse had been. He looked down toward the creek, raised a hand vaguely, then let it drop. “It burned down a long time ago,” he said.

Best summer ever, my friends. Don’t let it pass you by.