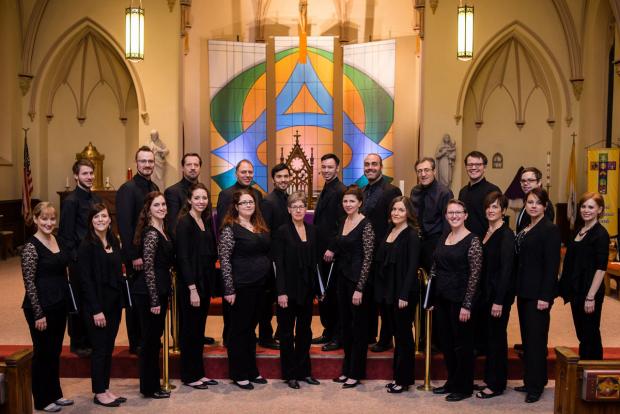 I had a chance to see Harmonia perform recently in St. Louis Church, a building that has timeless magnificence. Elegant pillars lined with gold reach to form geometric flowers on the ceiling, growing from a rich marble floor. These dimensions are invaluable for Harmonia, both amplifying their voices and impressing their audience from the moment they step in. While the rest of the audience filed into the cathedral, I couldn’t help but trace my eyes along every miniscule architectural detail.

The performance which I was an audience of was “Into Light”, a concert featuring pieces about light and dark, life and death. Harmonia produced an appealing visual by using candles, while at the same time referring back to their theme. The flickering glow illuminates Robert Pacillo, the artistic director of Harmonia as he begins the concert.

By playing a single note on his pitch pipe, each vocalist is able to anticipate their starting note of the piece. Because Harmonia is an a cappella group, the vocalists cannot lean on an instrument for help if they confuse or mistake a note. The use of an all a cappella repertoire is more challenging to learn, but also more impressive to perform. Much early sacred music was a cappella, and recently there has been an increase in popularity for a cappella pieces. The use of a cappella, like the architecture of the Buffalo churches Harmonia fills with song, is timeless and monumental.

By far my favorite song fron Into Light was “Past Life Melodies” by Sarah Hopkins. It started off with an eerie buzzing hum, full of lamentation and sorrow. Then, out of their mouths sprang alien sound, gave life to unearthly chasms, echoing off of the walls of the magnificent church. There was only music, and it filled everything. At the end of the piece, the vocalists were a resonating drone, filling the earth by using overtone, or throat, singing. This is a technique that allows air to travel straight from your lungs out of your mouth, bypassing the vocal folds entirely. The use of overtone singing was an impressive and thoughtful end to an already magical piece.

So far, Harmonia has world premiered seven pieces. On May 21, Harmonia will be premiering a piece from composer Steven Sametz. Harmonia’s premieres, as well as their other songs, come from a variety of places. Some of their selections are found within the public domain, while others need to be ordered from music publishers. While most of the pieces they have premiered come from composers within the WNY community, the music can come from the United States, or be printed in places as far away as England.

On Saturday, May 21st, Harmonia will have its 10th Anniversary Concert. This concert has great importance, and part of Harmonia’s mission is musical collaboration. Because of this, the repertoire varies slightly by including two pieces that feature a cello, and one with an oboe. In addition, the anniversary show will feature “Echo” by Steven Sametz, a nationally known composer, arranger and conductor of choral music. The lyrics for this piece are based on a poem by Christina Rosetti, written in 1862. It is a poem of love and longing, and these themes are to be reflected in the performance. Harmonia regards this piece as a work of substance, rather than celebration. “Echo” has the potential to enrich Harmonia’s already opulent repertoire, and to impress upon individuals the same musical magic that current audiences can’t help but sense.