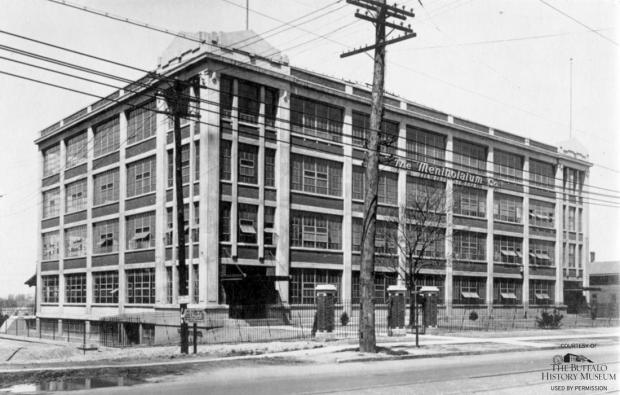 “Most agreeable odors fill the factories where Mentholatum is put in jars, tubes, and finally boxed and packed for distribution to all parts of the world.” – The Mentholatum Company, A. A. Hyde Collection, Undated

The former plant of the Mentholatum Co., 1360 Niagara Street, is one of the Niagara River’s iconic daylight factory buildings. Here, millions of green jars of Mentholatum ointment—the “Little Nurse for Little Ills” providing relief for burns, colds, and other ailments—were manufactured. Built in 1919, the four-story, 64,000-square-foot factory was described as “sunlit, sanitary, and spotless, thus providing the most healthful and agreeable surroundings for employees.” It was Mentholatum headquarters from 1946 to 1997, after which—with the inducement of grants and tax abatements—all facilities were moved out of Buffalo to suburban Orchard Park. The 126-year-old company, which became a subsidiary of Rohto Pharmaceutical in 1988, still makes Mentholatum ointment—as well as newer products such as Oxy and Softlips—at its suburban facility. The Niagara Street site is now occupied by Garrett Leather Corp., a maker of specialty leather products.