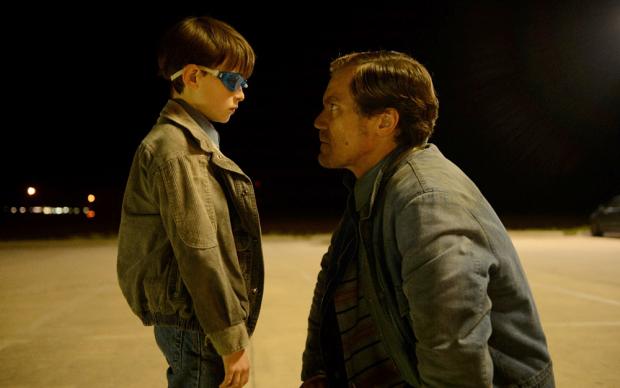 A lot of people feel who have been watching his career feel that writer-director Jeff Nichols is in the place now where Steven Spielberg was in 1974, after Sugarland Express and Duel on his way to Jaws and Close Encounters of the Third Kind. Nichols’s three films—Shotgun Stories, Take Shelter, and Mud—show a craftsman consciously developing his skills with the goal of becoming the kind of filmmaker who can helm studio blockbusters.

This isn’t interpretation: It’s exactly the way Nichols talks about himself in interviews. There’s no denying that he is both gifted and able to learn. Combine that with an authentic point of view for stories set in the South, where he was born and raised, and you have a potentially unique talent, on a level with if not specifically comparable to the Coen Brothers or John Sayles.

That’s why Midnight Special is finally such a disappointment. While his technical skills drive most of the movie along smoothly and smartly, in the end this modestly budgeted studio movie is all too clearly a calling card showing how willing he is to sign up to make lucrative summer comic book franchise movies.

For most of its running time, Midnight Special is a pleasure to watch. Nichols knows how to tease out his story, giving us just enough information to keep us involved without front-loading it. (It’s a skill that makes for engrossing viewing while making it difficult for the conscientious reviewer who wants to tell you about the movie without giving away too much.) We recognize that we’re in a familiar 1980s sub-genre, about a child with special powers on the run with his parents while being chased by the government and other nefarious figures. Think Firestarter with dollops of Starman and E.T. It’s set in Texas and Louisiana and (for valid plot reasons) largely takes place at night, on desolate roads and run-down motels.

The boy’s father is played by Michael Shannon (who has been in all of Nichols’s films), and he fits the definition of a movie star: Whenever he’s on screen, you’re eyes are drawn to him, even if he’s not doing anything. He is aided by an old friend, a state trooper played by Joel Edgerton; Kirsten Dunst joins them as the boy’s mother. Sam Shepard and Adam Driver round out an above-average cast for a story that is more concerned with issues of family and faith than special effects, though Nichols uses those sparingly and tastefully.

So what’s not to like? As satisfying as it is to be drawn into a slowly revealed story, the time comes when you have to show your hand. And in the final reel, sad to say, we find that Nichols has been bluffing. It’s possible that he knows how the final combination of science fiction and Christian parable fit together; on the other hand, it seems just as likely that he’s throwing out a lot of options hoping that viewers will extract something from the stew that they like. By the same token, it’s possible that the long list of plot holes I noted are answered in ways that more careful audiences than I will notice. But I don’t think so.

For as entertaining as most of it is to watch—it’s 110 minutes but feels a half hour shorter— Nichols builds expectations only to frustrate them. A little of that is okay, but there’s a fine line between ambiguity and obscurity, and he comes up on the wrong side. Opens Friday at the North Park.

Before the internet, a “widget” was something business school instructors used when discussing a principal or procedure in which the nature of the physical object was not relevant. Higher mathematics functions in somewhat that way in The Man Who Knew Infinity, a biopic about the great Indian mathematician Srinivasa Ramanujan (1887-1920): You don’t have to know anything about the subject or Ramanujan’s contribution to it to watch the movie, which only occasionally lets discussions of his work intrude on the drama. That’s not likely to be much of a surprise—a movie about mathematics inevitably brings to mind the phrase about dancing about architecture. But you can’t help but wish that writer-director Matthew Brown had been able to find some way to impart to viewers the nature of Ramanujan’s importance other than having his Trinity College sponsor (Jeremy Irons) rhapsodize about his brilliance. Irons takes the acting honors as a mostly fictionalized character who, having lived in world of numbers, is unable to be the friend the young Indian needs. As Ramanujan, Dev Patel is hamstrung by the twin demands of biography and inspirational drama. It opens Friday at the Eastern Hills Mall Cinema.

I can’t claim to be knowledgeable about the genre, but the French animated film April and the Extraordinary World (adapted from the graphic novel by Jacques Tardi) is the first steampunk movie I’ve seen that gives a basis for its alternative history. In 1870, Napoleon III is killed while overseeing an experiment designed to produce invincible soldiers. A side effect leads to the disappearance of important scientists over the next seven decades, leading the world to develop not by creating new technologies but by refining existing ones, primarily steam-driven engines. So in 1940 the world was exhausted its supply of coal, and the need for charcoal sends countries to war over land with heavy forests.

That’s the background for a story involving a young girl, April (voiced by Marion Cotillard), trying to carry on the work of her parents and grandfather, who are among the disappeared scientists. In the manner of this kind of thing, the story is too complex to spell out, but it’s as entertaining as the design of the film is compelling to look at: As befits a sooty world, it’s primarily grey and black with splashes of primary colors—quite elegant. The animation style openly references the work of Hayao Miyazaki (look for that walking castle), though the story is equally French (there’s a cop who could well be named Javert). Opens Friday at the Amherst.

I wasn’t expecting to like Sing Street, the new film from writer-director John Carney, whose 2007 Once charmed audiences around the world before doing the same on Broadway. His 2011 follow Begin Again was an obvious attempt to repeat that success, so the news of a third music-based film from the Irish filmmaker sounded dead in the water. To my surprise, it’s one of the most appealing movies of the year, especially if you were a teenager in the 1980s who knew every British band on MTV. Ferdia Walsh-Peelo stars as a boy, pulled out of private school because of his parents financial problems and sent to a rough local school, who copes by forming a band. The fun comes from watching them try out different musical styles of the era, alternately imitating Duran Duran, Spandau Ballet, and the Cure, with as much attention to making videos as to writing songs. It’s sugar-coated but not saccharine, and the songs (co-written by Carney) cleverly mimic what a bunch of precocious but imitative teens might have done. As 1980s nostalgia goes, it’s purely delightful. Opens Friday at the Amherst and Eastern Hills.