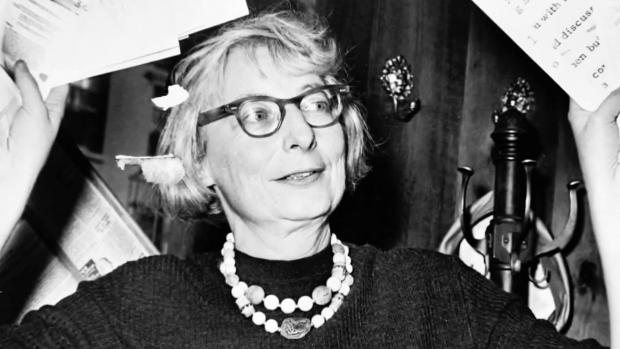 Citizen Jane: Battle for the City, a documentary about the great urban theorist and activist Jane Jacobs, opens with a quotation from her seminal 1961 book, The Death and Life of Great American Cities: “Cities have the capability of providing something for everybody, only because, and only when, they are created by everybody.”

In that book, Jacobs gave cohesion to a manner of thinking about cities and human society that undergirds a theory of city planning once revolutionary but now commonly accepted. Great, functioning systems, she argued, are built from the bottom up, by designs that respond to the many and diverse needs of the people who create them, often improvisationally, and whom they serve—designs that are manifest as they are realized. Top-down planning that expects or even demands monochromatic behaviors of people is inhuman and doomed to fail.

The documentary by director Matt Tynauer (Valentino: The Last Emperor) makes the case that this is true of political systems, too, and offers Jacobs’s activism as a model for contemporary resistance to oppressive governments.

The film’s antagonist, Robert Moses, is introduced early as the embodiment of the staggeringly destructive urban renewal mindset that was born of progressive movements of the early 20th century and reached it zenith in postwar America. It is an important note that the film takes pains to make: The desire to clear city slums, provide decent housing and recreational facilities, and to promote transportation and commerce, was—like most public policy endeavors, no matter how they turn out—a progressive response to intolerable situations. That Moses and his facsimiles and acolytes chose a brutal, inhumane, modernist approach to addressing these situations is in hindsight a tragedy, but not evidence (at least not in the beginning) of malevolence. Still, the film rightly points out that the people for whom Moses shilled—developers and concrete pourers and the auto manufacturers, and the politicians they owned—made a lot of money by promulgating urban renewal practices and the funding streams that enabled those practices to eviscerate American cities. And Moses is an unsympathetic figure: arrogant and brusque, misogynistic, given to the kind of dismissive insults that might recall for local viewers Carl Paladino and other revilers of “obstructionists.”

Jacobs, meantime, is winningly portrayed: smart, observant, first a part-time and then a full-time journalist who is a denizen and chronicler of the sort of neighborhoods that common sense dictates are essential to an engaging urban experience. At times, the filmmakers allow those they interview about Jacobs to give her too much credit for “discovering” the problems with urban renewal by herself. No one else saw this, exclaims more than one interviewee, but that’s not true, and Jacobs gave credit where it was due: She was invited to Harlem to observe the destruction urban renewal was wreaking there. Others shared her horror, and her thoughts were organized by theirs.

In any case, the “battle” in the film’s title is joined about halfway in, when Moses champions a sunken extension of Fifth Avenue running right through the middle of Washington Square Park. He’d been pushing the concept for some time, but in 1955, when he submits the plan again, he meets Jacobs. This is Jacobs’s own neighborhood, her family’s park, and she becomes one of the leaders of a creative and opportunistic opposition movement that deals Moses his first real planning defeat. Shortly thereafter, she leads a movement to prevent the West Village, where she lives, from being declared an urban renewal zone. Another opposition movement, again with Jacobs in the fore, deals something like a coup de grace to Moses a few years later, stopping his proposal for an expressway cutting through Lower Manhattan that would have destroyed what are today (and were then) some of the city’s most distinctive and successful neighborhoods. (For local urban planning fans: Does the priest with the dimpled chin briefly pictured in this part of the film remind you of a local Jacobs devotee? Or his brother?) Moses, we are told, is never the same.

But of course his legacy is everywhere, not least in Buffalo, where we are even now debating whether and how to undo urban highways and housing projects that scar our city, created by Moses imitators 50 or 60 years ago. “It is wicked to be a victim,” Jacobs says toward the end of the film. It is worse to be the victimizer, she explains, but it is also wicked not to fight what you know is wrong. “People have to insist on governments trying things their way,” she said. Amen to that. Opens Friday at the Dipson Amherst.