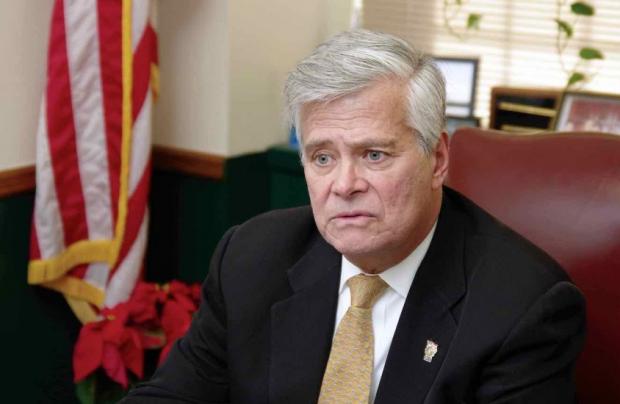 Since the Monday arrest of New York State Senate Majority Leader Dean Skelos and his son, Adam, on federal corruption charges, political insiders have begun to speculate who could replace Skelos should he resign from his leadership position.

While Skelos has not made any indication that he is planning on stepping down and very well could continue on as leader, the fallout of former Assembly Speaker Sheldon Silver’s arrest and subsequent resignation of that leadership post already has many anticipating a similar shift in the Senate.

Several veteran observers say that the next election for majority leader will involve a fight between upstate legislators and the Long Island delegation. Upstate senators are frustrated with Long Island leadership on issues like school aid and economic development, while the Long Island power structure will fight to continue its grip on the leadership.

City & State has broken down the most common names being floated for the position and evaluated the strengths and weaknesses each candidate brings.

PROS: As deputy majority leader and veteran lawmaker, Libous has strong ties to the Long Island senators and the upstate New York senators. Libous is well-liked and respected in the conference.

CONS: That being said, Libous seems to be a highly unlikely candidate for replacing Skelos due to his own impending trial in July. Libous is accused of lying to an FBI investigator in 2010 when he was interviewed about an alleged scheme to get his son a job at a law firm.

In addition to the charges, Libous was diagnosed with cancer in 2009 which has since spread to his lungs and bones. Recently, he underwent spinal surgery from a blood infection caused by the cancer.

PROS: As chair of the state Senate Education Committee, Flanagan is well-versed in the education issues that have dominated the legislative session this year. If Skelos’s arrest does not completely derail the rest of the session, Flanagan could be the best person to step up to the negotiating table on these issues.

Flanagan is from the Long Island delegation, which will fight to keep control of the leadership position. From a numbers standpoint, he could have nine of the 17 needed votes from Long Island alone if Skelos steps aside but stays on as a rank-and-file member.

CONS: There are concerns that Flanagan has been subpoenaed as a part of the Skelos investigation and could be a potential target.

Flanagan has been a supporter of the Common Core curriculum, although he has backed off and suggested reform to the teacher evaluation system. One observer said Flanagan is already facing opposition from the anti-Common Core faction.

JOHN DEFRANCISCO
PROS: As chair of the Senate Finance Committee, DeFrancisco has been heavily involved in the conference’s policy decisions. His experience and knowledge of the conference’s goals would make him a logical choice to get through the final weeks of the session.

He is a veteran lawmaker who is well-respected by most of the conference’s members.

Unlike some of the other candidates, DeFrancisco has not been tied to any federal investigations or other ethics issues.

CONS: Every political observer City & State spoke to said DeFrancisco had emphasized that he has no interest in the leadership position. One went so far to say he is fed up with Albany and may soon retire.

PROS: As chair of the state Senate Republican Campaign Committee, Young has ties to the new members and knows how to raise money.

She is a woman, which would reflect well on Republicans politically after they were hammered over the past few years for their failure to pass the full Women’s Equality Agenda. She would also be a historic pick as the first female state Senate majority leader.

Additionally, Young is chair of the state Senate Housing Committee, and the expiring rent regulation laws and 421-a will be a huge issue in the last few weeks of session.

CONS: Because of her position as chair of the Senate Republican Campaign Committee, Young has ties to some of the real estate developers and companies that are involved in the federal investigations into Silver and Skelos. One political observer went so far as to rule her out completely because of those issues. Following Skelos’s arrest, state Senate Republicans will likely want to pick a leader that will have no potential legal issues and is clean—or at least as clean as can be.

Young was reported back in 2013 to have doubled-dipped the STAR tax relief program and improperly received a tax credit for a condo.

PROS: Seward has not been one of the more obvious candidates floated for the leadership position, but was mentioned by all political observers City & State spoke with. He could emerge as a “compromise” candidate if the upstate Republicans are able to wrestle control of the conference from the Long Island delegation.

Seward has been around for a long time and does not appear to have any federal investigations surrounding him. He’s called a “nice guy,” and keeps a low profile, which could also hurt him.

CONS: Seward has never brought in significant fundraising efforts, which ultimately could hurt him and the conference.

PROS: Griffo has avoided any investigations or accusations of ethics violations.

As a veteran member of the conference he is aware of his colleagues priorities and knows the mechanics of the chamber, which could help guide the conference through the rest of the session.

Like Seward, he is generally liked by all members of the conference and could be a consensus candidate that upstate members and Long Island members could agree on.

CONS: He does not strike observers as ambitious, which could be viewed as a negative within the conference if they seek a permanent successor.

PROS: Gallivan has a lot of respect from the business community.

Gallivan has a background in law enforcement, which given recent federal investigations in Albany could work for him publicly.

CONS: Relative to the other candidates, Gallivan is lacking in seniority. He was elected to the state Senate in 2011.

He was one of the targets of the Moreland Commission, as reported by City & State last year, which suggested he had about $80,000 in “unreported credit card expenses.”

As a Western New York politician, he could face some resentment due to Governor Andrew Cuomo’s economic development efforts in that area. Other upstate regions have criticized the money put into the Buffalo Billion while other areas, like the Southern Tier, continue to struggle economically.

Ashley Hupfl is a staff reporter for City & State, with which The Public shares content.