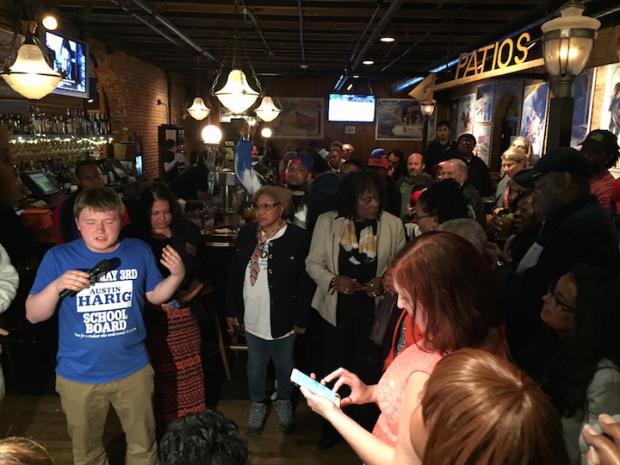 Austin Harig speaks to supporters at Pearl Street Grill on election night. The Hutch Tech senior came close to unseating incumbent Carl Paladino on Buffalo's school board. All of Paladino's allied candidates on the board lost their races.
by
Shane Meyer
/ May. 4, 2016 7am EST

I’m under the impression that publishing a newspaper is not the best way to make a fortune. There are, however, other reasons for owning and printing a daily: peddling influence, stroking vanity, and occasionally, if only incidentally, serving the public interest. Therefore, it must be a blow to one’s sense of power, ego, and conscience to find that one’s investment in the news business cannot even reliably secure preferred results in a school board election.

In Tuesday night’s contest, Carl Paladino, the candidate to whom the Buffalo News’s editorial board gave its most tepid endorsement, was the only one who got over (if he in fact did).  Their other four candidates lost by considerable margins. Paladino, who wouldn’t even deign to outline his positions for the paper’s board, apparently thought he didn’t need their help. Sandy Beach got you, fam.

At the time of this writing, the site ErieElectionResults.com has Paladino beating out 18-year-old Hutch Tech student Austin Harig by 107 votes, with 140 absentee ballots to be counted. In his previous contest, in 2013, Paladino pulled in 2,704 votes (compared to this year’s total of 1,543) while beating his opponent at a ratio of nearly 4:1. Bad news if you advertise on Sandy Beach’s show.

That year 3,439 Park District voters turned out to the polls, 453 more than showed up this Tuesday. 307 more people voted this year in the North District than in 2013, most of them apparently intent on ousting incumbent Jay McCarthy. The turnout was pretty much the same everywhere else, and the differentials in Park and North were a wash. That is to say, turnout was abysmal as usual. Fewer than 10 percent of the city’s eligible voters voted in what the News characterized, in a series of handwringing editorials, as the most critical election facing city voters in years. A few more people made it to the polls, but not many.

Jay McCarthy speaks to reporters after learning he had lost the race. Photo from WBFO reporter Eileen Buckley’s Twitter feed.

The diminished turnout in Park seemed to verify a finding made in a poll conducted by union folks in 2013: Despite the accepted wisdom that Paladino is universally loved in his home turf of South Buffalo and Lovejoy, his approval rating then—before he’d had three years to piss off people—was just 56 percent. Not bad, but not sainthood. His approval rating was far lower in every other part of the city. Bad news, it turns out, if you were running on his coattails this year.

The honorary chair of Trump’s New York GOP primary campaign nearly lost to a previously unknown teenager. Here’s a man who likes to wag his finger at the press, but this time they were standing in his corner and cheering—if only half-heartedly—for their “Streetfighter.” Maybe the Dems should run Harig against Trump is the lesson I draw.

In the West District, where voter turnout was slightly higher this year over last, community organizer Jennifer Mecozzi body-slammed board president James Sampson, who wasn’t actually on the ballot. The News previously wrote that the state teacher’s union was to blame, i.e. “playing politics” by scrutinizing Sampson’s signatures, though there is nothing uncommon about the practice. In 2013, Sampson’s lawyers got the incumbent board chair he was challenging, Ralph Hernandez, removed from the ballot on signature challenges. That year, when Sampson was on the ballot, he only got 611 votes. Mecozzi’s 904 votes would have beat him then just as she did now.

The results of the race between Paulette Woods and Bryon McIntyre in Central closely mimicked the results of three years ago, and six years ago, when McIntyre ran against Mary Ruth Kapsiak: He lost by a few hundred votes both times. A test case for the non-impact of News propaganda.

Sharon Belton-Cottman ran unopposed in the Ferry district, while, in the East, Theresa Harris-Tigg cleaned the clock of the News’s write-in candidate whose name I can’t remember.

The News’s man in the North, McCarthy, lost to Hope Jay by 363 votes (2,236 to 1,873). He was always vulnerable: This was the first time he’d run one-on-one for his seat. In McCarthy’s two previous elections, two relatively likeminded opponents had split the vote against him.

Tuesday night brought positive results overall: The town’s big paper—and their big business buds—can’t install whomever they want on the board, and the so-called reform movement is foundering.

It’s a victory for accountability.