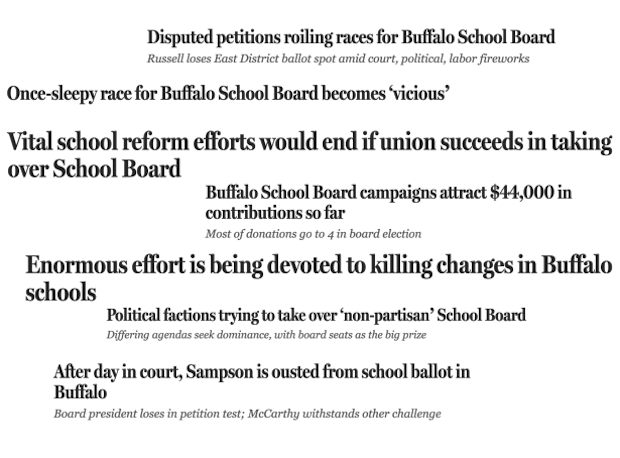 Republished with permission from "Oh, good luck with your Fourierism."
by
The Public Staff
/ May. 3, 2016 12am EST

We’ve never really published an editorial before, but in the light of the nonstop and breathless assault on public education waged by the Buffalo News and its decidedly slanted editorial board, now seems a good a time as any to proclaim there is something rotten brewing in the brutalist cube at the foot of Washington Street.

By the count of one local blogger, the News has published 34 articles in the last ten days—reports and editorials—on the school board race which have routinely reduced the contest to a cowboys vs. Indians affair, making maximum Orwellian use of the word “reform,” as our own George Sax pointed out last week. Reform good, unions bad. To recap, the biggest change the “reform” majority has brought to Buffalo Board of Education is an element of rancor and disorder like we’ve never seen and a revolving door in the superintendent’s chair. One board member’s particular taste for blood has resulted in numerous lawsuits, the defense of which is paid for by taxpayers at the expense of children in a chronically underfunded district.

Seriously, what reform, what progress, what substantial measure has this board majority achieved in three years for the Buffalo News to come out swinging in full force and with the putative backing of every major business leader in the area on the side of Carl Paladino? What version of the future do they really yearn for and what exactly is their foundation for expecting it to happen? The News has attacked the forces fighting against the majority, but has never enumerated why anyone should vote for them. Instead, we get self-assured platitudes. It’s like being at a Trump rally.

Jason McCarthy has been a steady and reliable advocate for improving education. For that, alone, he deserves re-election. He is appropriately proud of the district’s focus on nutrition, a key to any student’s ability to focus and learn.

About McCarthy’s challenger Hope Jay, the News charges that she’s evasive about her candidacy. Similarly, they also criticized Jennifer Mecozzi for lacking an understanding of the “key issues facing the district.” Has anyone ever heard Jay McCarthy speak? Mecozzi, apparently, needs to up her school nutrition game next time she meets with the News editorial board.

Sampson, even-keeled and unflappable, demonstrated strong leadership in making sure that the board conducted a wide search for the right superintendent. Kriner Cash is here because of Sampson’s resolve.

For better or worse, this is an easy endorsement. Carl Paladino has made an important difference on the School Board.

In Trump’s America, self-important bloviation and seething anger is leadership, says the News. He’s certainly made board meetings more fun to watch late night on public access. It’s an easy endorsement because they already made up their mind on Paladino years ago. But what has he actually accomplished?

Despite all his defects – his offensive comments, his bullying, his sometime inability to function effectively on the board – it is because of his influence that the board is even interested in turning around an underperforming district.

Three more years for an avowed asshole who expresses interest in someday accomplishing something, you know, because no one else on the board is interested in turning this thing around. Any person with a “sometime inability to function effectively” should NOT be elected, let alone endorsed by a prestigious daily newspaper.

Graduation rates are up slightly, and that’s to be celebrated. But there’s also this thing called Say Yes Buffalo making it possible for Buffalo students to receive full tuition scholarships to state schools and in some cases private schools that never existed before. That might have something to do with it. (And when graduation rates improve too rapidly at a school the state wants to take over, look out, because someone’s getting placed on administrative leave.)

The two most substantial votes in recent years have been unanimous. First, the amazing 9-0 vote to stave off further privatization of public resources and open new charter schools in BPS buildings brokered by interim superintendent Donald Ogilvie, and the 8-0 vote to appoint current superintendent Dr. Kriner Cash. Charter schools, save for maybe one or two, have been extremely uneven and riddled with problems of their own, and clearly don’t represent a silver bullet to solving the systemic poverty, racism, and inherent inequity of resources faced by all students of Buffalo schools.

None of this seems to matter to the Buffalo News, they’ve instead pumped out article after article demonizing the teacher’s unions (BTF and its parent union, NYSUT), accusing them of staging a political putsch of a non-partisan school board. Why, it’s as if they can’t see that a former gubernatorial candidate dumping thousands of dollars of his own money into his own campaign and that of his allies might politicize a formerly only slightly partisan school board in the first place.

It’s astounding how the News refutes its own reporting. In 2014, their own Tom Precious lead the post-election Sunday edition with a report attacking NYSUT for campaign spending, while publishing a graph showing that charter school and business interests actually outspent the union, and not by a little. Remember this one?

Business forces intent on stripping away the livelihoods of teachers outspend a union with 600,000 members by 10 percent, and the News can’t believe NYSUT even tried to do something about it.

So why does this happen? Why is the News so cozy with the current majority? Led by a president in James Sampson who was found to be misspending state money on personal perks while managing a child welfare agency and steered by the most offensive man in Buffalo in Carl Paladino, how can the News in good faith endorse these people? You can’t walk two feet into a guidance office in any school and not encounter anti-bullying placards, yet the News wants this bully to continue his incoherent and often creepy presence on the school board?

Some have posited that Buffalo News owner and $30 billion Gates foundation donor Warren Buffett has something to do with it. The Oh, good luck with your Fourierism blog post points to a web of business interests, in which the News may be playing survival mode while the print media industry continues to weather the scourge of internet, smart phones and Facebook, reposting a graph from the “public secrets” project known as little sis that puts board member Larry Quinn at the center and points out that the News pays the Buffalo-Niagara Partnership annual dues of $50,000.

The Buffalo News has a major credibility issue when it comes to reporting on education. You can’t consider their endorsements without considering a mountain of bias. Anyone else notice that since reporter Sandra Tan’s email to Carl Paladino was uncovered a year ago, in which she begged for Paladino’s forgiveness, she’s been taken off the education beat?

They have capable and good reporters, but these reports are often slanted in their framing and the editorial bias peeks out from every piece on education they publish. Again, it’s been 34 articles in 10 days, but the time you read this, maybe another one or two have hit the wire. The kind of hand-wringing the News has promulgated over potentially losing the majority bloc would make you think they’re afraid that the democratic process itself is an injustice. To cover themselves, they poked holes in democracy itself, hedging their bets by pointing out that no one really votes in school board elections anyway.

Sampson couldn’t get enough signatures in his own district to get on the ballot. Jay McCarthy had a hell of a time doing the same. Young Austin Harig gave Paladino a run for his money on WBEN last week and has curried a surprising base of support city-wide, we’ll see about the Park District. These folks just aren’t that popular. If they had achieved any of the progress the Buffalo News lauds them for, people would be clamoring to keep them. The only people in the city clamoring happen to all work at One News Plaza.

Update: Just this morning, the News published their likely final editorial in the effort to impact the school board race. It includes this fantastic sentence:

This is the day that voters in the Buffalo School District will decide if public education is about students or about pressure groups that want to control the agenda for their own benefit.

As if the News isn’t its own pressure group, as if the unions are intimidating people into the voting booths, as if Paladino and Sampson, as landlords as trustees to charter schools, weren’t already trying to control the agenda for their own benefit.