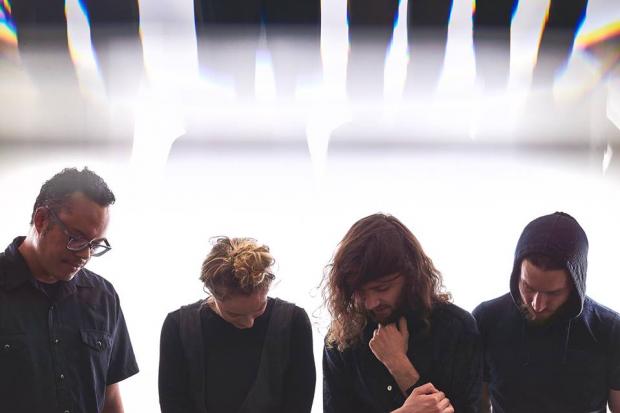 It’s always exciting when two singular artists come together to work on one project. In this case it’s Buffalo-based musicians Suzanne Bonifacio, who has performed locally as Space Cubs, and Shawn Lewis, popularly known as Lesionread, who have teamed up to flesh out Bonaficio’s solo project into a full band along with Ken Culton and Adam Pressley. Both Bonifacio and Lewis are musicians who come from the more experimental end of the electronic music spectrum—Bonifacio as a solo artist behind a computer screen cranking out dark, broken, magical beats reminiscent of early Caribou and Four Tet, and Lewis dressed in a one piece red body suit, leveling up his ecstatic electro party music, sending cardboard robot mascots and GoPro cameras into his crowd. What they’ve created now, under Bonifacio’s alias Space Cubs, is different still than anything either has made; strange, ambient, jazzy and organic and electronic all at once. A few weeks ago the band debuted their new record What Iff with a show at Mohawk Place, and this Friday, May 4 they’ll return to the Downtown venue for a show with the Chicago-based experimental indie rock band OHMME. This week we spoke with Bonifacio about the pivot from solo project to full band, and the challenges and joys involved in adopting a new philosophy toward her music.

What Iff is the first record with the new line up.
Yeah, yeah, this is the first thing we’ve put out as a band. The song “What Iff,” was the first song we started working on together.

How did the writing partnership with you and Shawn Lewis A.K.A. Lesionread come about?
I was living in North Carolina but was moving back up here and he found out, so he reached out to me and asked if I would do part of his tour with him. I ended up touring with him for a week and we started making music together just because we were hanging out a lot. I toured as Space Cubs by myself, and then we toured as Lesionread. It was only four shows, but it was enough to get to know each other better and start making some stuff. Then we did a split [record] together the next summer, so half the songs were his and half the songs were mine. We’ve kinda just been working together all year. I was looking for people to play with and he was still doing Lesionread and he was helping me try to find people, and finally he was like “let’s just do this.”

How has this changed your approach to music?
The new stuff is a lot… I don’t want to say happier, but kind of happier in a way, but also, it feels a little more settled. Stuff we’re working on now is more chaotic and dark again, but not really similar to my old stuff in a pretty way. New, new stuff is a lot of talky singing type stuff. A lot of the stuff Shawn starts working on is very atonal, so when I feed off of that it comes out kind of talky. [What Iff]is more laid back and chill.

Compared to your previous music, which had more of an electronic vibe, the new stuff has more of a jazzy, ambient vibe.
Yeah, yeah. Having Adam [Pressley] involved in that writing process, it’s changed a lot of things as far as giving it more of an organic feel. Especially with “Quitting,” and “What Iff,” he added so much. “Quitting” almost has like a little bit of a slidey folky vibe, almost southwestern sounding. Which is cool. I didn’t anticipate it turning out like that.

How does it feel going from more of a solo thing to a full band?
It’s really great as far as the live setting goes. I really wanted to be freed up from being behind a computer and everyone has been really amazing about giving me room to do that. It’s been great with the writing process too because I can focus, hone in a lot more, taking extra time with the vocals and experimenting with new things. Shawn and I have very different work flows. Shawn is very detailed in his sound production. It’s been cool to experiment with that.

Is it a challenge to change the way you write music?
It’s interesting because I haven’t been listening to as much music as I used to. When I was in high school I’d listen to as much music as I could and soak everything in all of the time, but I don’t do that as much anymore. I don’t know if it’s because I’ve been making more music or what it is, but I guess what I mean to say is when I really connect with something I can tell the ways it influences me more now. It’s definitely been a challenge as far as ultimately sacrificing for the vision of the piece. When you play with people it’s everyone’s vision combined. We talk a lot about making sure it’s shared and that we all kind of have a say. And keeping in mind the end product, not necessarily what one person wants, but what we can all agree on. Keeping that in mind is important as a band and I’m realizing that it’s good to, I don’t want to say compromise, but sort of put yourself aside and think about what works the best for a certain piece.

What’s in the future for you guys?
We want to put out another long section of songs soon, most of them with kind of a darker tone, then we’re hoping to do a three week tour in the summer. We’ll see. I tend to get ahead of myself but I’ve been trying to focus more on every show as a separate thing. We definitely want to play more in Buffalo. We’re working with some people in Philly who are putting our tape out; their label is called Super Whimpy Punch. They’re coming up and helping us, which is super great. So we’re getting a lot of good support.