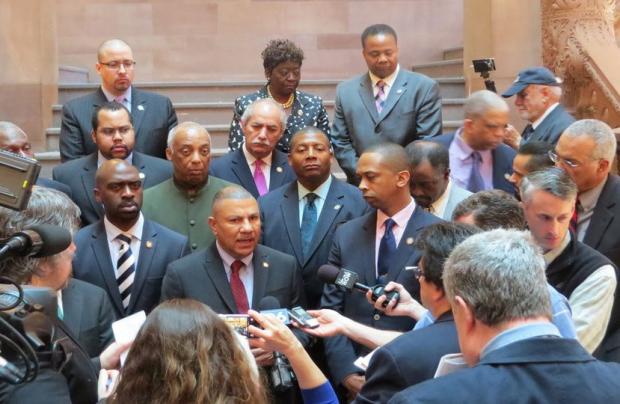 Assemblyman Philip Ramos and fellow members of the Black, Puerto Rican, Hispanic and Asian Legislative Caucus call for criminal justice reforms on the Million Dollar Staircase at the state Capitol on Wednesday. (Ashley Hupfl)
by
Ashley Hupfl
/ May. 1, 2015 11am EST

As the nation continues to watch the turmoil in Baltimore following a black man’s death while in police custody there, Democrats in the New York State Legislature are renewing a push to pass criminal justice reforms before the session ends in June.

“Baltimore is not just Baltimore, Baltimore is happening in the Bronx, it’s happening in Brooklyn, it’s happening in New York City and New York State,” said Assemblyman Michael Blake, a member of the Black, Puerto Rican, Hispanic and Asian Legislative Caucus, which will present a new package of reforms to Gov. Andrew Cuomo. “This is personal for me. I have two brothers who have been incarcerated before. I know the challenge of being pinned up against a cop car for doing absolutely nothing wrong.”

The caucus is still putting the finishing touches on its reforms, but members said grand jury transparency, raising the age of criminal responsibility and uniform police-confrontation policies were all being discussed.

The caucus will also seek funding for criminal justice diversion programs that would aim to create more job and education opportunities for those convicted of crimes, and is exploring the possibility of giving formerly incarcerated individuals an opportunity to expunge their records.

Arguably the most controversial reform is a bill that would give the state attorney general special prosecutorial powers in cases where public trust in the criminal justice system is at stake.

On Tuesday, Cuomo said he would use his executive powers to appoint a special prosecutor for cases involving police killings if the Legislature failed to act by the end of session.

State Sen. Gustavo Rivera, who sponsors his own special prosecutor bill in the Senate, told City & State that caucus members met with the governor Wednesday morning to discuss how to move forward with the reforms.

“It is the hope, expectation and obligation of us that represent communities that are being impacted by what is ultimately an unjust system to put pressure on those who are standing in the way of this necessary change,” Rivera said.

The main roadblock to criminal justice reform is the Republican-controlled state Senate.

“There is a phrase in Spanish: No hay peor ciego que el no quiere ver. There is no worse blind man than he who does not want to see,” Rivera said. “The Republicans are ignoring the facts on the ground, the facts in front of them. We must change the system and there are a lot of ways we can do it and we want to do it with the policy package we’re going to present to the governor.”

Ashley Hupfl reports for City & State magazine and appears in The Public courtesy of a content-sharing agreement.