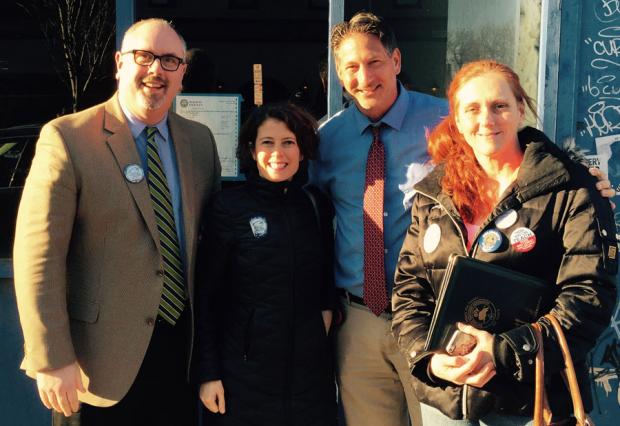 BTF Rising and Renew BTF, the two slates challenging longtime Buffalo Teachers Federation president Phil Rumore in May’s election, have similar lists of grievances with the union’s management over the past decade. At the top of the list is the lack of a new contract for Buffalo teachers since 2004, making them “some of the lowest paid teachers in Western New York,” while facing “some of the greatest educational challenges in the region,” according to BTF Rising.

Numbers given by Renew BTF support the claim: Given a 30-year cumulative salary, Buffalo teachers make about half a million less than their Lackawanna, Sweet Home, and West Seneca counterparts, and about $200,000-$350,000 less than their counterparts in Kenmore, Orchard Park, Frontier, and Depew.

Following the conclusion of the “step case” in March 2013, the union and district looked to an independent fact-finder to intervene in contract negotiations. Speaking with The Public, Rumore said that, while it would have been “politically expedient” to do a contract following the conclusion of the step case, the current Board of Education has made offers that are “unacceptable.” He says that if he were a less shrewd man and more inclined to go along to get along, their offers would have been “easy” to accept. Rumore also noted that the fact-finder’s findings regarding teachers’ earnings were not heeded by the district, and so BTF and the district remain at their familiar impasse.

<>Common Core testing is another hot issue undertaken by the Renew and Rising slates. Both tickets are generally critical, though Renew more rigorously, criticizing CC’s roll out, “narrow fixation on standardized testing,” design, interference with “authentic learning,” interference with the craft of teachers, mischaracterization of “failing schools,” and undermining of local control.

<>In response to criticisms leveled against the union’s perceived lack of leadership against Common Core, Rumore was adamant that BTF has been supportive. One teacher told me that he was told to “be quiet” on Common Core—a statement Rumore called a “lie.” He added that BTF has a link to opt-out info on its web page and only told teachers, via an “Albany attorney,” that they should “be careful” when broaching the subject with parents.

Here, the criticism of State Education Department chancellor Merryl Tisch—that the opt-out movement is the product of a union campaign to dupe credulous parents—runs up against some discomfiting facts.

Whether or not Rumore is faultless regarding the union’s position on opt-out, it is a matter of fact that Rumore, at least in Buffalo, has not been a major force behind the opt-out charge.

In any case, the novelty of misguided parents under union influence was quickly discredited as Tisch wised up to opt-out’s broad appeal, turning on Cuomo in the process.

Fred LeBrun speculated on the about face from the Board of Regents in the Albany Times Union:

“Recent changes on the board got rid of rubber-stampers and brought in more thoughtful independent voices. The current Board of Regents is no longer viewed as Tisch’s, and individual Regents are speaking out over the concerns raised by the opt-outers, and by overwhelmed school officials statewide,” he wrote.

For its part, Renew BTF notes that it has, via the Council of Delegates—the union’s legislative arm—already passed five resolutions regarding local education policy: an objection to APPR that did not appropriately account for ELL, special populations, poverty, and attendance; a rejection of the student data scooping service InBloom (“a serious privacy violation for students”); a resolution to end the controversial “sit and stare” policy for those students who opted out of CC; a disavowal of the BOE majority’s vision statement; and, more recently, a call for the district to recognize the actions of the Ken-Ton school board in protest of CC.

The members of Renew also believe they have an advantage over Rising given their persistent presence at board meetings, dogged opposition to the Board of Education majority’s vision, and participation in organizing against the education reform movement in general. Renew also points out that their slate represents four different district buildings and three discipline areas.

Even a teacher not terribly interested in the outcome of the election might pause over the reflection that having three candidates for president (Mark Bruno of Rising, Patrick Foster of Renew, and Rumore) will lead to an unnecessarily antagonistic competition. Renew and Rising have both expressed the hope that, should the incumbent not get the required 50 percent of the vote, there will be a run-off and an outpouring of interest in the race. I am told that previous union elections have not garnered great interest, with only a third of total membership casting mail ballots.

Its public relations difficulties aside, the BTF and its leadership are here to stay. In the early 20th century, before the age of unions, urban schools coasted on 15 percent graduation rates. There’s a reason it’s called the Gilded Age. The professionalization of, and subsequent fair pay for, the instructing class has been a good thing. Those who complain of teacher salaries strike the dissonant chord of resentment if not ressentiment. Not a good look. I am of the opinion—probably like most whether they’d admit it or not—that if money’s on the table one should grab as much as possible. Let’s save the platitudes for another day.