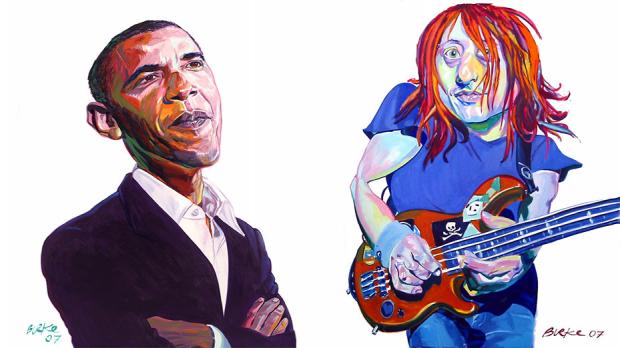 Bill Murray looks more like Bill Murray than Bill Murray himself in the caricature portrait by artist Philip Burke, in a career overview exhibit at the Burchfield Penney Art Center. Because of the way caricature—when superbly done—gets to the heart of the matter, reduces to essence, eliminating extrinsics and extraneous.

On the wall next to Kurt Vonnegut—who looks in his caricature a lot like his aspirational model Mark Twain—his quote about “we are what we pretend to be…” The subjects of the caricatures are celebrities mainly—from music or athletic or political realms—so particularly given to pretending. Part of getting to the essence is indicating how well they manage the pretending. Frank Zappa as music realm gray eminence very well. Rafael Nadal as giant-killer extremely well. Some of the politicos as statesmen not so well at all.

This exhibit is a local boy makes good story. Burke was born and reared in Buffalo, but in the mid-1970s—his early 20s—made his way to the West Village in New York City, where he began drawing—pen-and-ink caricatures at first—for the Village Voice, then Vogue, Vanity Fair, and The Progressive, before landing a regular gig with Rolling Stone from 1989 to 1995. Somewhere around the mid-1980s he switched from ink on paper to paint on canvas, in bright and lurid and improbable colors in wild array. Lessons from the Fauves. Since Rolling Stone, he’s done cover and other art for publications the likes of Time, Newsweek, Sports Illustrated, and the New York Times. Some of the issues featuring his artwork are on display under glass.

Most of the hung work is from the colorful paint on canvas years, but some earlier pen and ink work as well. Including a laugh out loud funny political cartoon from 1981 of Ronald Reagan and then Libyan leader Muammar Gaddafi. Gaddafi as a mosquito on Reagan’s oversized nose, at which—the mosquito, not the nose—Reagan is aiming a pistol, about to fire a bullet that may annihilate the mosquito but will continue straight on into his—Reagan’s, not Gaddafi’s—aiming eye.

It had to have helped the artist to have been precocious. Among the black and white drawings is an accomplished caricature drawing he made for a school project at age fifteen—fifteen—of novelist Henry James as a gimlet-eyed cat with binoculars that have eyes of their own, just in case. A feline upon which nothing is lost.

For Rolling Stone, there’s a portrait of Kurt Cobain with a spacey angelic look and little wings. A note next to the painting says it was done within a month of Cobain’s demise, and when it was published, the Rolling Stone editors deleted the wings, “fearing they glorified the musician’s suicide.” They should have been so fastidious about the campus rape piece.

Among the politicos, George W. Bush gets off pretty easy. A drawing of him from 2014 as gentleman cowboy, white shirt, hat but no cattle, sporting a holster and it looks like drawn six-gun, at his hip. Anyway, armed and dangerous, though not as dangerous as when he could start wars on a whim that would kill hundred of thousands or millions.

Dick Cheney is there, malicious snarl, the picture of evil incarnate. And Donald Rumsfeld lost in the fog of Donald Rumsfeld. And Richard Nixon, beady eyes barely visible amid the ample jowls and ski jump nose and hunch posture. Chris Christie framed by one of the ironwork archways of the George Washington Bridge, his head and face just about filling that frame. And Rush Limbaugh with his brain on fire.

Among the Democrats, respectful caricature portraits of Barack Obama and Michelle, but a Hillary Clinton in the guise of Queen Elizabeth I. And multiple portraits of Bill Clinton, in various guises.

One section is of Burke self-portraits over the years, proceeding from more or less straightforward to more caricatural indulgence, with Picasso reference distortion effects. But an early on self-portrait as Picasso in his studio, standing at his easel.