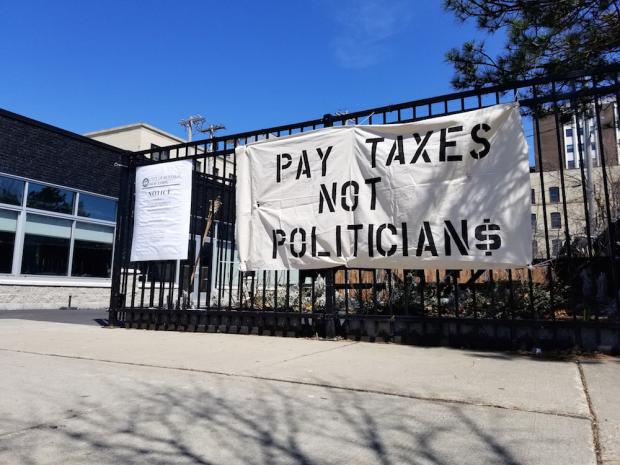 Activists just dropped a banner at the corner of Elmwood and Bryant, where a partnership between developers Nick Sinatra and Carl Paladino has proposed a five-story building requiring variances under the city’s Green Code, which has many neighborhood residents up in arms. The organizers of the banner drop sent this explanation to The Public:

Real Estate developer Nick Sinatra feels entitled to play by his own set of rules, withholding more than $1.2 million in property taxes he owes to the people of Buffalo and Erie County and calling it a “business decision.”

In recent weeks the Public Accountability Initiative and the Buffalo News revealed that Sinatra owed so much in back taxes that foreclosure proceedings had been initiated on several of his properties, including his headquarters in the Market Arcade building. In all, Sinatra owed more than $1.2 million in taxes that he gave no indication that he intended to pay until his delinquent bills were revealed publicly.

Instead of paying his fair share to fund the infrastructure and social services that he benefits from, Sinatra was instead funneling money personally and through his various LLCs to various local politicians – including his business partner Congressman Chris Collins and Mayor Byron Brown – and securing taxpayer money to fund his projects through the Erie County Industrial Development Authority.

The people of Buffalo have had enough of the greedy “business decisions” that are driving gentrification and displacement and extracting the wealth of our city to line the pockets of Nick Sinatra and his billionaire financial backers.

Today we are calling on Nick Sinatra to pay his taxes, NOT politicians.