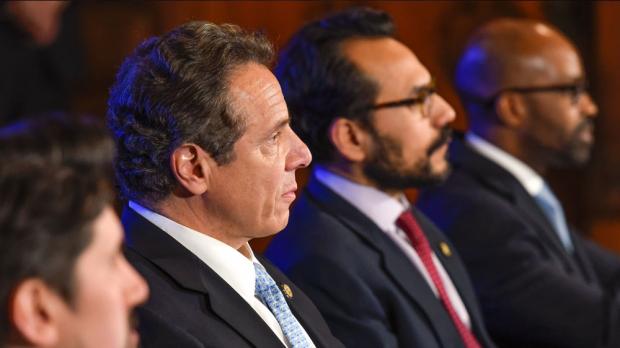 State lawmakers were getting restless.

Joe Percoco, Governor Andrew Cuomo’s right-hand man, had been subpoenaed last year as part of an investigation into the Buffalo Billion, the governor’s marquee economic development program. By autumn, Percoco was indicted, along with seven others, in a case that laid out allegations of bribery and fraud involving “hundreds of millions of dollars” in state contracts. Individual lawmakers openly criticized the governor and demanded greater oversight of the state’s economic development funds.

The tone grew sharper heading into the 2017 session. Unhappy with their failure to secure a pay raise, lawmakers grumbled privately about exacting revenge by breaking Cuomo’s streak of timely budgets. State Senate Majority Leader John Flanagan promised to “stand up for the primacy and independence of this body, which is long overdue.” For the first time, Flanagan and Assembly Speaker Carl Heastie skipped Cuomo’s State of the State speeches.

At a budget hearing in February, lawmakers unleashed another attack on the lack of transparency with the administration’s regional economic development councils and the lackluster results with its Start-Up NY program. “You painted a rosy picture of our economic development in New York state,” state Senator Phil Boyle told Howard Zemsky, Cuomo’s top economic development official, “but obviously anybody who reads the newspaper and sees the media knows that there’s true problems.”

In the end, the problems weren’t nearly enough to derail the governor.

While Cuomo suffered the minor embarrassment of delivering a late budget, he achieved most of his top policy goals—raising the age of criminal responsibility, expanding ride-hailing services to upstate and funding his free college tuition program. He fended off attempts to bring transparency to his economic development programs, despite the negative publicity brought by the Percoco scandal. An additional $500 million was approved for the second phase of the governor’s Buffalo Billion economic development initiative, and it went through even before the final budget deal was reached.

Even more remarkably, Cuomo strengthened his already considerable leverage over the state Legislature, including new powers to adjust the state budget if significant federal funding cuts occur and the creation of an inspector general to root out managerial misconduct at the Metropolitan Transportation Authority and the Port Authority of New York and New Jersey.

The Cuomo administration dismissed concerns about the governor’s growing powers, arguing that the times called for them. “Given the current federal landscape and the amount of taxpayer dollars invested in large-scale downstate infrastructure projects, these measures are both prudent and necessary,” Abbey Fashouer, deputy communications director for Cuomo, said in a statement. “There’s advocates for everything, including apparently chaos, uncertainty, and lack of accountability. That, however, is no way to govern.”

Others say it’s just the latest chapter for a governor who is frequently described—even by himself and his aides—as a “control freak.”

Assemblyman Robin Schimminger, a Western New York Democrat who has assailed the opacity of the Fort Schuyler Management Corp. and Fuller Road Management Corp., the two major state-affiliated entities at the heart of the federal probe, and the lagging job creation numbers from the Start-Up NY program, said the label clearly fits.

“I would certainly agree with the governor when he makes that self-characterization,” he said.

What was obvious during this round of budget negotiations was just how much leverage the governor has in a process where legislative leaders can apparently do little more than make suggestions and raise the specter of discord as they move toward the end of session.

“Like it or not,” Schimminger said, “the governor is the driving force in the enactment of a state budget and, in almost all cases, he wins.”

Any assessment of Cuomo’s governing style starts with his father, the late Governor Mario Cuomo, who served from 1983 to 1994. Mario Cuomo, who brought Andrew Cuomo with him to Albany, was very hands on, much like the younger Cuomo is now. But unlike his son, the elder Cuomo took on too many priorities and many failed, said Bruce Gyory, a veteran Democratic consultant.

Another longtime political observer said Mario Cuomo was known for his oratory skills and lofty ideas, but was not as disciplined as his son. “When we judge chief executives, we either tend to get down on them for being either control freaks if they’re hard workers—Mario Cuomo fit into that. If you’re not hands-on enough, we make fun of you for not having your hand on the pillar, like de Blasio comes to mind,” the source said, referring to New York City Mayor Bill de Blasio. “That is the critique of hands-on governors, hands-on governors are always accused of overreaching—and sometimes they do.”

Since becoming governor in 2011, Cuomo has prided himself on restoring order to Albany and having on-time budgets after years of dysfunction. Before him, the budget cycle used to go into the summer months, far past the April 1 deadline. Each year, he also puts forward a few big proposals—legalizing same-sex marriage, instituting a property tax cap, raising the minimum wage—and has frequently followed through on them.

“His leadership style is, get out of my way,” former Assemblyman Richard Brodsky said. “Now, in a way, it’s worked very well for him because you don’t hear talk about dysfunctional Albany anymore. And that may have political benefit or not, but under Cuomo, government functions. You may not like what it’s doing, but it’s functional.”

While they battled against him this year, legislative leaders ultimately applauded the governor, at least publicly. Flanagan and Heastie issued statements praising the final budget deal. Jeff Klein, the leader of the state Senate’s Independent Democratic Conference, was the only legislative leader to reply to a question about the governor’s growing powers, including the ability to react to federal cuts. “The governor has been good about engaging the Legislature on important financial decisions that impact New Yorkers,” Klein said in a statement. “This emergency measure gives legislators 90 days to act before any action can be taken by the executive to address potential federal cuts to Medicaid and state operating funds.”

Cuomo’s long history in government partly explains his controlling nature, one observer said, since he knows what it takes to get things done. But that has also gotten him in trouble in the past. Notably, he was under federal investigation for his meddling in the supposedly independent Moreland Commission he created and abruptly disbanded. His much-touted Buffalo Billion and other economic development plans became a liability when charges were brought against Percoco and other Cuomo associates.

“It creates its own set problems. Occasionally he looks around the room and says, ‘I had nothing to do with it,’” Brodsky said. “It’s very hard to make that case when the central point is, ‘I’m the governor, I can do what I want.’”

And in New York, the state Legislature has limited powers to stop Cuomo. A big part of that is the landmark Silver v. Pataki case, in which Assembly Speaker Sheldon Silver brought a case against Governor George Pataki to challenge his budgetary powers. However, the state Court of Appeals ruled in favor of Pataki. “The state Court of Appeals gave him this power, what is he supposed to do? Ignore it? Who would ignore that power?” Brodsky asked. “No other governor has ignored it. If there’s any critique here it’s that he perfected it. That’s not the same thing as abusing it.”

While Cuomo does have extraordinary powers—the most recent edition of the textbook Politics in the American States: A Comparative Analysis lists New York’s executive office as the sixth most powerful in the nation—governors have been gaining power across the country, said Gerald Benjamin, a political science professor at SUNY New Paltz, who has been watching New York State politics for more than five decades. “What’s happening in America is very troublesome, which is to further empower executives and diminish legislatures,” he said. “It’s happening at every level.”

The approval of new powers allowing the governor to make cuts to the state budget to confront any federal cuts is unprecedented. Cuomo’s executive budget proposal would have gone even further, allowing the state Division of the Budget to unilaterally make cuts in response to any revenue shortfalls that would impact aid to localities and state operations. It also would have allowed the governor to increase spending in certain areas.

What ultimately went through gives Cuomo the ability to institute a savings plan after the budget’s been passed to deal with any federal cuts. It allows the governor to propose a deficit reduction plan if there’s federal cuts to Medicaid over $850 million or if cuts to all other programs total more than $850 million. The state Legislature could make changes to the governor’s changes. If they failed to act, the proposal would automatically be adopted after 90 days.

“On the governor’s ability to institute a savings plan, the CBC is generally supportive, certainly compared to the executive’s proposal, which we thought would have provided too much power to the executive,” said David Friedfel, director of state studies at the Citizens Budget Commission. “The way it was set up was better than what was proposed, the fear would be that the governor’s proposals would not get a full hearing, but with 90 days and that plan being public, the proposed cuts should be seen by the public and they can react to their elected officials.”

Even with limitations, the change is unusual, Friedfel added. After the financial crisis in 2007-2008 and after the 9/11 terrorist attacks on the World Trade Center, governors did not seek the same kind of executive powers. “It’s certainly different from what happened post-9/11 or after the financial crisis where the governor’s proposed cuts like any other budgetary matter and the Legislature negotiated and the plan was done,” Friedfel said.

For better or for worse, Cuomo will continue to have the executive powers to get his way—which could once again leave him well-positioned for another re-election bid in 2018, or even a potential presidential bid in 2020.

“In the end, the fairest thing you can say about him is that he should be judged on the end result,” Brodsky said. “The end result is sometimes good, sometimes not.”