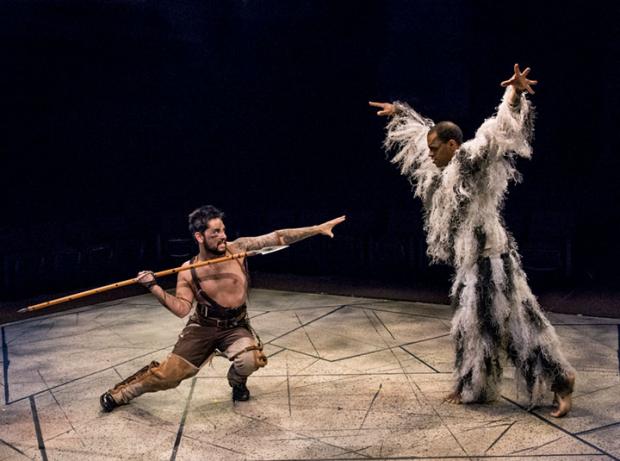 This weekend the Irish Classical Theatre Company presents an unusual and ambitious project: In collaboration with Lehrer Dance and Torn Space Theater, the Irish present The Yeats Project: Two Plays by W. B Yeats. The two plays are The Land of Heart’s Desire (1894), in which a recently married woman in enthralled by the world of fairies and spirits and eventually lost to that world, and At the Hawk’s Well (1916), one of five plays Yeats wrote based on the myths of Cuchulain, a legenday Irish hero of the Ulster Cycle of stories.

Both are in verse. William Butler Yeats’s poetry is part of the canon of English-language literature; during his lifetime, he was also a prolific playwright, and a founder in 1904 of Dublin’s Abbey Theatre, whose mission was congruent with Yeats’s individual vision: to explore new forms of expression, to celebrate and (most importantly perhaps) to define an Irish literary tradition separate from England’s. His plays—particularly the verse plays, and especially the later verse plays, which are very deliberately staged with Noh-inspired movements, chanting, and dance—are rarely performed anymore, though frequently read by undergraduates studying English literature. But a hundred years ago, they were arguably as vital as his poetry to his contemporary reputation and to his goals as an artist.

This week the Irish Classical’s artistic director and co-founder, Vincent O’Neill, spoke with The Public about The Yeats Project and the pleasures of working with Lehrer Dance and Torn Space Theater.

Start by telling us why you chose Yeats.

Certainly one of the reasons we did it is that I’m a huge Yeats fan. I see him as the forerunner of Beckett in many, many ways. I think he’s really important and I love him as playwright. I did many of his shorter plays in my time at the Abbey—in the Peacock, which is the experimental theater underneath.

Of course, Yeats is primarily known as a lyrical poet—a Nobel Prize-winning poet and arguably the greatest poet of the 20th century. But most people don’t think of him as a playwright, with rare exceptions—maybe his Oedipus Rex or On Baile’s Strand. But for the most part they don’t. Now, when you grow up in Ireland with the Abbey tradition, because he’s one of the founders they do Yeats on a quasi-regular basis. So you’re exposed to it, and you grow up with it. But outside of Ireland, it’s not done; even in Western Europe it’s not done.

But the real reason we’re doing it is because it’s our 25th anniversary for Irish Classical. We’re just coming off the back of the 150th anniversary of Yeats’s birth. And I come from the Abbey Theatre: That’s where I trained as an actor, where Chris [O’Neill, Vincent’s late brother and co-founder of the Irish Classical] trained as an actor. We were both in the company for five years, toured the world. I just thought: How appropriate that on our 25th anniversary we should connect with someone who is at the roots of where Chris and I came from, in terms of our literary tradition.

Why these two plays in particular?

I went back and read the plays and I found a very interesting connection between The Land of Heart’s Desire and At the Hawk’s Well. The most obvious one is this: The Land of Heart’s Desire he wrote when he was 29, and it was the first play he had produced before actual human beings, though he’d written others before. And then At the Hawk’s Well comes 22 years later, at the beginning of his Noh phase, under the influence of Ezra Pound. He’d become fascinated with Japanese culture. He was influenced by [modernist theater pioneer] Gordon Craig. He had such concrete view of what his poetic drama should look like, and it was very different than the other plays they were doing at the Abbey—Lady Gregory and John Millington Synge and all that.

The stage direction he writes alone is remarkable reading.

Oh, it’s wild! He’s such a strange, esoteric buzzard. When he first did At the Hawk’s Well in 1916, he did it at Lady Cunard’s drawing room somewhere in London. The advantage, he said, of doing it for little old ladies was that they were very selective in who they invited, so he’d have a completely aristocratic and non-democratic audience. He was an arch-conservative, but in a strange way genuinely a radical.

Certainly he was a radical artistically.

Yes. I think in his social life he was the farthest thing from a radical you can imagine, but artistically he was. The man was always looking for new forms and new modes of expression. And he was constantly revising his work. Even The Land of Heart’s Desire, which was his first play: Three months before he died, he said, “I’ve revised it again.” There was one line…in one verse, he’d changed one line, and this was his revision: It was almost perfect. And he’s probably turning in his grave now, thinking about that one phrase.

Here’s the interesting thing: When you hear the actors—and we have an amazing cast, very experienced, so they’re really, really good—but if they get one word wrong, it really screams at you. And you realize how perfect the rhythms and the assonances…the whole poetic undertow of the language is so subliminally correct that if you get it wrong, it screams at you.

So the reason I chose these two plays was that connection between his beginning as a playwright and then his full maturity as a playwright. And also, you know, I think

Yeats, he wrote The Land of Heart’s Desire, by his own admission, as a reaction to his having been turned down my Maud Gonne in his proposal of marriage. The central character is a young woman who has just got married in heroic times in Ireland, and she’s reading a book about fairy tales and ghosts and the spiritual world, invisible powers, and she gets fascinated by it and then she gets lured into that world. As with most things with Yeats, it was quasi-autobiographical: He was thinking, “What is this invisible world that is attracting Maud Gonne that she would not want to accept my proposal?” There must be some strange spiritual world out there that’s “knocking with bare knuckles on her heart,” as he says.

The other play, of course, was when he was 50, and he’d been solidly rejected by Maud Gonne and several others, including Iseult, who was Maud Gonne’s daughter. He’d tried the whole family. He was always very aware of mortality, but at this point, at 50—I suppose 50, at that point, in 1916, was very, very different from now, in terms of longevity—he’d become very aware of his own mortality. And that he’d never had a family, he’d never settled down, he’d never had a wife. Outside of his works, he had no legacy to leave, no progeny. So he was thinking of settling down. The Old Man in At the Hawk’s Well has been waiting at the well for 50 years. And, you know, with great writers like Yeats or Beckett or Synge, these things are never accidents. There are no accidents. Marcel [Marceau, with whom O’Neill studied mime] used to say to us, “L’art est jamais un accident.” Art is never an accident. It is always deliberate, or subliminally deliberate.

Truly I do not. I’m more concerned with where Yeats was at, and his evolution. In some sense he a was forerunner of what came later on, in terms of different movements like Theater of the Absurd, Expressionism, Theater of the Ritual.

I think if you stage Yeats as he was probably staged back then for a modern audience, it might be too esoteric and inaccessible, and just not dramatically engaging. Luckily we have such a vibrant arts scene here…companies like Torn Space that are genuinely courageous and experimental and pushing the barriers. And in the dance world, you have Lehrer Dance that are incredibly dynamic and acrobatic, and what they do is inherently theatrical. They blend the narrative and the theatrical and the dramatic and the choreographic into a single entity that is really impactful for an audience.

The relationship between Lehrer and I is really, as Oscar Wilde said, a marriage made in heaven—and Wilde was no friend of marriage. But artistically we really see eye to eye. And then Dan Shanahan and his troupe bring a really fresh perspective on design elements: Brian Milbrand’s video productions, Todd Lesmeister’s sound score…I think it’s an extraordinary production. Truthfully, none of the three companies could have achieved it on their own. If ever there was a collaboration that employed the strengths of each company, this is it.

Without any self-flattery, I hope that this chemistry of different talents that we bring to bear on it will release the power of the language. Because it is magical.

Tell us about what each company brings to the production.

Basically what Irish Classical are bringing to it is the awareness of Yeats, his vision, his mission. The language, the poetry, I suppose the dramatic flair, the sense of characterization, the accessibility. I think what Lehrer Dance are bringing is an extraordinary element of—because both plays are about the real world and the spiritual world, or the mortal world and the immortal world, or the tangible world and the world of spirits and powers—Lehrer Dance bring that invisible world to life. They actually become the vegetation; they become the forest; they become the fairy world; they become the elements of air and fire and water, as well. They create that other world. What Dan [Shanahan of Torn Space] brings, with the video projections and particularly with Todd’s soundscape and Jess Wegrzyn’s costumes—and we have our own resident genius, Brian Cavanagh, doing lights—what they bring is a very powerful dramatic flair to all the other aspects. I think the design elements that Dan brings makes the language really accessible; it could be a little esoteric and, dare I say, even a little old-fashioned if it didn’t have that approach.

Those elements of the spectacle seem necessary to plays like these, that are so dense in language.

The tightrope always is how can you achieve that level of spectacle with the theatrical, dynamic force, and at the same time not bury Yeats’s poetry under the avalanche of concept and design. You still have to tell the story. Derek Campbell, the director, always told me, “Tell the story. Tell the story. That’s your job.” And all these elements serve to illuminate and elucidate the story rather than bury it.

The Yeats Project runs for three weeks only (April 22-May 8) at Irish Classical Theatre Company’s Andrews Theatre. Get tickets online now or purchase them through ICTC’s box office: 716-853-4282.