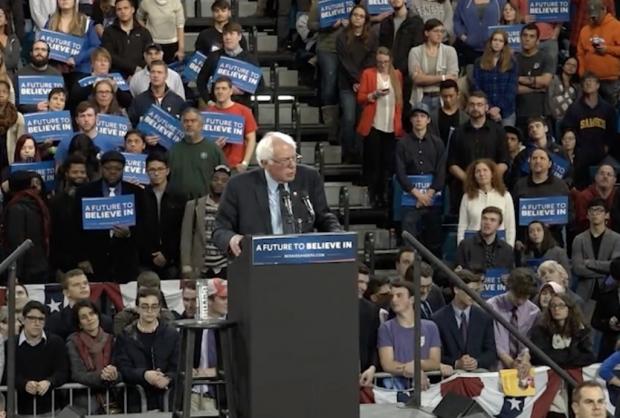 Standing outside in the rain, surrounded by media people, I overheard someone say something about “being objective.” I thought about that, but not too hard. I was waiting to go into the Bernie Sanders rally at Alumni Arena, University at Buffalo, which is where I went to school incidentally. I never set foot in Alumni Arena during college and only once after to see a very bad Bob Dylan concert, so my mood was circling the abyss of bad memories.

Once inside, I saw a little girl, maybe four or five, wearing a homemade hat featuring a crude sketch of Sanders, an American flag, and the text “Kids for Sanders.” A more attuned journalist would have stopped to photograph and question her. Not me. I barely broke stride walking by, pausing only long enough to roll my eyes and mutter to myself “voting age = 18.” That’ll give you some idea of the degree of detachment with which I report. What?

Carl Vickers, retired school teacher from Paris, Ontario, told me he thinks that Sanders “will make it a close call in New York.” I asked him why he and his wife, a retired counselor, had driven from Canada to see a presidential hopeful for whom they cannot vote. They told me that such events “don’t often happen in life.” I didn’t get it but found their lack of practicality charming.

That theme of the Vickers’ was echoed by the better part of Sanders’ introductory speakers: Bernie is the type of candidate you wait your whole life to get behind.

I had seen Sanders rallies on TV but was braced by the IRL enthusiasm. After a couple of false starts and some call-and-response chanting, Sanders, flanked by half a dozen Secret Service suits, walked out to Springsteen. Which was cool? He walked up the steps, looked around at the wild crowd, and, taking in the frenzy, mouthed “Jesus Christ” to himself.

It was a fun rally. People were genuinely excited and hopeful. Look at all these potential radical leftists I thought to myself. What do they want?

Interlude: now, I’m glancing over other news accounts, which are (am I catching the tone correctly here?) kinda snide in making the event out to be a collective fantasy conjured by college kids, which’ll eventually disappear into the unreality of their impossible demands. Yet, the crowd was diverse (female, male, young, old, Black, White, Asian, disabled, Indian, Muslim—I haven’t even got into sex/ual orientation but you get the idea); secondly, there’s the implication of political immaturity—of misguided enthusiasm. One gets the feeling that, had the youngs been disengaged this election season, the olds would have rapped ‘em over the knuckles with that.

Victoria and Dennis of the Allegany Indian Reservation in Steamburg were holding up a Seneca Nation of Indians flag.

“[Sanders] really likes minorities. We like the way he treats minorities,” Victoria said.  “We heard one thing from all the candidates—and it was from Bernie and it was positive.”

Bernie, in turn, addressed the government’s treatment of Native Americans later in the evening:

“We owe Native American people a debt of gratitude we can never repay,” he said, before touching on poverty and youth suicide rates among those living on reservations.

Sanders failed to engage any of these demographics, although he got just about everyone else in. My applause meter registered the highest readings for his screeds against Wall Street, advocacy for decriminalization of marijuana, call for Hillary Clinton to release the transcripts to speeches at Goldman Sachs, and support of women’s rights:

“What women are telling me is they want the whole damn dollar,” said Sanders after noting that women are paid at a ratio of $.79/$1.00 in comparison with their male counterparts. Lower for Black/Latino women.

James Tuttle, an engineer, described himself as a “huge Bernie supporter” and “totally a Democratic Socialist.” He held a sign that read “Thanks for your record of not being a bigot, racist, or misogynist.” He told me that the major issue influencing him–a worker in the manufacturing industry—was “wealth inequality and poor trade deals.” I said “If you want good deals, isn’t Trump your man?” He said “Not a chance in hell.”

Tuttle’s candidate got a big reaction when he said Trump “ain’t gonna happen… We beat him the national polls by double digits.”

A significant portion of the evening was spent on the (at the time of this writing) impending Verizon strike.

Sanders was endorsed by the CWA late last year (CWA members—not an executive committee—chose Sanders in an online vote), and stopped by the CWA’s Cheektowaga office ahead of the UB rally. During his speech, he lashed out at Verizon for its attempt to outsource jobs,

“They’re going on strike, because Verizon, reflecting what corporate America is doing all over this country, is asking [the workforce] to pay more for their healthcare and cutting other benefits. Verizon, a very profitable corporation, is outsourcing call service jobs to the Philippines. Verizon is not investing in inner cities in Buffalo, New York. And over the years Verizon has made billions of dollars in profit, but in a given year has not paid a nickel in taxes,” said Sanders.

On Monday, the Buffalo News, with the help of Verizon PR, framed the battle differently, as one in which a “modernizing” company will increase the “flexibility” of its workforce in order to “lower costs and serve customers better.” Argle bargle.

Paraphrasing Verizon, the News writes that “More than 99 percent of the affected employees–-all except for about 100 Verizon Wireless technicians in New York City—work in the traditional landline business, which contributed 29 percent of total revenues last year but less than 7 percent of operating income.”

“I don’t know where they got those numbers from,” Bob Master, the CWA’s press contact, shouted into the phone at me after I repeated that graf to him.

“99 percent of the workforce does not work copper,” he added, disputing Verizon’s estimation of its workers who maintain and install landlines.

Master added that, notwithstanding the concentration of the union’s members in FiOS, there are 2.7 million people in New York who rely on landlines:

“Even if Verizon wants to tell Wall St. that they’re not a phone company, they are!”

Master then apologized for his agitated manner and hung up.

In a press release of its own, the CWA blames Verizon management for underinvesting in FiOS:

“For years, Verizon has been cutting vital staff—it has nearly 40 percent fewer workers now than a decade ago. Verizon has failed to hire the personnel necessary to properly roll out FiOS, the high-speed broadband service that is still unavailable to many of its customers. In cities like Philadelphia and New York, Verizon has failed to meet the buildout obligations under their citywide cable franchise agreements.”

After the rally, I walked around the campus and thought about stuff. It was deep. The next day, on my way to the bank, I walked past the Verizon building on Elmwood. I squinted, trying to imagine reality in a more just configuration. How do you get there?