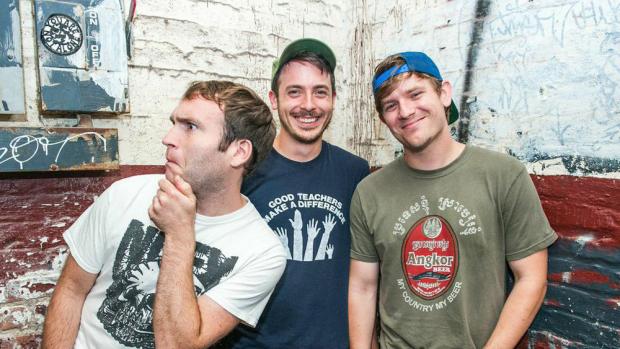 When I first started writing for the local music blog buffaBLOG not long after moving here from Pittsburgh, editor Mac McGuire gave me a rundown of the scene. He started with Del Paxton, saying something like “if anyone’s gonna get legs outside of Buffalo, these guys will.”

Prescient, Mac: Del Paxton announced they’d signed to Topshelf Records on February 4th, and it’s a hell of a home for them. The label’s at the heart of the so-called “emo revival,” typified by bands like Prawn and The World is a Beautiful Place & I Am No Longer Afraid to Die. With a split record with Montreal’s Gulfer due out April 7th and a full-length album on the horizon, Del Paxton is poised for an introduction to the world.

Or at least the niche world of contemporary emo, which is still small enough to function on old friendships, a DIY ethos, and a shared love of Braid.

Del Paxton formed in early 2013 when drummer Greg McClure and guitarist/vocalist Dylan England got together to start writing songs. Both had just recently moved to Buffalo (from Ithaca and Binghamton, respectively). Their former bands had toured together in years past and they were eager to keep playing.

After a few practices, they drafted Zack Schoedel to play bass and finished up the five songs that became the band’s debut EP, Worst. Summer. Ever., self-released on August 25, 2013.

“We recorded our EP and I remember thinking ‘I just want my friends to hear this. I have friends that I think will dig this, and that’s about it,’” said McClure.

Fortunately, one of those friends was Kyle Chapman, one of two minds behind record label Secret Audio Club. He’d known England when they were teenagers playing in bands in Binghamton and Canandaigua.

“I’ve always had the biggest man crush on Dylan’s voice and his guitar abilities, ever since we were kids,” said Chapman. “He is just one of the most phenomenal musicians I know.”

Chapman didn’t actually discover Worst. Summer. Ever. until nearly a year after it had been released. Del Paxton had been touring clubs and basements throughout the region for months before Chapman contacted England about putting the EP out as a 12-inch record.

“When [Kyle] heard Del Paxton, he just called me up and was like ‘I’m releasing this,’” said England. “He really liked it and he believed in it.”

Secret Audio Club puts their releases out on digital platforms, but their bread and butter is vinyl. Really nice vinyl: out of 500 Del Paxton records, nearly half were limited variants in runs as small as five apiece.

Though Del Paxton was Secret Audio Club’s first official signing, attention to detail like this—along with good ears—had already won them a dedicated audience of vinyl enthusiasts who snatched up Worst. Summer. Ever. when the label re-released it in April of 2014.

“We got exposed to this vinyl community, and I wasn’t really aware of how deep that rabbit hole went,” said England. “That was huge.”

Huge enough, apparently, to attract the attention of Topshelf Records, who contacted the band shortly after the vinyl was released.

“I was in the library studying for a final… and I got an email [from Topshelf],” said McClure. “I just figured it was one of my friends messing with me.”

Topshelf Records’ Seth Decoteau said that while he and co-founder Kevin Duquette were aware of Del Paxton before the Secret Audio Club release, the vinyl influenced their decision to reach out to the band.

“It’s so easy nowadays for a band to record an EP and just put it up on Bandcamp,” said Decoteau. “The fact that they were getting it released by Secret Audio Club, who we respect a lot, definitely spoke a little extra.”

Topshelf and Del Paxton formally announced the signing and the upcoming split with Gulfer on February 4th, 2015.

“If you would have asked me a year ago what label I would like to work with the most, I would have said Topshelf,” said Schoedel. “So it’s cool that it happened that way.”

Del Paxton working with Topshelf makes sense. Del Paxton traffics in catchy hooks made covert by unconventional song structures and rhythms while Topshelf is known for pushing the envelope of what modern indie, punk and emo sounds like. While you can apply the “emo revival” label to either, there’s more going on than nostalgia for mid-90’s Midwest guitar rock.

Catch Del Paxton on Record Store Day (Saturday, April 18) at Black Dots Record Store (7pm, $8) with Cages and Bryan Johnson and Family. They’ll also be touring the US and Canada in the spring and summer to support the split with Gulfer, due out April 7th, 2015.