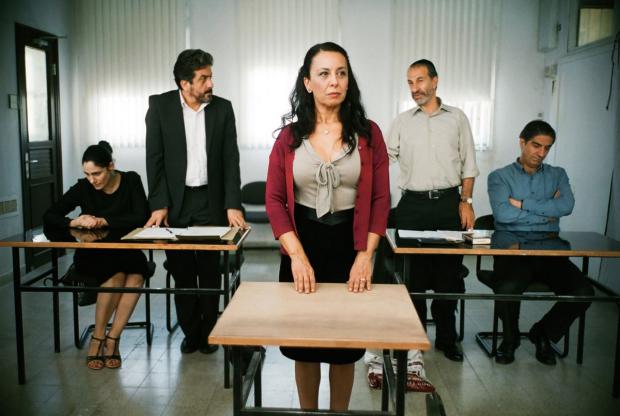 Four films to write about: Where do I start? The one I liked best? The one most of you are most likely to be interested in? All that’s clear is the one that ranks last.

Let’s start with the one that most needs the push because you’re least likely to have heard of it. I admit that I dragged my heels before watching the DVD screener of Gett: The Trial of Viviane Amsalem, about an Israeli woman’s attempts to get a divorce. But after I finally put it in and pushed play, it kept me fascinated for a running time of nearly two hours.

A little background is in order: Until very recently, civil marriage did not exist in Israel. You could marry under the auspices of your religious authority or you could apply for a “couplehood union,” which sounds like the insufficient “civil union” options generally available to same-sex couples in the United States.

By the same token, divorces in Israel can only be granted by religious authorities. Jewish marriages can be dissolved only if the husband agrees to a divorce; if not, the woman is considered a “chained woman.”

Viviane Amsalem (Ronit Elkabetz) is a woman seeking a gett, a writ of divorce from her husband Elisha (Simon Abkarian). When she first applies she has lived apart from him for three years, after 30 years of marriage. There is no question in her mind that they are incompatible and that she has no wish to live with him. She has been living with her siblings, and as the owner of a beauty parlor is self-supporting. To our eyes, there is no reason not to grant the divorce.

But the trio of rabbis to whom she must plead her case see only that her husband will not give her the gett. There is no adultery, he hasn’t beaten her: What’s the problem?

Gett takes place entirely inside the room where Viviane argues, with the help of her advocate Carmel (Menashe Noy). It is essentially a courtroom drama, though technically it is not a court: the rules are vague but unbending. And Viviane has to struggle every step of the way, even to get her husband to show up. If he doesn’t, the rabbis argue that they have no way to compel him other than to set another hearing in a few months.

As the months turn into years, the trial becomes a Kafkaesque absurdity. The film has elements of humor, especially in the testimony of some of the witnesses Viviane calls.

Gett is the final in a trilogy of films about this couple written and directed by Ronit and Shlomi Elkabetz. The others—To Take a Wife and 7 Days (Shiva)—have not been released in the United States. Hopefully that will change with the success of Gett, because it would be interesting to go back and fill in the story of this couple’s unhappy history. But it’s not necessary: cunningly directed and well acted, it’s a wholly rewarding film on its own.

While We’re Young is, I think, the best film yet from Noah Baumbach, writer-director of The Squid and the Whale, Frances Ha, Greenberg, and occasional collaborator with Wes Anderson, for whom he scripted The Life Aquatic with Steve Zissou and Fantastic Mr. Fox. If it has a fault it’s that it may be a bit overstuffed, jumping from one story to another in the third act, but I think Baumbach reconciles the two adequately.

Ben Stiller and Naomi Watts star as Josh and Cornelia, a Brooklyn couple in their 40s. Having decided not to have children, they find themselves increasingly alienated from their friends, who they feel are becoming infantilized by their babies. They become friends with a hipster couple in their 20s (Adam Driver, Amanda Seyfried). Josh, a documentary filmmaker who has been stuck on his latest project for nearly a decade, sees in them a freshness that he feels can rejuvenate him and Cornelia.

This leads to a variety of comedy not unfamiliar to Ben Stiller fans, which finds him getting into uncomfortable situations through his own stubborn foolishness. But midway the story shifts as Josh discovers that his new friend’s apparent innocence is a mask for ambition, which may just be the dark key to what he was never able to achieve himself.

As a non-breeder, I admit to being pleased to find a rare film that dares to stand up for the idea that your life is valid even without children. But being a parent shouldn’t disqualify you from enjoying While We’re Young: Baumbach’s satire is gentle and even-handed, and his wry observations on aging in the post-boomer era are spot on. (And kudos to whoever cast Charles Grodin as Josh’s father-in-law, a famous filmmaker who knows what it takes to get ahead, and veteran folkie Peter Yarrow as the aged academic whom Josh obsessively films.)

Given the propensity of many families to spend holidays at the movies, you have to wonder why the Weinstein Company chose to release Woman in Gold the week after Easter: It’s exactly the kind of feel-good historical drama that families unfettered by young children flock to, if only for its general inoffensiveness.

The film is based on the true story of Maria Altmann, who as a young woman fled Austria with her husband to escape the Nazis. Most of her family, successful Jewish industrialists, were killed and their art collection confiscated. One of those paintings, Gustav Klimt’s Portrait of Adele Bloch-Bauer, wound up in the Belvedere Palace in Vienna, where it became known as Austria’s Mona Lisa. After the Austrian government announces a policy of returning stolen artworks to their rightful owners, the now-elderly Maria (or at least as elderly as you can appear when you’re played by Helen Mirren) has decided she should have it back. And because she can’t afford an able attorney who specialize in this field, she hires young Randy Schoenberg (Ryan Reynolds), who is the grandson of composer Arnold Schoenberg.

That’s the kind of detail you couldn’t invent, and to the best of my knowledge Woman in Gold is less egregious than most recent “based on a true story” films in re-writing history. Sad to say that may be the script’s greatest problem: the real story involves a lot of legal wrangling that isn’t terribly cinematic. And director Simon Curtis (My Week with Marilyn), in his efforts to create a David vs. Goliath story in which the Austrian government is morally indistinguishable from the Nazis, steamrolls over anything potentially ambiguous in the script, including the absurd overvaluation of art and the fact that Altmann’s legal claim to the painting is fought through a legal loophole. It’s a movie made for audiences who like nice scenery, some heart-tugging moments (all unnecessarily hammered home by a syrupy score) and the chance to look at Dame Mirren, who can do this kind of thing in her sleep.

On the subject of great actors working below their pay grade: At last year’s Toronto International Film Festival, Al Pacino appeared in two first-rate films that indicated he was finally starting to pay more attention to the roles he was taking. Sadly, The Humbling (from the novel by Philip Roth, scripted by Buck Henry and directed by Barry Levinson) went to video on demand, while Manglehorn (directed by David Gordon Green) is still trying to drum up attention at lesser film festivals.

Instead, we get to see Pacino in theaters in the silly Danny Collins, a star vehicle making use of all of his flamboyance and little of his skills as an actor. He plays a highly unlikely rock star (think Neil Diamond by way of the worst of Rod Stewart) who decides to atone for his sins by seeking out the son that resulted from a long-ago affair he can barely remember. That the son (Bobby Canavale) wants nothing to do with him is no surprise, given that we’d have no movie otherwise. When not trying to work is way into the life of his son’s family, Danny holds court at the New Jersey hotel where he’s staying, trying to charm not-a-fan manager Annette Bening. And because Danny was inspired by the discovery that John Lennon wrote him a letter of encouragement in the early 1970s, it’s all scored by Lennon songs used in the most thuddingly obvious ways.

I won’t tell you that it’s not occasionally fun watching Pacino ham it up in this ridiculous role. (No such luck for Christopher Plummer, even more miscast as his manager.) But this directorial debut of Dan Fogelman is what you’d expect from the writer of scripts like Fred Claus, The Guilt Trip, and Crazy Stupid Love: schmaltz with onion powder.