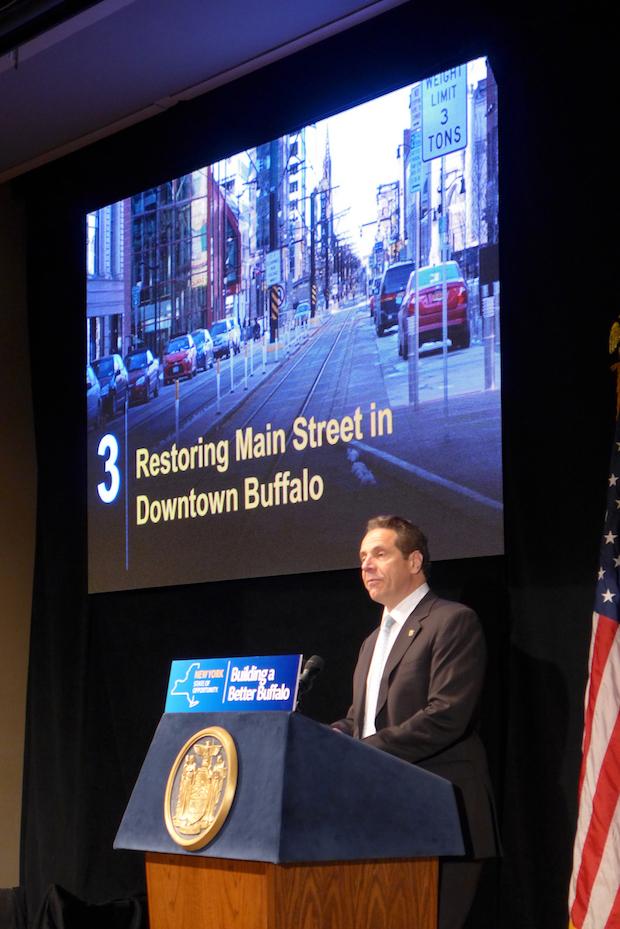 Welcoming, warm-up remarks made by Lieutenant Governor Kathy Hochul primed the capacity crowd at Buffalo Museum of Science on Wednesday, April 6. Promised beforehand, via an email inviting interested citizens to attend, was a concise theme for the program: Major Transformational Projects on the East Side and City of Buffalo.

New York State Governor Andrew Cuomo hit the stage to a standing ovation. As is custom, he mentioned the politicos present, including Niagara Falls Mayor Paul Dyster and, later, the transformational project in the works now up north: the elimination of the loathed fifty-year-old Robert Moses Parkway at a reported cost of $40 million.

That fact received cheers and applause.

Cuomo outlined similar projected plans for the City of Buffalo totaling $90 million: Kensington Expressway (“The 33” to locals), that divides the city, will be transformed into a parkway, partially; Scajaquada Expressway will be returned to its former parkway glory before its 50 m.p.h. transformation in the 1950’s that also divided the city (the Governor showed overhead photographs of the way Delaware Park and surrounding landmarks looked before and after the expressway); development (long-discussed) of Niagara Frontier Transportation Authority’s former DL&W Railroad Lackawanna Terminal; and the continuation of the opening of Main Street downtown to vehicular traffic.

The Buffalo Billion initiative was mentioned by Cuomo, and that all over the state it has garnered him “dirty looks” by politicos in other cities across the state. He said it’s like giving a Christmas gift to just one child. Both he and Hochul cited the energy and enthusiasm that is palpable locally, and that improvements to infrastructure and quality of life are on the region’s must-do list.