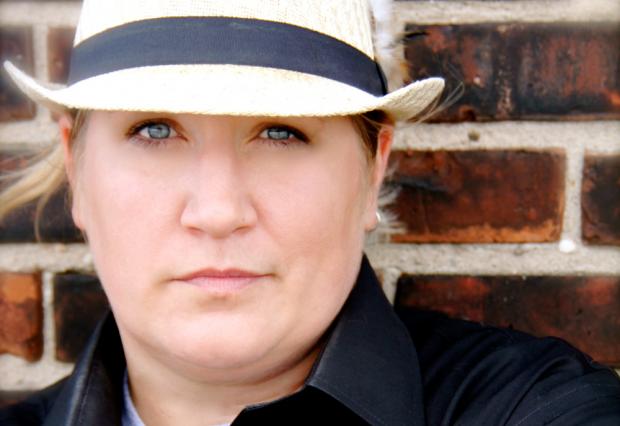 Last year, comedian Kristen Becker—Buffalo-born, Louisiana-raised, now splitting time between Buffalo, Provincetown, and New Orleans—was struck with a quirky idea for a road show. She’d seen a video of a tattooed young Christian preacher named Jay Bakker, son of TV evangelists Jim and Tammy Faye  Bakker, in which  Bakker told a stunned church audience how his understanding of the Christian message of love demanded that he (and they) accept and love LGBT people and their right to marry.

Becker, an out and proud lesbian, was moved to write to  Bakker and propose a traveling tent revival of the South: She’d tell jokes, he’d preach, there’d be some music in between, and, with any luck, the diverse crowds drawn to their shows would share some humor, love, and acceptance of one another before the night was out.

It was called Loosen the Bible Belt: A Tour for Humanity, and it was a strange, beautiful success.

And so Becker and  Bakker are doing it again this year, bigger and better. The bill for their May tour includes comedian Dwayne  Duke and ukulele player and singer SarahRose Marie. Plus they’ve added a full band, Buffalo’s own Heavenly Chillbillies, who are also providing the tour with a 50-foot, vegetable-oil-fueled tour bus that will set off from Buffalo for points south after a kickoff show on May 12 at Babeville.

To fund the tour, Becker has set up a Kickstarter. (They’re about one third of the way to their $5,000 goal.) Supporters who pledge $25 or more will be treated to a steady stream of daily video reports from the road; pledge $1,000 and the Heavenly Chillbillies will throw you a party for 10 on their exceptionally cool tour bus.

We caught up with Becker last week to talk to her about last year’s tour and the upcoming odyssey.

Talk about this year versus last year. How did it get so much bigger?

Last year we had to test the concept. Everyone I talked to about it last year said, “Huh? You’re not going to get a Christian preacher to tour with you.” And there were gay bars that were like, “No, we don’t have preachers in here.” Because they’re so used to having a negative experience with preachers. I’d have to vouch for Jay in the gay venues and he’d have to vouch for me in the more Christian-esque spots. Last year just gave us a lot of practice.

This year, number one, I had something to show people to get them on board. Not much, but we had a few cameras on us here and there. And now there’s my relationship with Heather Reed, who’s a filmmaker in P-Town. With her help, I’ve been putting out a lot of video content; she’s really added to what we’re doing. She’s really into it. This girl grew up three hours from me; I was in Shreveport and she was in East Texas, and now we’re producing partners in P-Town. So weird.

I mean the bus is an expense, but it’s a better story, right? It’s great story, I think, just to have everybody jump on. Everybody is really into the idea of promoting everyone getting along, and making it fun. Everyone is putting their best efforts in, and we split the money at the end, if there is any.

So I don’t know exactly how it got so big, but I’m pretty excited about it.

Talk about this year’s lineup.We have Dwayne Duke, who’s from Ohio; he has actually come and played Nietzsche’s. We were really white last year and I was trying to avoid that. Earl helps with that: We have this giant, older, African-American guy with dreads, and then Duane is younger, gay, much cleaner comedian than I am, so he balances me out. SarahRose Marie is from Buffalo, but living in New Orleans now, and she plays the ukulele and sings. I’m hoping we’ll get her together with the band and they’ll make some fun music for us. And then the Heavenly Chillbillies. So this is more like the tent revival I originally thought of.

Do you and Jay draw different crowds?

We both draw our crowds. And that’s the best part. The only thing that Jay and I agreed to is that we wouldn’t try to tone the other one down. I made a concerted effort this year to avoid gay bars and churches, if at all possible. The goal is to have a middle ground everyone feels comfortable going to—religious people, non-religious people, non-gay people.

The way we built it last year was I saved all my really dirty stuff for the end. I would do an opening 10 minutes or so and everyone would think I was funny and personable, and then there’s some songs, and then another comic who was real clean, and then Jay would come out. And after Jay, I would close the show with all my dirty stuff. I would say, “If you were here to see Jay, now is the time to leave, because it’s about to get really dirty gay in here.” And no one ever left, even the old religious-looking ladies. Because by that point in the show, they already get it. They get that we’re accepting everyone for who everyone is. Maybe they’re real religious and don’t especially want to hear dirty jokes, but they’ve just been preached to about how you’re supposed to accept everyone. It’s really cool: We get to practice and model acceptance for them.

I think we’re generating the opposite. We’re getting so much energy back from people. Honestly, in Amarillo there were a couple people who didn’t know what they were there for. I mean, Jay gets up there with a Bible in his hands, and if you’re sitting there in a bar and you don’t know what you’re there for, it can get awkward.

It got to where Jay would joke about it, like, “This isn’t a bait and switch…” But once he starts talking, it really is just about love, it really is just him saying “People are turning this message on you, and it’s not fair, and its not the correct interpretation, I’ve studied this…”

I’m almost playing down the gay element now. Our audience is 50/50, because there’s a lot of reasonable straight people in the South. There’s just no gathering place for them.