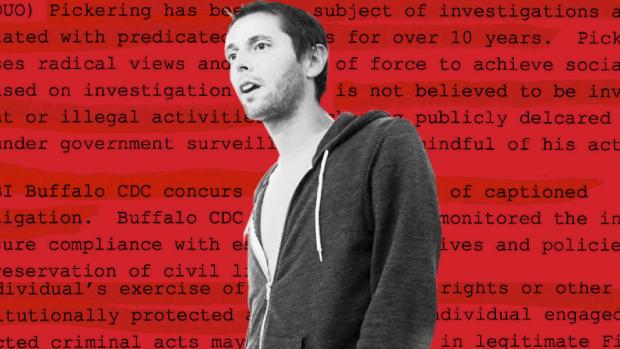 On March 18, the Buffalo News ran a fine story by reporter Phil Fairbanks, the details of which readers of the region’s alternative press (both The Public and Artvoice) have known for some time. It’s the story of how the FBI spent two years and as yet unnumbered resources tracking the activities of the owners and habitués of Burning Books, a shop on Connecticut Street on Buffalo’s West Side that specializes in radical history, talks and films about radical movements, and workshops on such treacherous subjects as Freedom of Information laws and how the average citizen can apply them.

Excerpt from FBI files documenting the two-year investigation into Burning Books and its owners.

There are several elements that the News’s article underplayed:

All this raises three questions:

On Saturday, April 9, 7-10pm, there will be a fundraiser and talk at 1526 Main Street (at the corner of Ferry), where Pickering and others will discuss the investigation and display some of the related documents they’ve retrieved from federal authorities through Freedom of Information requests. Proceeds will help pay continuing legal costs.