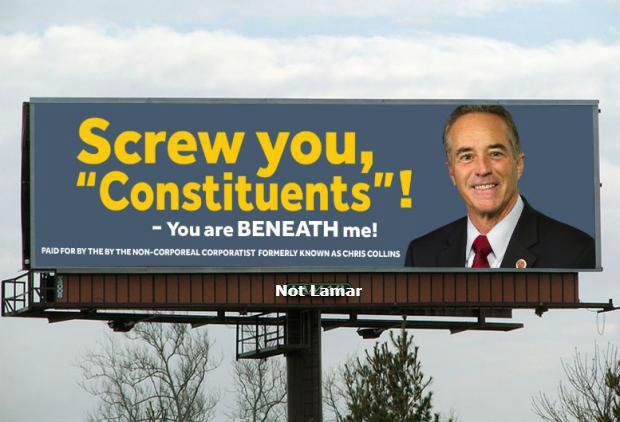 Last week, I wrote of Chris Collins’ extraordinarily hyperbolic attacks on his young constituents: There were a lot of moms, dads, and kids at those marches. You call them all “radical extremists” at your peril; the only reasons you’d use such laughably extreme hyperbole is if you’re scared, and you need to rile up a shrinking base. Collins — afraid to face constituents or the media — sent out a flak to accuse his teenaged constituents as Marxist shills, “radical partisans have co-opted the Parkland tragedy in an effort to score cheap political points.”

All of that to avoid appearing at a student-organized forum on school gun violence. He thinks these attacks will trick his core electorate into thinking that his refusal comes from a position of strength.

But like the Parkland kids, the typical right-wing smears don’t stick. Just like extreme right-wing Fox News propagandist Laura Ingraham mocked Parkland survivor David Hogg for not getting into UCLA — and lost all of her advertisers as a result — these kids don’t give up, they don’t acquiesce, and they don’t vet their responses through a bunch of Democratic consultants before taking to social media and jabbing back. Specifically,

Here’s the problem Ingraham and her ilk: they have nothing, not a god damned thing, to counter the fairly modest proposals made by the Parkland students. Normally, when these assholes have zip diddly, they simply launch into whatever low-grade, unfunny ad hominem they can dream up. But with the MSD group, ad hominems are a third rail – after all, these kids had friends and family gunned down, and one of them who spoke last Saturday still carries shrapnel from the attack in her face. So, really, the only choice that someone like Ingraham has is to argue her case without ad hominems. But, for her, that’s like baking a cake without an oven or driving a car without wheels. It simply can’t be done.

and the old rules don’t apply:

Not these kids. They have clear messages that haven’t been muddied by technocratic bullshit- “My friends got shot and there are too many fucking guns and we’re going to do something about it and we’re going to go after people who won’t.” The end result, obviously, is legislation, but these kids are not pushing specific laws- they’ll let legislators do that.

And it is working. A clear message, the moral high ground, and inclusive approach, and most importantly, not taking any shit. Someone throws bullshit at them, they turn it back around and amplify it on their target. See also, Laura Ingraham. And when they get minor victories, like the weak laws that passed in Florida, they don’t celebrate, they nod and get back to going after the motherfuckers who keep putting guns on the street.

So, when Chris Collins sends out some spokesdrone to denigrate kids in his district who may not vote yet, but whose parents do - and they’re probably Republicans — as being “radical partisans”, they’re going to clap back and it’s not going to go well for the guy pushing 70.

These students are trying to get their elected officials to come together and find solutions to a real problem, and Chris Collins has cavalierly attacked them, and they’re not going to take it. They’re not going to be defamed by Donald Trump’s most reliable TV shill.

Here is the information for the students’ gun summit. Elected officials denigrate them — and this meeting — at their peril. Maybe it’s the “accountable” language. NY-26’s Rep Brian Higgins will be there as well as Collins’ opponents.