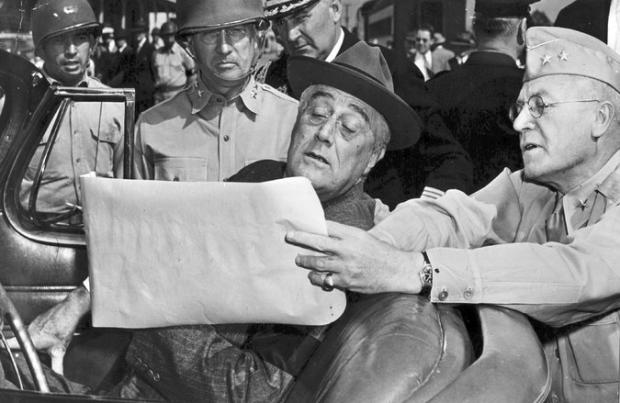 The year 2014 was an excellent year for us World War II history buffs. Four books I have found especially interesting cover overlapping aspects of that war. They are Nigel Hamilton’s The Mantle of Command: FDR at War, 1941-1942; Craig Symonds’ Neptune: The Allied Invasion of Europe and the D-Day Landings; James Hornfischer’s Neptune’s Inferno: The U.S. Navy at Guadalcanal; and Joseph E. Persico’s Roosevelt’s Centurions: FDR and the Commanders He Led to Victory in World War II.

All of these books have special meaning to me for I followed newspaper accounts of the events covered by them as a high school student until January 1944 when on my 17th birthday I enlisted in the Navy. Fortunately for me, I only got to the Mediterranean after VE Day but my brother commanded an LST at Normandy and another later in the Pacific.

While each book has much to savor, The Mantle of Command towers over the others in its contribution to our thinking about our leaders during that war. It breaks new ground in its analysis of the months before we entered World War II and the early days of that war. I am pleased to find my personal high opinion of it supported by the fact that it is the only one of those titles included among this year’s National Book Award finalists.

Hamilton’s central character is, of course, FDR—do readers today fail to recognize those famous initials as representing Franklin Delano Roosevelt?—to whom he assigns highest marks. His book provides plenty of documentation in support of that evaluation. Roosevelt was a masterful political leader who understood the task assigned him, winning the two-ocean war against Japan, Germany, and Italy. He accomplished this goal in his dealings with his contemporaries by strong-arming (for example, by imposing his powers as commander-in-chief), by gaining public support through his “fireside talks,” by applying his personal charm, and whenever necessary through manipulation.

Manipulation indeed. FDR was a master politician, a very bright and knowledgeable (he had been assistant secretary of the Navy) but essentially sly and self-contained man who knew the motivations of those with whom he had to deal and who turned those motivations to gain his own ends. Thankfully, those ends were the same as those of the Free World. I would not want to contemplate what would have happened if FDR’s and Hitler’s roles were exchanged.

Roosevelt never got to write his memoirs, having died in office on April 12, 1945, less than a month before VE Day when the Germans surrendered on May 7, and five months before VJ Day when the Japanese did so on September 2. But of course Churchill did, in his Nobel Prize-winning six volume The Second World War. Needless to say, Churchill’s story does not match that of Hamilton in important aspects.

The view Churchill conveyed to the world (including me) was that he was the essential guide of those opposing Hitler from the west through that war. While Churchill certainly played a supporting role behind those of Roosevelt and Stalin and deserves special credit for sustaining the English through his masterly speeches to the British Parliament, thankfully Roosevelt took Winston’s proposed actions with a rich dose of salt and outmaneuvered him at several key points before and after Pearl Harbor on December 7, 1941.

Perhaps the most important of these points was when the two first met in Newfoundland in August 1941. Churchill came hoping to lead FDR to declare war on Germany, an act for which Roosevelt had no chance of gaining support from either Congress or the public; Churchill left instead with Roosevelt’s Atlantic Charter that would, over time, spell the end of the British Empire.

This was a terrible pill for the British prime minister to swallow, deeply committed as he was to maintaining that overseas empire, and he would, for example, continue to oppose any compromise with Indian nationals, even when Japanese invasion of that country was threatened.

Churchill also took principal credit for the attack on the Axis in northwest Africa—what he termed “the soft underbelly” of the Axis—which would assist General Montgomery’s offensive against Hitler’s powerful General Rommel. No indeed, says Hamilton. Roosevelt had that in mind for some time because America needed a morale boost after suffering a series of losses in the Pacific. And Roosevelt had an election coming up. He tried to get that invasion (Operation Torch) scheduled just before the November 3, 1942 voting but the operation was delayed until November 8. In that election Republicans won the popular vote and gained 47 congressional seats. I am convinced that the wild enthusiasm I observed at the time of that invasion would have completely reversed that vote. But never mind the election, Roosevelt delivered us that sorely needed jolt to our morale.

In fairness to Churchill he dealt from a position of extreme weakness. His armies were poorly led; witness the loss of Singapore to outmanned Japanese, and defeats and retreats in North Africa and in the China-Burma-India Theater as well as a threatened Australia. But his judgments were often wrong. (As Persico points out, for example, Churchill would continue to oppose the invasion of mainland Europe until the ships were at sea.)

In forcing Operation Torch on his professional soldiers Roosevelt had faced down a near revolt. And many of his military leaders including Eisenhower (as well as other historians) did blame his insistence on Churchill’s influence. The US military wanted nothing but the cross-Channel invasion of Europe and they wanted to focus all resources on England. They even tried to blackmail Roosevelt by turning those resources from the European to the Pacific Theater if the president insisted on Africa. But that invasion could not take place for another year at least. In fact, it did not occur for 19 months, so you could blame that additional half year on Torch. By the time of D-Day, however, Montgomery had fortunately convinced Eisenhower and Marshall that they had severely underestimated the forces necessary to insure success. In any case Roosevelt simply brushed aside the threats Marshall conveyed to him.

And then there was General MacArthur. I spent 42 months in the service and never once heard a kind word said about him by a soldier or sailor. He was generally known as Dugout Doug for his time deep in the fortress at Corregidor while our troops were starving on the Bataan March. And he lived in luxury in Australia while his forces were mired in Guadalcanal and similar non-vacation resorts.

Hamilton takes MacArthur to task for his incompetent response to the invasion of the Philippines a week after Pearl Harbor. He told President Quezon, “I don’t think that the Philippines can defend themselves, I know they can,” and then failed utterly either to prepare for the expected attack or to defend against it. Even worse, MacArthur supported Quezon’s willingness to surrender his forces to the invaders (which Marshall and FDR rejected) and illegally accepted a $500,000 gift from Quezon shortly before reversing his decision to leave Quezon at Corregidor when the two families left by PT boat for Australia.

Here is Hamilton’s telling paragraph: “The President was even more disappointed by MacArthur’s histrionics—the only term that could describe the ‘flood of communications’ (as Eisenhower called it in his diary) the general had transmitted to Washington by wireless since Pearl Harbor. For in their miscalculations, wild exaggerations, grandiose recommendations, and doomsday warnings, MacArthur’s cables had given cause for the President to question MacArthur’s mental health.”

But FDR did not dismiss MacArthur. We needed a figurehead in the South Pacific and he would suffice. And indeed MacArthur did get his act together to contribute to the island hopping campaign to retake the southwest Pacific. It would finally be up to Truman to discharge him for “his open defiance” and “insubordination” many years later.

The Mantle of Command takes us only through 1942 and the first stages of the African campaign. He tells us that a sequel will cover FDR’s leadership through later stages of the war in Europe. I look forward to that book.