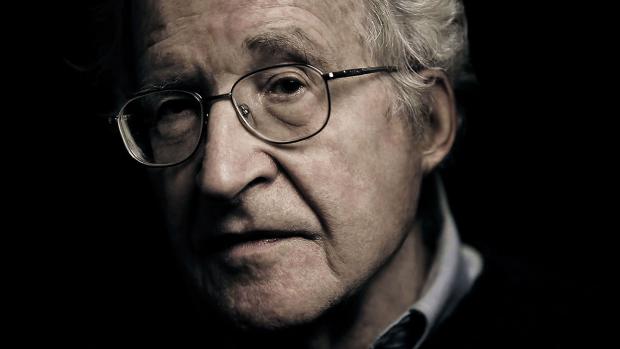 “All for ourselves, and none for other people” is what Adam Smith called the “vile maxim of the masters of mankind.” In this 2015 documentary directed by Peter D. Hutchison, Kelly Nyks, and Jared P. Scott, the erudite and unflappable Noam Chomsky delivers what amounts to an hour-long lecture on income inequality in the US, the diminishment of democracy, and the corrosive effects of both on our society.

The MIT linguist, who became a prominent spokesman for the American Left in the 1960s, begins by describing his family’s own experience of poverty during the Great Depression. The personal narrative gives way quickly, however, first to a description of today’s ever-accelerating concentration of wealth and power into the hands of fewer and fewer people, and second, to the sometimes violent history of the United States, always with an eye on the tension between rich and poor, powerful and powerless, oligarchy and democracy. If the trajectory of that history doesn’t make you angry, then odds are you’re in the wrong theater.

Chomsky himself never betrays anger; his tone is somber, even bloodless. He is ultimately an optimist—he is a progressive and so believes that the arc of history bends toward justice—but you’re forgiven if you find this film difficult to mine for hope. From the repression of organized labor to the stoking of consumer culture, from the cultivating of an uniformed electorate to the assignment of human rights to corporations, Chomsky paints a bleak picture of an increasingly ugly society—one in which basic human decency disappears, where the last vestiges of democracy are meaningless. Don’t get Chomsky started on the “hope” and “change” peddled by Barack Obama in 2008 and 2012; nor is he in particular thrall to Bernie Sanders, to whom he has allowed some heavily qualified praise, while noting that, in the unlikely case that he were elected, he would prove ineffective in changing our politics and our economic system.

The only hope he sees rests not with any individual politician or public intellectual but rather in true popular movements—not in elections but in mass uprisings, as exemplified by the Civil Rights movement and periods of labor unrest in this country, and even the Occupy movement, despite its shortcomings. Here he is indeed an optimist, as he believes that power does ultimately rest with the people. At the film’s end he paraphrases his late friend, the historian Howard Zinn: What really matters are the countless small deeds of unknown people who lay the basis for the events of human history. These are the people who have made change in the past; they are responsible for making change in the future, too.

The filmmakers interviewed Chomsky several times over four years; that his discourse flows as if it were offered in one sitting is a credit to their work. (They are aided somewhat by the fact that the 87-year-old Chomsky’s wardrobe varies little: a button-down shirt and a dark sweater.) They’ve done fine work in the interstitial moments with animation and historic film footage, photography, and audio. Whether you are depressed or inspired (or both) by Chomsky’s lecture, the filmmakers carry you to your conclusions expertly.

Requiem for the American Dream is showing this Thursday, March 31 at the Screening Room.