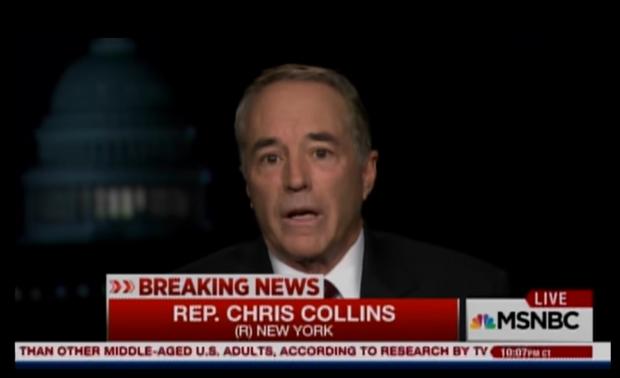 Representative Chris Collins is one of the biggest cheerleaders for Trumpcare, which will cost Americans more money for no guarantee of coverage for essential medical services, and throw 24 million people off their health insurance. Mr. Collins, a multi-millionaire, can afford whatever insurance he wants, or use the health insurance offered to him as a member of Congress. He also refuses to hold meetings or town halls with constituents who are concerned about losing their insurance, or not being able to afford it anymore.

Trumpcare is an unmitigated disaster; when the CBO score showed that it would reduce the deficit by over $300 billion over time, and throw 24 million off of their insurance, Republicans went back to the drawing board. What they came up with has been scored by the CBO as reducing the deficit by half as much as the original proposal, and throwing the same 24 million people off their policies.

Their fix was to spend $186 billion more for no gain in coverage.

But what’s also evident is that no one knows what’s in this health insurance revocation act. It was literally thrown together in a couple of weeks, done in secret, and Democrats have been completely shut out of the process — not one Democratic amendment has been considered, as opposed to Obamacare, which included around 100 Republican amendments.

Chris Collins, ever the cheerleader for Donald Trump, predicts “victory”, and asks his constituents to be patient.

“In my district right now there’s a lot of misunderstanding about what it is we’re doing,” Rep. Chris Collins (R-NY) told MSNBC’s Brian Williams. “And once we get it done, and then we can have the chance to really explain it.”

Williams had asked Collins how he would explain the bill to residents of his district who may stand to lose insurance coverage.

I wish there existed a way for a Chris Collins to come before his constituents to fix their “misunderstanding” and “really explain it”.

Sounds a lot like we have to pass the bill before we can explain to people what’s in it. Nihilism is a failing ideology.