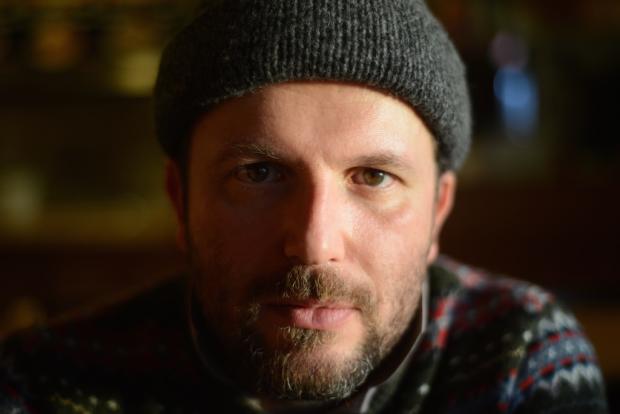 In the 1940s, Walt Disney introduced Fantasound, a quadraphonic surround-sound system developed to accompany the theatrical release of Fantasia. Disney paid for the installation of the system in a number of cinemas nationwide, an expensive folly that nearly broke his company’s back.

“No one cared that much,” says Allen Farmelo, during a recent interview on the 15th floor of the Hyatt. “Fantasia was a big success because of the visuals, but the sound was something that no one seemed to care very much about.”

In addition to Fantasound, Farmelo ticks off a number of innovations in audio recording and presentation over the last century that have failed to revolutionize the way we create and consume sound, en route to describing a revolution he believes to be imminent: the movement among makers of audio recordings toward high-resolution, three-dimensional experiences, especially as experienced through high-quality headphones.

“We’re just now rounding the corner to where these incredibly immersive three-dimensional experiences can be in your pocket—on your phone, on your listening device,” he says. “With a good pair of headphones you can listen as if you are sitting in the center of the Berlin Philharmonic.”

Farmelo is a record producer, founder of the record label Butterscotch Records, and editor of Pink Noise Magazine, a feminist publication about recording and audio. A Buffalonian by birth and at heart, Farmelo spent the past decade working in New York City and now lives in the Hudson Valley. He holds an MA in sociomusicology from the Department of American Studies at SUNY Buffalo.

On Wednesday, March 25, he leads off the Science and Art Cabaret, a joint project between Hallwalls Contemporary Art Center and the UB College of Arts & Sciences that takes place in the Ninth Ward at Babeville. (He’ll be followed by David Gutierrez of the Irving Klaws, and Elaine T. Stathapolous and Jeff Higginbotham, both of UB.) The cabaret’s theme is sound, and Farmelo’s presentation is called “From Shit-Fi to Holosonic Immersion: Listening Culture in the 21st Century.” He talked to The Public this week about the history of audio, the rapid changes it faces now, and where those changes might lead.

Tell us about your talk at Hallwalls. I’m looking at what I think is going to be a big change in the listening culture of this century. So in the last century we went from having invented recording—and harnessing electricity, a lot of real basic things—and then recording went through a number of cycles. Around 1950, it peaked in terms of studio-to-consumer fidelity. We had analog tapes that had pretty great fidelity, and you could buy replicas of those tapes and play them on your reel-to-reel machine. You got pretty much an exact copy, more or less, of what was made in the studio, or the concert hall, or wherever it was made.

And then quality started to take a nosedive as convenience came into play. We got long-playing 12-inch vinyl discs. These held up longer, and you could carry them around, and the machine was easier to manufacture and operate, but the sound wasn’t as good as the tapes. Then we went to eight-tracks and cassette tapes, which were nice and small. The sound got worse, while convenience kept going up.

Then we get to the CD. CDs were supposed to be durable; they weren’t. They were supposed to sound great, and they solved a lot of the problems of analog recording—mostly hiss and noise—but the sound quality of the CD is something that’s hotly debated.

CDs were quickly jettisoned by younger generations when we got the internet. We introduced the mp3 because everyone’s hard drives were tiny and the internet wasn’t capable of shuffling around what at the time were considered large files. And we also saw the invention of mass theft. So we went for super-convenience, where you didn’t even have to pay for it; you could get it instantly off the internet, or as fast as your modem would allow you to, and the sound was shit.

From there we’ve gone to streaming, which offers even more convenience: You don’t even have to download the files. And the sound is a little better, but during all this time people’s playback devices have become phones and laptops—not great playback devices.

So where do we go from there? So what I’m looking to talk about on Wednesday is what’s happening in this century. And it’s actually looking kind of cool and exciting. Two things are happening. First, we’re seeing the internet get fast enough to handle really great sonics. And we’re seeing high-resolution audio promote better devices to play those better files on. And we’re seeing an incredible upswing in interest in quality headphones. The headphone culture is growing so swiftly.

The way I look at it, we’re rushing toward The Matrix, toward virtual reality. People are going to, more and more, be putting devices in, on, and within their bodies in order to immerse themselves in the media we’re creating. We can talk until we’re blue in the face about the ethical and philosophical questions that surround that immersion in technology, but it is going to happen.

And there’s the question of what you subject yourself to by integrating technology with your body. I’m not really here to pass judgment on whether becoming cybernetic is good or bad, because I don’t really know. Given the way we’re messing up our planet, I’m not convinced it’s the worst way to go. And given that capitalism has run rampant with our visual and sonic culture and really created a mess—including the Labatt six-pack [grain elevators] downtown here in Buffalo—it may be the case that we would want to put on a visor that could erase those things. It might be that we would want to take the sound of traffic and sirens and machinery and everything else the industrial revolution forward has foisted on us and replace it with something else.

And that’s essentially what people do with headphones: They replace the sound of the real world with a virtual one. And now we’ve got the technology to easily recreate the experience of of being immersed in 3D sound while wearing simple headphones. It’s call binaural audio, and I’ll be discussing that at length in my talk.

How much sound am I missing by using my phone to listen to crappy mp3s? How much is really a qualitative question that I think a lot of people, including Neil Young, make the mistake of trying to answer in a quantitative way. The question should be dealt with qualitatively. It’s kind of like asking how much is someone missing by drinking Dunkin Donuts coffee instead of stopping off at the boutique coffee shop and getting a really great hand-poured brew. If you can’t tell the difference, you’re not missing anything. If you can tell the difference, and you’ve taken the time to immerse yourself in these aesthetic experience, you’ll come to know what you’re missing. Quality is phenomenological, highly subjective. People can learn to experience more deeply. I’m personally calling for a culture-wide remedial sonic education in order to bring recording back up where it belongs along with film, photography, architecture and other technical-creative fields.

I’ll say this: If you’re interested in having one of the most beautiful experiences you can have as a human listening to something that another human has made, a piece of art, then you’re missing a ton by listening to traditional stereo recordings on shitty stock earbuds and a phone. It’s not an arrangement capable of delivering a beautiful experience. We are now seeing exceptionally capable personal music players delivering amazing sound to great headphones.

How big is this movement? I’ll draw a couple analogies. Everyone said Starbucks was a stupid idea. Americans don’t care about coffee. They don’t know what a latte is. We know what happened there. We’ve seen what would be considered small-interest, boutique, small-batch, farm-to-table, handcrafted, bespoke industries grow into giant consumer bases. And look, I find it obnoxious and elitist to say, “Look there’s better quality everything, and your experience is not fully realized.” It’s not fair to say that. We don’t know what other people’s experiences are. Someone could achieve ecstasy on Dunkin Donuts coffee, I guess. But I also believe strongly that we are incredibly sensitive creatures, and if we are given a chance to develop our aesthetic senses—whether it’s tasting better wine or food or listening to better-sounding music—then what’s demonstrated on a small scale can blossom into a much larger industry.

The interesting thing with sound is that its not just music; it’s not just records. The gaming industry is way ahead of us in making immersive and three-dimensional sound. Kids are wearing headphones as they’re playing games, and they are way into the three-dimensional soundscapes, because they want it to sound like the helicopter is buzzing right behind their heads, or that there’s someone whispering in their ears.