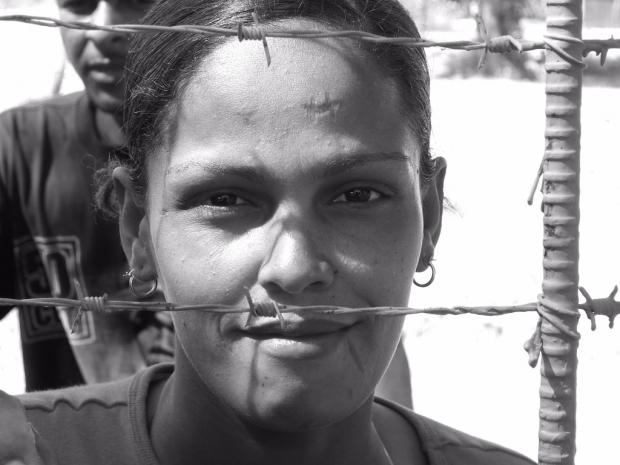 We have preconceived notions of how things are in the third world. Based on the few reports we get of countries in Africa or the Caribbean, except with regard to political upheavals, natural disasters, or religious extremism. But little or nothing of the day-to-day lives of the people in such places, whose everyday existence is often much more banal—in a good sense: peaceful, productive, ordinary—than we get to see on the television evening news. The Richard Stamps photo exhibit currently at El Museo is intended in a small way to enlighten us on this score.

Former head of the Burchfield Penney Art Center Ted Pietrzak contributes a brief disquisition on Stamps and his work and how the current exhibit came about, following a conversation between the photographer and El Museo director Craig Centrie about the photographer’s travels and experiences as a staff photographer for an exchange program to Haiti in the 1970s, and then accompanying missions of various charitable organizations to the Dominican Republic and Kenya, to document their work. The items on exhibit are gleaned from the photographer’s recent revisiting of his photo archives.

The title of the exhibit is Friends of mine forgotten…Memories lost and found. The idea is to show these people not in the dire straits and plights in which we usually get to see them, but in their quotidian lives as “a proud farmer, a baker, construction workers,” Pietrzak says. Several of the pictures are of children. “Not destitute children,” he says, “but curious and contented ones.”

Proud and prosperous-looking, he could have said of the farmer. On a stroll past a stand of maize corn taller than the man himself. The corn leaves pattern on his shirt matches the actual leaves on the tall stalks in the background.

Pride is kind of a motif. A photo called Wood Nymph shows a young girl, maybe about age 10 or 12, in a tree, looking pleased and proud about her climbing feat and the attention of the photographer.

Another photo of kids shows three of them, their faces and heads anyway, looking over some kind of building interior divider wall, facial expressions ranging from a little anxious—you don’t get a clear sense of the situation, but somehow there’s an official tone about it, like maybe the first day at school, or registration day—to confident and forthright. It’s called Anticipation.

There are two large-scale photos of scenes without people. Very different, yet somehow similar. One of a science fiction scenario of cone structures—maybe skylights—atop the Musée du Pantheon National Haitien, amid lush, tropical greenery. Another a landscape panorama, shot from foreground heights, overlooking a mid-ground valley, miles across, toward a background mountain ridge, miles away. Peaceful valley, rich land. The photo is called Great Rift Valley. Kenya. Birthplace of humankind.

“The installation is intended to ‘sell’ a particular point,” Pietrzak says in his essay, namely, “that our palate is less receptive to receiving messages of what we have in common in our differing environs, and more accustomed to digesting devastation and atrocities.”

The Richard Stamps exhibit continues through May 10.