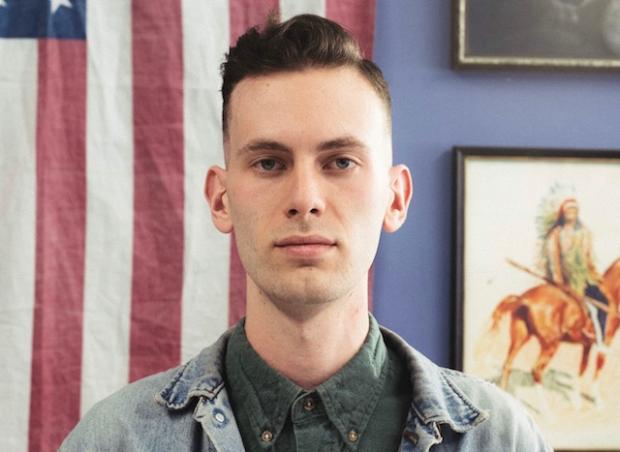 When I showed up for my interview with Benjamin Lieber, a.k.a. Marigold, I thought he was a no-show. I was already a few minutes late, and looking through the all-glass exterior of Remedy House, the small coffee shop on the West Side of Buffalo where we were set to meet, I didn’t see him. I opened the glass door of the coffee shop looking for the guy I saw on Facebook. On his page, he’s pictured sitting behind a drum kit, shirt soggy with sweat from playing drums with his band Head North, his long, wild, wavy hair hanging down in front of his face. So when I walked into the coffee shop, I almost walked right by him. Sitting at a small table directly in the center of the coffee shop, he sat, hair cut down to a couple of inches on top and shaved on the sides, stubble shaved down, wearing a blue print shirt buttoned up to the top button. A new look to go with a new solo record he’s releasing under the name Marigold, which he says is about breaking away from expectations.

“It was like closing a chapter,” he tells me about putting out the new record, and changing his physical appearance at once.

“I had very long hair for a long time. It started to become this expectation of me. Like when people thought of Ben, they thought of this dude with long hair; as superficial as that might be, I hated that there was this expectation. That feeling kind of applied to music as well. I don’t want anyone to have an assumption of what the parameters of my music are.”

His full-time band, Head North—the band that he’s been in since high school and has toured across the country with five times over; the band that has played sold-out shows and released records on indie labels like SideOneDummy—is also struggling with expectations, specifically those of fans who expect the band to stick to the emo-pop punk sound they came to popularity with but have now moved on from. More on that later.

In the course of our conversation, Lieber talks about dealing with those expectations and his own, often comparing his new record to his previous record in a highly self-critical, self-aware way—how he’s matured as a musician, and how much coffee really matters.

“I would say the sounds of this record are totally different than the last one and that was completely intentional,” he says, talking about the first record he put out as Marigold, Couterfeit Art, an angsty emo pop-punk record that Lieber released just one year ago.

“The first album was kind of, like, I had never done this before and I was, like, ‘I have all of these things I need to say and I have to prove to myself that I can do this.’ So it came out kind of pukey. Looking back at it from a more mature standpoint, it’s, like, “All right, settle down, kid.’”

After writing that record, he put down his electric guitar and picked up an acoustic guitar. He dumped his Foo Fighters records and picked up Tom Petty records. The results are what can really only be described as heartland rock; open spaces, slower tempos, and a focus on lyricism characterize the record. “Departure,” the album’s opening track, is a microcosm of the album in many ways: shuffling drums, clean guitars, and twangy vocals that occasionally push past their breaking point, painting pictures of small-town life as a beautiful trap.

“Tom [Petty] has shown me some light,” says the 21-year-old musician as he sips from a plain white mug of coffee. “The biggest thing with this record and being so inspired with him is he taught me, and is still teaching me, how to cut the fat, and that there’s beauty in simplicity. If you search a little deeper and you really feel what you’re doing, you can make a fucking G chord sound godly. You may just be playing a G chord and a C chord, but if you do it right and you think about it…it’s about quality over quantity. My biggest qualm with the first record is there’s so much going on. There’s all these riffs and fills everywhere. It’s, like, chill out.”

He speaks of his prior work as if his younger self is his biggest adversary. Of course, that’s a good thing in a musician. The best musicians strive to change, and grow, not to stick to one sound. That almost goes without saying.

His approach to Marigold in terms of storytelling was as different as his approach to musical structure. The album is written not from his perspective but from the perspective of a fictional character on to whom Lieber can project emotions, who can have revelations and epiphanies for him.

“I felt like I had this story that I had to tell that coincided with things that were going on in my life; realizations I had and figuring out where I stood in my beliefs and finding my footing in life. Like, ‘This is how I operate.’ These are the things that are necessary to put your time into and these are the things that are not worth your time in life, because you only get so much. I realized those things and figured out myself through writing about someone else realizing it, through the record.”

Lieber struggled with whether or not he should be more overt about the storyline by adding in sections of monologue, or to let his listeners piece it together. Ultimately, he chose to be more subtle with the delivery, which stuck with his philosophy of cutting the fat. Petty would be proud.

“Songwriting has always been a way for me to work out things within myself that I feel need to be worked out. When I finish a record, it’s the most satisfying feeling because it’s, like, ‘Oh my god I feel like I’ve grown so much.’ I feel so much growth within myself; I got all these things out. I kind of stare at myself from a third person almost. It just so happened that with this record, the idea of this story let me be that character and let me yell at myself.”

Writing the record coincided with a move to Buffalo for Lieber, who grew up in Williamsville, but who toured almost nonstop with Head North from the time of his graduation from high school in 2013 until 2015. As a kid, he was a Boy Scout and eventually became an Eagle Scout. He has two younger brothers and says he comes from a close-knit family with “super supportive” parents.

It was Lieber’s idea to meet today at Remedy house, the beautiful, relatively new coffee shop on the West Side, although he works as a barista at another beautiful, relatively new coffee show on the West Side, Tipico.He worked a shift earlier in the day. Coffee, he says, has become an obsession almost on par with music in recent years. It’s still up in the air whether living a highly caffeinated life helps him in his creative endeavors.

“It’s probably good and bad. Sometimes I get too wired and it drives me crazy and makes me more stressed about things. But coffee is like a world that I’ve found comes as naturally to me [as music]. I’m really good at it and I understand it when I’m working with it. It’s like a craft for me. It’s been really cool over the last two years getting into that and having another thing that I enjoy doing.” He looks forward each morning to taking his dog, a shephard-husky mix named Django who stands over six feet tall on his hind legs, for a walk each morning and then brewing a cup of coffee.

He speaks almost as highly of his roommate and bandmate Brent Martone as he does of coffee. Martone and Lieber, who not only share a band and an apartment but Django too, have been in Head North together since high school. They’ve toured the country coast to coast five times, some years playing more than 150 shows. Martone has also enjoyed working with Lieber.

“We clicked since the first time we got together,” Martone tells me over the phone. “What I think is special about working with Ben is even when it doesn’t click, he has the patience to stick with me until we get to a point where it does,” he says of their chemistry working together in Head North. As far as Lieber’s solo material goes, Martone says “it’s exactly what he should be doing.”

“He’s always been like an Americana kind of songwriter,” says Martone. “I fucking love the record.”

Their skill sets are different, Lieber says. Both are talented songwriters, but Martone has a greater interest in the engineering side of things. Together, they’ve made a name for themselves with Head North, but since writing their latest record, The Last Living Man Alive Ever in the History of the World, which marked a drastic shift in sound for the band, they’ve struggled to overcome expectations. The new record abandoned the band’s pop punk roots for a more serious, more introspective indie rock sound.

“We’ve been feeling like we’re trying to force a rectangle into a square as far as the scene we’ve been involved in for a number of years, the pop punk emo scene,” he says. “We’ve had a lot of trouble removing ourselves from it. It’s the expectations thing again. It’s unrewarding to go out on a tour where you’re playing to 500 kids a night and nobody cares. There’s a problem when you’re playing to 500 kids and you sell $60 of merch.”

He’s confident and happy with the music the band is making, but they’ve seen first-hand that the shift in tone has alienated some fans.

“We know that we’re playing good music and we know that we’re putting our all into it. So instead of being unsatisfied with that, we’re going to shift to being a band for ourselves, and we’re going to make music for ourselves, and if we get a tour that we fit on, eventually down the line, but we’re done taking those offers and trying to get a certain audience to like us that we know are not going to like us.”

They’re clearly living that philosophy. Lieber will release his new, self-titled Marigold album on April 6, and earlier this month Martone released his own solo record, One for the Road. In support of his new record, Lieber recently embarked on a solo tour. A totally solo tour, actually.

“I took our van because I don’t have a car, so I was one person in a 15-passenger van. I stayed with friends. It was the first Marigold tour ever. It was back to DIY roots, which I haven’t done since Head North was fresh out of high school. It was house shows and basement shows.”

Though he says he’s planning a move to New York City soon, he also says Buffalo is the best place to come home to.

“You go to NYC and Chicago and LA and you are one in nine million. You’re basically invisible. When you come back to Buffalo everybody knows everybody and you can’t walk down the street without seeing someone you serve coffee to every morning. It’s a really humbling thing.”