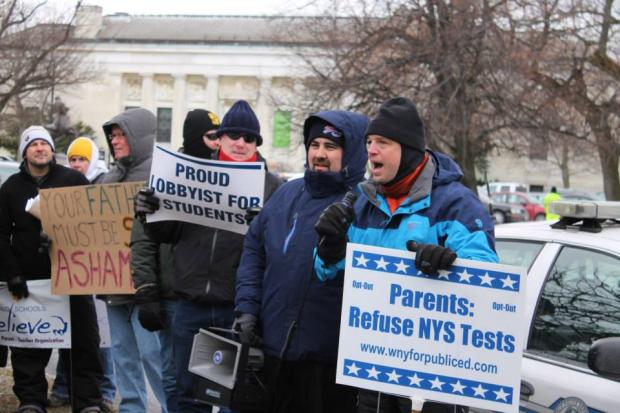 Eric Mihelbergel​ is a parent and education activist​ involved with the opt-out movement. We spoke with him because he’s been on the front lines of the movement for the past several years and has been an integral voice in helping parents make informed decisions with respect to their kids’ testing. His writing can be found here.

I heard you speak at a Buffalo Forum event in November, and you told a very compelling story about your decision to get involved in the opt-out movement. If I recall correctly you said your daughter had been given a standardized test in art. Would you mind giving a brief recounting of that?

In September of 2012, my two young daughters came home from school telling me that they were taking ‘fill-in-the-bubble’ tests in physical education, art, and music. I was dumb-founded and could not possibly comprehend what purpose this would serve my children. I thought to myself, “They should be getting red in the face during gym class, getting their hands messy in art class, and feeling the sounds and rhythms of the world in music class. Why are they taking bubble tests?” Immediately, I knew that something was not right in school this particular year. The following day, I began asking questions. I contacted my children’s teachers, the principal, the superintendent, and the school board. What I found was that a brand new series of tests were being administered to my children called Student Learning Objectives (SLO). The concept behind SLO’s requires that students be pre-tested in September and post-tested in June, and the resulting data used to evaluate the teacher. I’m a logical thinker, and it doesn’t take a genius to realize that a short bubble exam cannot possibly represent everything a teacher covers from September to June.

What do parents risk by having their children opt-out?

There is not much to risk as a parent by having your child opt-out. State law prohibits using state tests as the only means of placement for education programs. Schools must use multiple measures to determine placement in any program. Some parents fear that they will hurt the teacher or school by opting-out, but this is a completely false fear. When students opt-out of state tests they are counted as ‘not tested’ with a code of ‘999.’ They receive no score at all and it does not impact the teacher or school.

What do schools risk by having a significant percentage of their student population opt-out?

Schools risk very little by having a significant percentage of their student population opt-out. There has been a false fear that if a school has less than 95% of their students participate in state testing that the school will incur a negative impact on their funding. This is not true and it has not happened to any school in NYS. The only risk is that a school may have to complete a short self-evaluation tool if the school has less than 95% participation for 3 consecutive years, but I have personally talked to the NYS Education Department many times and they will not confirm that this will actually happen.

Sit-and-stare is the act of forcing an opt-out student to sit and do absolutely nothing for 3 consecutive hours on six separate days while other students participate in the NYS tests. This could legally be considered a mild form of child abuse in some life situations, but some school districts have still insisted on enforcing this practice. I strongly object to this practice.

Have administrators and teachers been sympathetic to the movement?

Some administrators and teachers have been very sympathetic to the movement and some have also been extremely active in the movement. Recently, we have heard some teachers publicly announce that they refuse to administer the state tests this April. Other teachers and administrators regularly speak at public meetings explaining the harmful ramifications that excessive high-stakes testing is causing in the classrooms.

Nationally, there have been reports of administrators resorting to intimidation to persuade parents to comply. As an activist here in Buffalo, have you encountered such attempts?

There are other administrators and teachers, however, that are not supportive of the movement. Last year in the Western New York area there were a few school districts that enforced the abusive sit-and-stare policy as a way to try to discourage parents from opting-out. However, it backfired on these administrators because it angered parents and even more parents opted-out.

I’ve read there were around 60,000 refusals on the math assessments last year. Have you seen area legislators taking notice and taking action?

Legislators have certainly taken notice of the large amount of refusals. Many are taking action against high-stakes testing and Common Core. Several bills have been proposed at the state level that would make positive change. One has recently been introduced by Assemblyman James Tedisco that would make it state law that every school would have to notify parents that they have the right to refuse state tests. It would also outlaw harmful practices like sit-and-stare. This is the type of action that we need.

You’ve written on your blog that you’re looking to get 250,000 opt-outs—a number you say would invalidate the data gathered by the assessments. Does that number look realistic to you?

250,000 opt-out is completely realistic. Parents are angry across the state. Governor Cuomo has publicly stated that he wants to bust the public school monopoly. We are having thousands of parents attend forums across the state right now. Opting-out has become mainstream. I certainly anticipate reaching 250,000 refusals.

Where can parents go to learn more about the movement?

To get more information, parents should go to nysape.org. Here they will find resources on how to opt-out of state tests and considerable action items they can participate in to help fight the takeover of our public schools.

It’s very important for parents and the public to realize how high-stakes testing has changed the classroom. High-stakes means that schools are closed based on state test results and teachers are fired based on state test results. The tests that are used to do this are the NYS Common Core Tests in ELA and Math. Parents want their children to learn many things in school like collaboration skills, research skills, life skills, debating, reading out loud, public speaking, sociology, three-dimensional thinking, critical thinking, self-awareness, historical literature, current literature, planning skills, philosophy, enjoyment of learning, art, morals, theater, intrapersonal skills, relationship management, ethics, self-confidence, music, history, physical education, health, spatial relations, naturalism, work ethic, self-control, freedom, playing, science, creativity, psychology, technology, business, and government. But when schools are closed and teachers are fired based only on ELA and Math tests, then the entire school system is driven to focus only on ELA and Math tests. Children are forgotten in exchange for good test scores that don’t tell us anything about our children. As parents, we don’t even get to see what questions our children got right or wrong, and neither do the teachers.