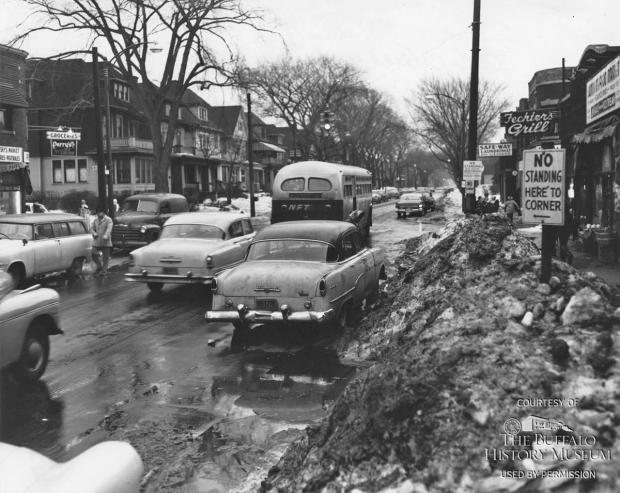 A cluster of small businesses developed at the intersection of East Ferry Street and Wohlers Avenue, the southern gateway into Hamlin Park and, after 1895, a streetcar stop for the 13-Kensington. When this photograph was taken in 1958, 14 businesses—five delicatessens and a meat shop, fish market, restaurant, print shop, confectioner, pharmacy, laundromat, barber, and beauty parlor—occupied this corner.

Urkofsky’s Market—serving Perry’s ice cream—is visible on the left. Sunbrite Food Market, Fletcher’s Grill, Hamlin Park Pharmacy, and Safe-Way Laundromat & Cleaners are visible on the right. An orderly row of American elms lines East Ferry Street, providing enclosure and spatial definition. The 13-Kensington bus, having replaced the streetcar in 1950, travels along East Ferry toward Humboldt Parkway. In spite of the berm of plowed snow on the sidewalks, the neighborhood is clearly vibrant and whole.

1958 was a year of change, however—the band that would become the Beatles had its first ever recording session, Fidel Castro’s revolutionary army began attacks on Havana, Congress created the National Aeronautics and Space Administration, and—locally in Buffalo—planning was underway for construction of the Kensington Expressway. Today, the effects of 60 years of population flight and disinvestment—results of suburban expansion at the city’s expense—are apparent.

Only one business is still in operation at the corner. Many of the buildings, and all of the elms, are no longer standing.