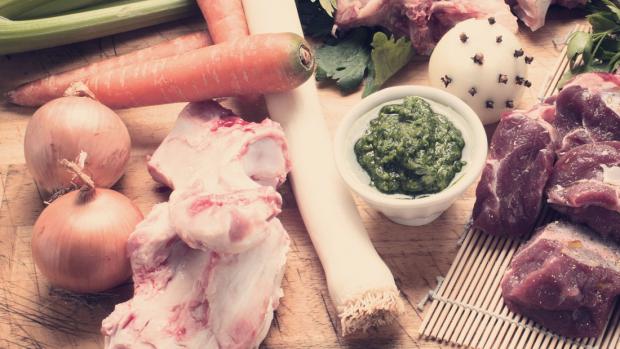 In 2008, when the New York Times first instructed me to age my chocolate chip cookie dough for 36-72 hours before baking, I complied. The results were revelatory, and my baking life has never been the same. So when the Times legitimized the bone broth trend earlier this year with a 1,600-word article exalting the beverage’s health benefits, multiethnic roots, popularity with chefy urbanites, and all-around hipness, I was intrigued. When Eater reported about a month later that the city of Chicago had officially jumped on the bone broth bandwagon, I felt fully obligated to investigate.

Popular media would have me believe that bone broth is no longer the exclusive territory of Paleo diet adherents, among whom the trend first took hold. Theirs is a meat- and vegetable-heavy way of eating that eschews dairy, legumes, processed grains, refined sugars, and coffee. It is premised on a supposed understanding of the foods Stone Age hunter-gatherers consumed on a daily basis, with little attention paid to the fact that the Paleolithic period in human evolution spanned millions of years and various locations across the globe, making it difficult to pinpoint one specific way of eating.

Believers nonetheless tout bone broth’s health benefits, insisting that as the bones break down during the cooking process, they release a unique cocktail of important nutrients, including collagen, gelatin, and glucosamine, which contribute to healthy digestion, reduced anxiety, and overall strength of health and well-being. Hoping to profit from these claims, restaurants in both New York and Chicago are selling bone broth in sippable single servings for four to nine dollars, depending on cup size and animal used.

But it turns out that bone broth is nothing more than stock—the foundational ingredient in countless recipes and something most restaurant kitchens already have on hand. The Flintstonification of its name seems to be a marketing tactic ingeniously employed by its proponents. It is an attempt to convince the masses that they are consuming a magical Stone Age elixir, as if our ancient forbearers harbored intrinsic, superior knowledge about the health and maintenance of the human body. That these same hominids had shorter lifespans than us and that they may have practiced cannibalism and infanticide are conveniently left out of the marketing campaign.

Recognizing that my skepticism of the inherent and infinite wisdom of our prehistoric ancestors might be holding me back, I decide to open my mind and give into the trend, resolving to imbibe the stuff every morning for a week. I would decide for myself if it lives up to the hype.

Without a bone both dispensary at my disposal, like the over-convenienced residents of New York and Chicago, I resigned to make the broth from scratch and consulted the Marco Canora recipe that accompanied the Times article. It took more effort to procure the various bones the recipe requires than I had initially imagined, but after a few stops, a phone call to a butcher, a 45-minute wait, and one more stop, I had what I needed. Piece of cake.

Once home, I slathered an autopsy table’s worth of beef parts with tomato paste and olive oil, which I slipped into a hot oven to brown before transferring the carnage to a stock pot with water and vinegar for a two-hour jacuzzi. After a sufficient amount of time, I added aromatics and tomatoes to the mix, and the whole thing simmered for three hours more. My house smelled like slow-cooked Sunday Bolognese. So much so that I had to actively resist adding a leftover rind of Pecorino to the mélange, recognizing cheese might be delicious, but it’s not in the Paleo spirit. If I was going to do this, I was going to do it right.

I woke up the day after my broth brewing adventure to find its overnight stint in the fridge transformed it into something akin to meat Jell-O—not exactly a welcoming sight (or smell) first thing in the morning. But a few spoonfuls of the congealed broth mixed with a couple splashes of water over a low flame quickly returned it to a drinkable state of matter. The smell improved vastly with heat, and the taste? Well, it was pretty delicious.

I continued my broth-heating and -drinking ritual every day for a week and walked away from the experience with a few sound lessons learned:

All in all, I was pleasantly surprised that I managed quite effortlessly to get through my morning jogs without my usual jolt of caffeine. Perhaps I was energized by good nutrition. Perhaps. As for bone broth’s purported health benefits, I am still skeptical—I got my first cold of the winter season on day four of my experiment.

Which is why I don’t think I will be making bone broth a lifelong habit. Cooking it from scratch was too time-consuming of a project to undertake it on a regular basis, and the payoff just wasn’t there for me. But it tasted good, and if a Buffalo eatery were selling it by the cup, I might partake from time to time. Just don’t expect me to pay five-plus dollars for it. And maybe just call it consommé.