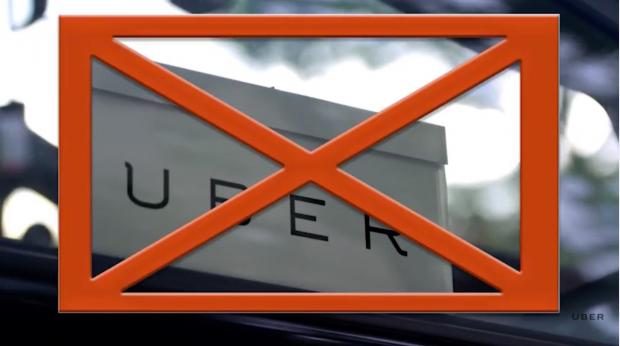 Remember when the new Lululemon in the Walden Galleria had to remove a mosaic at its threshold because people took offense at its invocation of local sports horrors such as ”wide right” and “no goal”? Uber is now doing something worse on TV screens throughout western New York—shaming Buffalo for political gain.

App-based cyber-hitchhiking corporation Uber already has the state Senate and the governor on its side. Now, it has to convince the state Assembly to advance a bill that will legalize app ride hailing upstate. Most Western New York politicians—especially Republicans—would have you believe that legalizing Uber and Lyft are the answer to something, and directed $100,000 of public money to Visit Buffalo Niagara in order to help subsidize Uber’s expansion and marketing campaign.

Uber even delivered ice cream and, more recently, Lloyd Tacos to app users as part of its marketing scheme. It’s all very cute, but it masks serious issues and questions. Uber doesn’t hire people, so if you drive for the company, you’re using your own insurance. However, your car insurance is likely voided if you drive someone for hire, so there needs to be some guarantee that there is valid coverage on an Uber car at all times.

Uber wants to offer a group umbrella policy of $1 million, but state government has balked at that. In New York City, where Uber and Lyft are allowed to operate under tight regulation from the city’s taxi and limousine commission, drivers must obtain a commercial hack policy.

The newest Assembly bill would allow local municipalities to permit and regulate ride-hailing, but that could lead to a hodgepodge of areas with different rules resembling a rural AT&T LTE coverage map. The Assembly also wants drivers to hold car policies with limits of $100,000 per person/$300,000 aggregate, plus $1.5 million while transporting a fare. (The mandatory minimum policy limits a regular passenger car must carry is $25,000/50,000).  While Uber evangelists argue that this is onerous, no one has any information on what the $1.5 million in-ride umbrella policy would cost drivers. Perhaps Uber could just subsidize that cost with the money it saves by not running ads anymore.

In short, there is a balance to be struck between the public desire upstate for ridesharing and the public good it serves; and the social cost of allowing people to hitch a ride from a stranger on an app and the risks inherent in that transaction and activity. Certainly there is a way for the Assembly and the ride hailing lobby to strike a deal, and it should be noted that taxi companies are lobbying Albany heavily to ensure that, whatever shakes out, the ride-hailing services’ competitive advantage is not disproportionately large.

Ride hailing proponents go out of their way to publicize people’s horror stories about taking cabs in Buffalo, and while Uber literally pays for political ads to expand and market in New York, without irony it denigrates the cabs as “special interests”. You’d think we were talking about some sort of critically important civil right, not a company that brings about stories with quotes like these, from CityLab:

To name a few of the most spectacular ones: In late January, a firestorm erupted over Uber’s perceived strike-breaking amidst protests against President Trump’s early immigration ban, which coined the #deleteUber hashtag (and boosted the fortunes of arch-rival Lyft). February saw a video emerge of Uber CEO Travis Kalanick’s callous treatment of an Uber driver, a gut-wrenching chronicle of widespread sexual harassment and discrimination within the company by the former engineer Susan Fowler Rigetti, and revelations of the company’s use of a potentially illegal enforcement-deceiving software.

If these weren’t enough blows against the Uber empire, there’s also the fact that the emperor might not be wearing any clothes to begin with. The company is reportedly operating on huge losses. Writes Ryan Felton on Jalopnik: “Uber is doomed because it can’t actually make money.”

Uber only makes about 78 percent of the cost of an average fare—venture capital literally makes up the difference, and Uber is burning through cash.

Now, with all that being said, I support the expansion of app-based ride-sharing in upstate and western New York, and I think that the Senate and Assembly should get together with the governor and hash out an acceptable compromise that does not effectively punish ride-hailing companies or treat them significantly differently from cabs upstate. I just don’t think that ride hailing is the civil rights issue it’s being made out to be.

Which leads us to Uber’s most recent marketing push here in Buffalo. A handful of first round NCAA March Madness college basketball games will be held here over the next few days. A big event like this is another opportunity for Uber and Visit Buffalo Niagara to dip into their pockets to pay for some propaganda. Late last year, county government approved what amounts to a gift of $100,000 of public money to be paid to the convention and visitors’ bureau in order specifically to assist in Uber’s and Lyft’s marketing and expansion efforts. Now, Uber is running TV ads in Buffalo effectively shaming us for not having ride sharing. The ad is directed not to locals, asking them to contact their Assemblymembers; it’s not directed to Albany itself—it’s directed at visitors and all but shames us for being an anachronistic backwater because we don’t have Uber.

Here is the copy:

If you’re in Buffalo for the NCAA Tournament, the biggest surprise isn’t going to be a 16 seed knocking off a 1

Or use Uber to get anywhere

Yeah, we’re kind of surprised about that, too

Buffalo is the largest city in America without ridesharing

So, while players can’t travel on the court, fans are going to find it pretty hard to travel off it

Let’s tell Albany, the ball’s in their court

Yes to Uber. No to special interests

Paid for by Uber Technologies

“If you’re in Buffalo” is about visitors—not locals. So, insult the city and harm our image to visiting basketball fans for something over which the local municipalities have no control. I guess, God forbid you walk, or use the NFTA, or use a designated driver, or *gasp* take a cab. You’d think that the world had never existed or functioned without ride-sharing apps. I’m old enough to remember not having a cell phone at all, much less carrying a mini-computer connected to the world in my pocket. Sure, it’s inconvenient that we don’t have Uber or Lyft, and Albany should figure this all out, but I don’t get the strategy of shaming Buffalo—directed at residents and visitors—to change Albany policy.

Today, Uber launched the #UberMadness campaign to mobilize residents and visitors who come to Buffalo for the NCAA Tournament. Buffalo is the largest city in America without ridesharing. The campaign urges them to tell Albany to make this the last Buffalo event without Uber. The campaign includes a TV ad, radio ad, microsite, rider email, in-app message and web ads.

“The fact that visitors and residents can’t use Uber to get to the games is pure…madness,” said Josh Mohrer, General Manager, Uber Tri-State. “Buffalo is the largest city in the country without ridesharing and, as the city increasingly becomes a center for tech, food and other events, it’s critical that Albany listen to residents and act to bring services like Uber to Upstate.”

Nowhere does the ad offer a phone number or other means of contacting Albany pols to urge them to support ride-hailing. It doesn’t single out local (or downstate) legislators who are the impediments to this expansion. Just “tell Albany”. Albany already knows.

As Uber’s own press release shows, polls already show that people favor the addition of ride-hailing upstate. So, whom are they trying to convince? We’ve already told Albany. Our Albany representatives, for the most part, all support Uber’s upstate expansion. The people who need to be convinced are downstate Assemblymembers and, most critically, Assembly Speaker Carl Heastie.

Lecturing Western New Yorkers and our visitors about what an ignorant backwater we are seems like a poorly considered strategy.