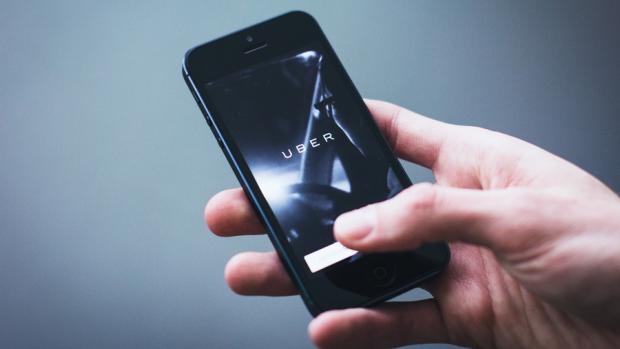 Never mind all that.

For now it’s supposed to be enough that Uber could save you a few bucks on your trip to the airport—provided that you don’t need to get there during a time which its algorithm has determined it could squeeze more from you.

Uber wants to “disrupt“ the city’s taxi industry and wants you to believe that it’ll be good for everyone: you, the drivers, and transportation in the city writ large.

If the Silicon Valley mantra of “disruption” hadn’t by now proved to be so insidious, it would hardly repay refutation. Consider the following thought experiment: You walk into a bank and hand a note to the teller. It says, “I’m disrupting this institution, please put $$ in bag.” Somewhat puzzled, the teller gets the meaning and before you know it you are exiting with a sack of money. One problem: the police. Now, before the judge, you explain your disruption theorem. He doesn’t bite. You are brought up against a rude realization: The only people allowed to wield the sword of disruption are venture capitalists and tech innovators looking to casualize a protected labor market, while externalizing the social costs. The redistribution of wealth is permitted only so long as wealth is careening upward along the vertical axis of class hierarchy. Disruption is thus a tool of the powerful against the average person, who is, let’s face it, a bit of a schmuck when it comes to the Big Picture. Wave a $10 credit in his face to distract him from a much larger future debit and he will instinctively put out his hand and mutter, “Come what may.” I put myself in this category and intend no slight; however, even the most inveterate fool is due his periodic fit of clarity.

It helps to consult an expert now and then.

Uber has perfected the transformation of the perception of workers as “assets” into “liabilities,” a transformation University at Buffalo professor Dr. Erin Hatton describes in her book The Temp Economy: From Kelly Girls to Permatemps in Postwar America (2011). The “liability model of work” she describes is one that has been, over the past 40 years, endorsed so heartily by managerial gurus, think tanks, and the press, that it seems part of the natural order:

Any dollar spent on employees—in terms of wages, benefits, training, and so on—directly subtracts from the bottom line. Labor costs should thus be kept to a minimum: Employees should be paid the lowest possible market wage; jobs should be routinized and deskilled so that workers can be easily (and cheaply) replaced; unions should be avoided; permanent employees should be replaced with more disposable contingent workers; and production should be relocated or outsourced to take advantage of lower wages and labor standards. Today, policy scholars often refer to these as ‘low road’ business practices.

Hatton traces the succession of the liability model during the second half of the 20th century and contrasts it with the “asset model of work,” which “rejects the assumption of a zero-sum relationship between workers and profits, instead proposing that the two can build on each other.” The asset model of work, she writes, is characterized by “a real investment in workers in the form of good wages and benefits, skills training and the chance to move up, opportunities for input and innovation, generous leave policies and other perks, strong labor relations, and more. Policy scholars often refer to these as ‘high road’ practices.”

“When we shift full time employees to part time with no benefits, it has broader implications,” Hatton said in an interview with The Public.

In The Temp Economy she outlines these “broader implications”: “By increasing the labor supply, the temp industry contributes to downward pressure on wages, decreased employment security, and limited mobility for all workers.”

When asked to clarify the last point, Hatton said that the taxi industry provides a point of entry into a field of steady employment for immigrants or those without specialized skills.

“When you take out chunks of the social mobility latter, it has harmful economic effects,” she told me.

Hatton’s book, in exhaustive detail, describes the forces working to etch the liability model of work into the economic order we have come to regard as natural; however, she demonstrates, the ascendency of the liability model over that of the asset model is not owed to its innate superiority but to aggressive lobbying and well-funded public relations efforts on behalf of those whose interests the former serves. Consider the optimistic statement of Robert Half, founder of the Robert Half International, one of the world’s largest staffing agencies, “We are in the midst of what might be called ‘the age of the temporary worker’.” For sure, a situation fortuitous to his bottom line but less so for those shunted into a life of labor insecurity.

Uber’s execs make Half look like a red hero of the labor movement.

Such regressions to the dark era that preceded the labor movement are possible because Uber portrays itself as merely a tech interface to which labor laws—e.g. The Fair Labor Standards Act [FLSA] and The National Labor Relations Act [NLRA]—should not apply. The FLSA entitles workers to a minimum wage, overtime compensation, unemployment compensation, and family and medical leave—all rights that Uber does not recognize on the dubious assertion that it serves as a neutral technological platform connecting clients with a flexible labor market.

Earlier this month, the Congressional Research Service demonstrated the contestability of this claim:

Shorter: An independent contractor doesn’t give up a commission to a third party, her relationship with her clients is not mediated by the interests of said third party, and she isn’t compelled to refuse work from other sources on behalf of this very same third party. Gig platforms such as Uber say that their workers are independent contractors in order to reduce liabilities, but, at the same time, do not allow their contractors the freedom required to justify the claim.

The assurance of savings through deregulation—the basis of the optimism fueling Uber’s sky-high valuations—is belied by the impending legal battles and costly re-regulation necessitated thereby.

Meanwhile, Uber drivers end up even worse off than independent contractors, who already face serial job insecurity and lack benefits as well as the guarantee of a minimum wage.

Worse, says Hatton, the triumph of Uber and other proponents of the gig economy marks a victory for “econometric thinking,” which treats the public “as consumers not workers.” The consumer gets his reduced fare Uber ride (for now), but the social cost is borne, immediately, by the driver, and, in a roundabout way, by the public and the environment. The very definition of what constitutes a job is denigrated, while the ideal of social progress (the conundrum of public transportation presents an opportunity that needs to be addressed intelligently and responsibly!) is sacrificed to the latest fad conceived by Randian programmers.

One pauses to wonder whether, once Uber has knocked out traditional cabs, it will continue to offer those highly-touted temporary savings. Why would they? If competing apps begin undercutting them, which they have already done in some cities, it will kick off a race to the bottom for wages, and, in all likelihood, lead to an increase in commission fees to the platform owners. The ride-sharing companies, insofar as they’ve already drastically reduced liabilities, have no other source from which to extract revenue. At the moment, Uber, a private company, is flush with investor cash ($62 billion and change), which will demand, after its IPO, a plump return. The exchange of venture capital for start-up innovation is predicated on re-writing the rules in favor of moneyed interests and against the working poor. It’s worth repeating the often-made observation that outside of its proprietary algorithm, Uber is a start-up with virtually no assets.

No one would say that the current medallion system is without flaws, but one should ask why it is suddenly more politically feasible to dismantle it rather than institute reforms to improve it.

The Buffalo News, unnervingly zealous to jump on whichever bandwagon happens to be passing at the moment, makes the case that Uber will cost the city more than 1,000 full-time jobs, while “creating” several hundred part-time jobs. This—by way of a counterintuitive method of calculation—is meant as a point in favor of ride-sharing. Another point in Uber’s favor, writes the News, is that Buffalo is the largest US city not to offer the service. This, torn directly from the pages of the Uber press kit, is meant to be an argument for setting loose the cork on the ride-sharing experiment. A cursory glance shows that it’s not even an argument, let alone a good one. Early adopters of Uber, like New York and Chicago, are now developing alternative apps, in order to combine the benefits of the tech with the benefits of regulation (“metered rates, no surge pricing, and professional drivers in a highly regulated environment”).

Here, one sees the advantage of not de-regulating at the drop of a Silicon Valley app: Buffalo is now poised to learn from the mistakes of early adopters and move forward with the advantage of hindsight. Meantime, slightly higher cab prices are a small price to pay.