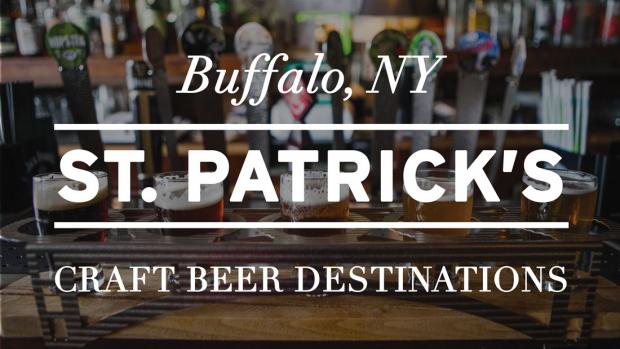 Few holidays have the power to unite beer enthusiasts like St. Patrick’s Day. From the hops-crazed hipster to the blue-collared Guinness guzzler, celebrators of St. Patty’s come in all shapes and sizes. And while everyone is Irish on St. Patrick’s Day, there’s one more common denominator powerful enough to bring everyone together on this day: beer.

Buffalo does St. Patrick’s Day right. (What other city features two separate St. Patrick’s Day parades?) The richness of Irish culture and tradition throughout the region makes this a no-brainer. Buffalo also boasts a wealth of fine craft beer bars, brewpubs and, of course, breweries. These are all part of a broader craft beer movement that is creating its culture and tradition on the fly.

What follows is a list of five great places to enjoy a craft beer this St. Patrick’s Day.

Note: This list is not intended to be a “Craziest St. Patty’s Day Parties in Buffalo” roundup. (If that’s what you’re looking for, a quick Google search should get you what you need.) And there are, of course, dozens of other destinations that are deserving of inclusion here. Rather, this list is intended to showcase the breadth of our region’s offering while providing a little something for everybody—or at least every craft beer enthusiast—whether you’re celebrating in the northtowns, southtowns, or downtown.

GENE MCCARTHY’S  73 Hamburg Street, Buffalo
Gene McCarthy’s is a sophisticated craft beer haven disguised as an ancient dive bar, creating a unique experience that is unlike any other in the area. A staple of the Old First Ward since the 1960s, Gene McCarthy’s, like the First Ward itself, has evolved to attract new generations of patrons while preserving and celebrating its roots as a rustic neighborhood pub serving South Buffalo’s working class. Combine its distinctively Irish ambiance with an impressive craft beer selection featuring the Old First Ward Brewing Company, and you have the perfect destination for enjoying craft beer on St. Patty’s.

J. P. FITZGERALD’S  4236 Clark Street, Hamburg
Featuring live Irish music throughout the weekend and Tuesday, J. P. Fitzgerald’s will be a mecca for St. Patty’s celebration. Named after a two-time marshal of Buffalo’s St. Patrick’s Day Parade, Fitzgerald is a first-generation American whose parents hailed from Dingle Bay, Ireland. The menu is eclectic but features Old World favorites like shepherd’s pie and corned beef and cabbage. Indeed, this sports bar is Irish through and through—ownership even organizes an annual trip to Ireland—but don’t be fooled. The bar offers a well-rounded selection of craft beers, several of which are brewed locally: Resurgence, Hamburg, and Southern Tier are currently on tap.

GRIFFON PUB  2470 Military Road, Niagara Falls
One of the more upscale options on this list, Griffon Pub is a Niagara Falls gastropub featuring an eclectic Americana menu and a beer list that almost boggles the mind. Griffon boasts more than 50 beers on tap and dozens more in bottles. Local, domestic, or imported; porters, pale ales, or Belgians—this place has enough beer to satisfy any taste. To celebrate the feast of St. Patrick, ask for a Smithwick’s, a Conway’s Irish by Great Lakes, or a Kilkenny Irish Cream Ale. (Please note: Reservations are recommended.)

COLE’S  1104 Elmwood Avenue, Buffalo
The Elmwood Avenue staple, having first opened its doors in 1934, is the oldest location to make this list. Because Cole’s has such a well-established reputation and identity, its status as one of the most impressive craft beer bars in Buffalo is easy to overlook. But the selection is as vibrant and expansive as the noisy-in-a-good-way vibe inside. Located just a few blocks north of the downtown parade’s terminus on Delaware Avenue and North Streets, Cole’s is a must for those looking to get their green on in and around the Elmwood Village. Famous (or maybe infamous) for its parties, Cole’s hosts an annual post-St. Patrick’s Day Parade party featuring lamb stew, soda bread, and other Irish favorites.

WEST MAIN STREET  East Aurora, NY
Few stretches of walkable streetscape anywhere in Western New York pack so much craft beer awesomeness into so compact an area as does the burgeoning scene on the west end of Main Street in East Aurora. Start at Aurora Brew Works, the beer bar/retail store combo that lets you enjoy a pint while perusing a truly impressive selection of domestic and international craft beers. Mosey next door to 189 Public House, a rustic concert venue and brewpub that rotates a different 189 brew among a nice selection of craft bottles and taps. Top your night off at the iconic Bar-Bill Tavern, where, fittingly, the wall behind the bar is adorned with a  “XX Days ‘Til St. Patrick’s Day” sign that is updated every day of the year.