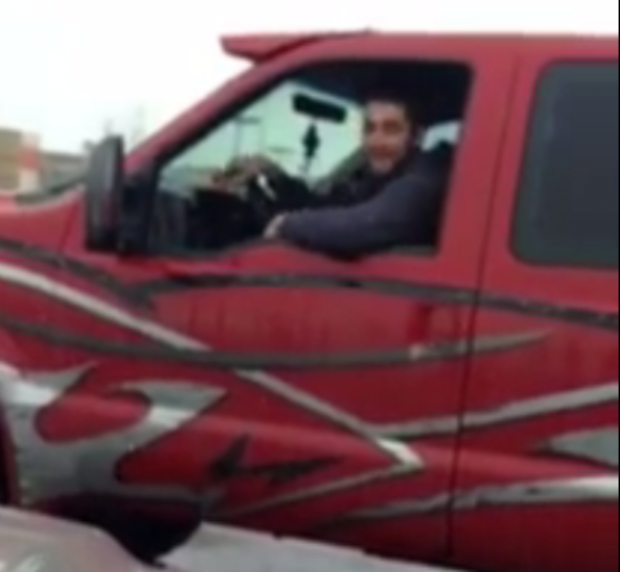 As a follow-up to yesterday’s viral story about an ugly verbal altercation in a local parking lot, I received an email late Tuesday from Marcia Lynn, the woman who shot the video of Kyle Mast verbally berating her from his pickup truck.

Here’s what she had to say in response to his explanation/apology:

In reference to Mr. Mast saying he did not “intentionally” park in a handicapped spot and he is “sensitive” to the needs of handicapped people, this is clearly false. There was no snow on the ground in Dick’s lot on Sunday.  All of the spaces have handicapped markings. My husband saw them when parking and didn’t park in those spots.  And even if he missed those clues, I did POLITELY tell him the first time he got out of his truck that it was handicapped. He chose not to move his car and said he didn’t care.  He stayed in the handicapped spot.

Mr. Mast said he was only in Dick’s for 5 minutes, yet he told you he went into Dick’s to “check out if there were any good sales.”  I’m sorry, but is he really trying to insinuate that he drove all the way to Dick’s to spend 5 minutes in there? I don’t think so. It takes longer than that to look at sale goods and he was in there longer. He pulled up right after my husband went in and my husband came out when I texted him after Mr. Mast called me nigger.  My husband was in there for a half hour. I feel he is trying to justify his parking in a handicapped space because he was “just in there for 5 minutes.” Which it wasn’t, but no matter how long he was in there, he shouldn’t have parked in that handicapped spot.

As far as going in to contact the manager or calling the police -I didn’t think to do it. I wouldn’t call 911 for a non-emergency and what is a store manager going to do?  Most retail employees fear customers’ reactions to being told such things. Additionally, aggressive customers like Mr. Mast have been known to attack people. If my husband had come out earlier, I wouldn’t have even been there when he came out. It would have ended there because I wasn’t pursuing the matter. I just thought to tell him so he didn’t take up the spot for someone who needed it, to say nothing of getting a ticket.

Mr. Mast says he is “adamant that he did not intentionally park in a handicapped spot.” He states, “it was accidental and not intentional.”  Well, if that is the case, then why didn’t he move his truck when he was informed of his indiscretion?  I’ll tell you why –he didn’t’ care.  He told you that he is sensitive to the “need for easy access for the disabled.” Yet, he didn’t move his truck.

In your interview he stated that as soon as he got out of his car, I began yelling at him, accusing him, “you can’t park there, you’re illegally parked.”  This is true. I did tell him that… But, he says he didn’t respond as he went into the store. This is untrue. We were both yelling back and forth to each other. I told him that spot was for war veterans without legs and people in wheelchairs. He swore at me. He yelled he didn’t care and told me “mind my own F***ing business.” Mr. Mast says that, as he came back out of the store, the “taunting” resumed until he got into his truck. He conveniently leaves the part out where he called me a B**** and was acting in an aggressive manner toward me the minute he came out. He was yelling and cussing at me when the only “taunting” I did was continue to tell him he was still parked illegally and he was wrong.  When he got into his truck he started revving the engine. I started videotaping because I wasn’t sure what he was going to do. I was worried he might ram my truck or something else and I wanted it on tape if he attacked me.

Mr. Mast said he noticed I was videotaping and in a “fit of rage he used a racial slur.”  If that is the case, it would be interesting to see what he does when someone is not videotaping.  He says he is sorry that he did that, and says, “it just came out,” but I feel that sort of word does not just “come out” unless you use it often.  So Mr. Mast must use that word often.  He says, “He didn’t even know or think I was black, and was just trying to come up with the most hateful word he could muster.”   Well, that’s nonsense because I’m clearly not white and I doubt he’s called other white people that name. These are all excuses to try to justify his racist actions.

You say that you feel Mr. Mast was genuinely remorseful for what he said and what had happened. And yet, he has yet to apologize to me personally.  I feel he is sorry, but not for his actions towards me, but for getting caught.

A lot of people have attacked Marcia Lynn for confronting Mr. Mast, in effect blaming the victim. That’s ridiculous. There were many different ways that this could have gone down, and each actor could have taken a different path, but Marcia Lynn’s decision to openly confront someone who, according to her, was parked improperly in a handicapped spot, was not the cause of Mr. Mast’s outrageous reaction.

Would you confront someone who was improperly taking a spot reserved for people who can’t get around easily? Perhaps not, but if you did, that doesn’t give the pig parker license to curse at you or call you a racial slur.

With respect to Mr. Mast’s explanation, on the video when she said he was parked in a handicapped spot, he didn’t say, “no I wasn’t”; he said, “so was everyone else”. That’s in the heat of the moment, as it’s happening. In my opinion, his explanation doesn’t hold water. As for Mr. Mast, he could have simply driven forward and ignored Marcia Lynn. He could have backed up, as he did, and yelled whatever epithet he wanted — short of racial slurs — and it wouldn’t have been an interesting story. Once he whipped out “nigger”, the whole thing changed.

When I spoked with Mr. Mast, I reminded him of Janelle Ambrosia, whose racist rant went viral last year. He wanted me to take the post down, and, in consultation with the editorial team at the Public, we spoke with him and decided not to. Instead, we offered to tell his side of the story and to delete references to his work and home. I told Mr. Mast that he had been recorded — with his knowledge — and that he can’t simply un-ring this bell because it had come back to haunt him. I suggested that — contrary to Ms. Ambrosia’s experience — that he had an opportunity now to explain and defend himself.

Obviously, I had to give Marcia Lynn at least the same opportunity. Nothing, after all, justifies someone calling someone a “nigger” over a yelling match in a parking lot. People need to maintain self-control if they’re going to leave the house. Honestly, I don’t understand the mentality where if you’re somehow irritated with someone, and you know they’re recording you, you rant and rave like a lunatic for everyone’s amusement.

Marcia Lynn wasn’t doing anything wrong by pointing out Mr. Mast’s improper parking. Even if, as he claims, she goaded and taunted him while he remained stoically silent, that doesn’t justify his reaction. Drive away. Change spots. Keep your window rolled up.

Don’t park in handicapped spots if you don’t have permission to do so — ever, under any circumstances. Don’t yell racial slurs at people, even if you think they’re being mean to you. That’s the lesson in social media and virality for today.