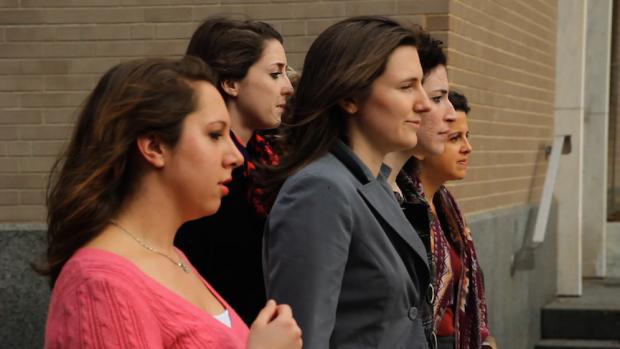 The most striking feature of Lisa F. Jackson’s new documentary It Happened Here is how the individual stories of its five protagonists simultaneously personalize and universalize the haunting specter of rape culture in America. We are drawn compellingly into the intimate world of each of these courageous young women, but never at the expense of the larger context of rape culture as a whole, which only reinforces their experiences and which is expertly framed by the testimony of administrators, faculty, and activists.

These students were among the first to go public with their stories not only of their assaults but of how they were treated by their university administrations; they were belittled, shamed, and dismissed, while their attackers went unpunished. What is shocking about the film is the resistance with which these women’s attempts to be heard were met at every turn by the very institutions they expected would protect and help them.

What is inspiring is the way these young women refused to be silenced. They evolve from victims to activists as they break the silence so key to maintaining the systemic abuses of power that perpetuate rape culture. They confront these systems of power, holding their schools accountable and sparking national awareness of this pervasive problem.

Lisa F. Jackson has been making documentaries for over 35 years; she has won two Emmy awards and a Sundance Jury Prize. Her recent films include Sex Crimes Unit and The Greatest Silence: Rape in the Congo. She will present It Happened Here in person at the Burchfield-Penney Arts Center on Thursday, March 12, at 7pm. On Friday, March 13, she will offer a workshop on Documentary and Social Justice at 10am in Ketchum Hall Room 118 on the SUNY-Buffalo State Campus.