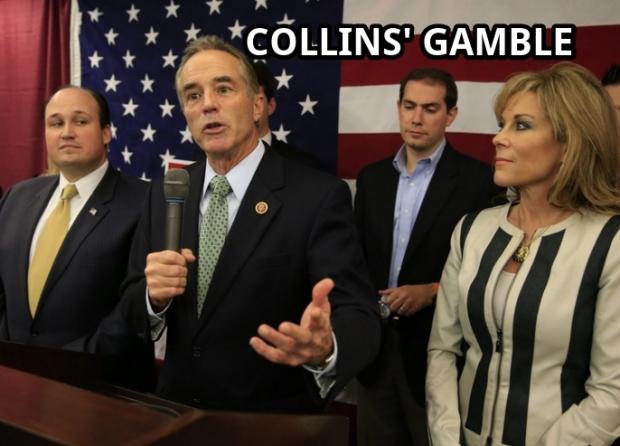 History will remember that until early 2016, Chris Collins was a largely irrelevant GOP congressional backbencher. Safely ensconced in an almost loss-proof suburban/rural Republican district, all he had to do was continue to be white, rich, and Republican in order to cruise to re-election. Having been a failed one-term county executive, he bought himself one last plaything — a seat in Congress. An American peerage.

But on a rainy Wednesday in late February 2016, Chris Collins became something more sinister and dangerous than just a casual Obama-hating millionaire seat-warmer. He joined the Trump bandwagon.

Until a few days ago, First Class Chris Collins had supported Jeb Bush, who found himself utterly unwanted by the Republican primary electorate in Iowa, New Hampshire, South Carolina, and Nevada; Trump had swept all but one. Given that the Erie County Republicans had recently chosen Trump in their straw poll, and with our Palinist bizarro-intelligentsia, led by Carl Paladino, firmly in Trump’s barnyard, Collins decided to go with the hometown favorite. After all, Trump came to Depew to raise money for the ECGOP quite recently.

Collins, however, was out on his own on this one. The relatively shoestring Trump campaign isn’t equipped, really, to deal with a bunch of elected officials’ endorsements. The Republican establishment is likely to coalesce behind Marco Rubio, who has emerged to take Jeb’s place as the safe alternative. But some people who value loyalty don’t like that Rubio ran when it was Jeb’s year; Jeb was Rubio’s mentor.  Chris Collins, for all his faults, is a guy who values loyalty.

Collins’ move as the first GOP congressman to openly back Trump took some balls. He hasn’t been a memorable or effective congressman — he’s just a solid vote for whatever the Speaker wants. There was an almost Frank Underwoodian tactical brilliance behind this move to make Collins’ 2016 more exciting. By making this announcement, Collins has suddenly, single-handedly, forced the hand of every Republican in the House and Senate to pick a side.

Collins took a leap of faith here — he might crash on the cliffs below, or sail gracefully into the best move he ever made. Time will tell, as we move towards an almost MMA-style brawl between two of the most ruthless campaign apparati in contemporary American politics. This will be a showdown so epic that both sides had better prepare for an inevitable recount process.  It’ll be 2000 all over again, and Roger Stone’s Brooks Brothers rioters will be suited up for Trump.

CLARENCE, N.Y. – Calling for an “end to business as usual” in Washington, Congressman Chris Collins (NY-27) today announced that he is endorsing Donald Trump to become America’s next President.

As if anyone really cared whom Collins would be “endorsing”, or whether Trump needed or wanted this “endorsement”.

The end of “business as usual” in Washington is code for two things:

1. that Chris Collins is up for re-election in 2016, and he wants to ingratiate himself with the suburban and rural upstate Republican voters who will almost certainly overwhelmingly back Trump in the coming election; and The reactionary, nativist, populist, authoritarian right is ascendant, after all. Collins knows which way the wind is blowing, and he wants to make sure his voters — and the Trump campaign - know he’s with them on this.

“Donald Trump has clearly demonstrated that he has both the guts and the fortitude to return our nation’s jobs stolen by China, take on our enemies like ISIS, Iran, North Korea and Russia, and most importantly, reestablish the opportunity for our children and grandchildren to attain the American Dream,” said Congressman Chris Collins.  “That is why I am proud to endorse him as the next President of the United States.”

Trump has made this demonstration by, e.g., firing Omarosa on S01E09 of the Apprentice, manufacturing the tchotchkes and schmattes bearing his name in China, and cowering at the intimidating might of Fox’s Megyn Kelly.

The line about the American Dream is typical Collins. If you navigate to his official Congressional page, his idiotic “vision” statement is still up there, that ”the United States of America will reclaim its past glory as the Land of Opportunity, restoring the promise of the American Dream for our children and grandchildren.” Imagine the gall of this apparently self-made millionaire suggesting that the American Dream is a thing of the past — he lives it. I live it. The entire region is awash in new economic activity through our startup culture and the Buffalo Niagara Medical Campus. We are still the land of opportunity, and the American Dream remains a real, present thing. To suggest otherwise is ignorant, insulting rubbish.

“The results of Barack Obama’s failed presidency have been devastating.  America is no longer seen as the world’s leader.  Our jobs are gone.  Our middle class is struggling.  And, the federal government has grown too large and wastes too much of our hard earned money,” added Collins.  “The last thing we need is a third Obama term which we would get with either Hillary Clinton or Bernie Sanders.”

Private sector jobs are up and government jobs are down. Government has grown large bipartisanly — under Republicans who fight trillion-dollar wars of choice, as well as under Democrats who dramatically reduced the ranks of the uninsured. Neither Bernie Sanders nor Hillary Clinton would be a “third Obama term”, but that doesn’t matter. Collins’ people and the Trump campaign believe it to be so, and faith trumps evidence or knowledge. This is Collins’ cover letter for that job in the Herbert Hoover Building. Don’t think Trump and his team haven’t taken especial notice of this.

“We need a president willing to make the tough decisions necessary to restore our country to greatness.  I believe Donald Trump is the man for the job, and I am proud to provide him with my support.”

Both Trump and Collins share a strong private sector background.  Before entering public service, Congressman Collins was in the private sector for over 35 years where he built a successful career as a businessman and entrepreneur.

Both as an Erie Country Executive (New York) and a Member of Congress, Collins has advocated running government like a business. “If we want to get our nation’s economy growing again and deal with the daunting fiscal issues threatening America’s future, it’s time to say no to professional politicians and yes to someone who has created jobs and grown a business,” added Collins.

“America has the potential to once again become the land of opportunity.  Donald Trump understands the importance of American exceptionalism, and has the unique qualifications to make America great again,” concluded Collins.

Cover letter. Dear Mr. Trump, I’m just like you. I also think Obama is yucky, and I know you’ll make America more friendly for us one-percenters. Enclosed please find my very pro-business CV, and I look forward to a Six-Sigma-efficient confirmation hearing. Yours, etc., Chris Collins.

The question then becomes, if (God forbid) Trump wins in November, who will run in the special election for NY-27?