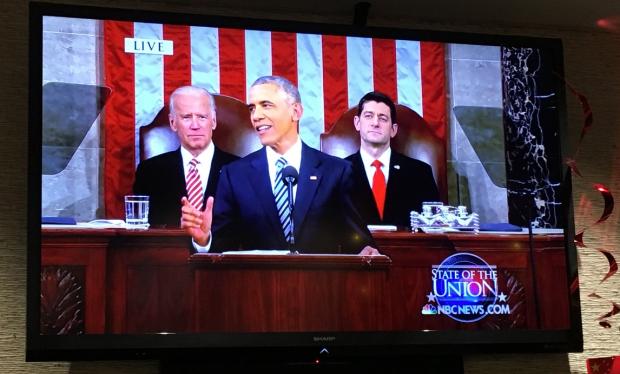 President Obama’s final State of the Union address Tuesday really captured the zeitgeist. The media have been so consumed in Trumpgasm and measuring the Republican horserace while ignoring the battle for the Democrats’ soul, that a simple reminder was needed; and Obama delivered.

The victory lap was muted. There was no grand legislative goal on which President Obama asked Congress to act. This was, to a certain degree, legacy building, but it was also a stinging rebuke of the pathetic, xenophobic fearmongering that has infected our politics thanks to the virus of Trumpism.

Remember “hope” and “change”? Obama sought to rekindle those flames. Hope — you don’t have to fear the future. The President reminded us that there’s no past glory for which we need to be nostaglic; on the contrary, every time we’ve undergone change in our society, we have overcome the fear that goes with it. We let our thoughts and actions mature, so that we as Americans made that change work for us. Our diversity, our optimism, our spirit of innovation, and the rule of law help to see us through tough times, and transformation. They are what we need to ensure our security and prosperity.

The President assailed Trumpism’s inherent cowardice by reminding us that it’s far better to face the future with confidence, rather than fear.

The speech focused on four questions:

1. How do we ensure that everyone gets a fair shot and opportunity in this new and changing economy?

2. How do we reignite our spirit of innovation, so that this economy works for us?

3. How can we best keep our people safe, and lead the world without becoming a global policeman?

4. How can we make our politics reflect what’s best in us as Americans?

As to question one, Obama took his somewhat muted victory lap, touting his record of job creation and saving the American auto industry after the great recession. He proposed that benefits and retirement savings should be simplified and portable, and that “wage insurance” might be offered so that people can pay their bills if they lose their jobs or go back for training or school. We should, he said, make sure that the system works for average people and small businesses, and not just for megacorporations.

On innovation, Obama alluded to climate change, noting that we were stunned in the late 50s when the Soviets beat us to space. We didn’t “deny that Sputnik was up there”, but in 12 years we developed our own space program and put a man on the moon. The President then called for a “cancer moonshot”, asking Vice President Biden to head it up, adding, “let’s make America the country that cures cancer”.

On the issue of security, the President explained that his priorities were keeping the US safe, and going after terrorist networks. No matter how many innocent civilians Daesh or al Qaeda slaughter, none of these terrorist groups poses an existential threat to the US, so we should stop elevating them to that level through our rhetoric. Sort of like how we shouldn’t call the Occupy Malheur crowd “terrorists”. Daesh are killers and fanatics — nothing more, and the President again asked Congress to authorize military force against it.

Appealing to our better selves: this was Obama essentially campaigning against Trump and Trumpism. The President called on Americans to reject any politics that targets people on the basis of race or religion. Diversity, openness, and mutual respect make us strong as a nation — not discrimination and name-calling. When people like Trump insult Muslims, they’re not “telling it like it is”; they are instead diminishing us in the eyes of the world and betraying who we are as a country. It weakens America maliciously to act in such a way.

Hatred and division won’t fix anything, and they’re un-American.

The most extreme voices get all the attention, and when you pair that with a sense that the system is rigged against regular people, in favor of the rich and powerful, you stand on a dangerous precipice. The President called for an end to gerrymandering; so that politicians can’t “choose their own votes”. We need to reduce the influence of money in politics. We need to make it easier for people to vote — not harder.

America is great already. We don’t need to be nostalgic for the good old days either because they weren’t that good, or they weren’t good for everyone. The President concluded,

They’re out there, those voices. They don’t get a lot of attention, nor do they seek it, but they are busy doing the work this country needs doing.

I see them everywhere I travel in this incredible country of ours. I see you. I know you’re there. You’re the reason why I have such incredible confidence in our future. Because I see your quiet, sturdy citizenship all the time.

I see it in the worker on the assembly line who clocked extra shifts to keep his company open, and the boss who pays him higher wages to keep him on board.

I see it in the Dreamer who stays up late to finish her science project, and the teacher who comes in early because he knows she might someday cure a disease.

I see it in the American who served his time, and dreams of starting over — and the business owner who gives him that second chance. The protester determined to prove that justice matters, and the young cop walking the beat, treating everybody with respect, doing the brave, quiet work of keeping us safe.

I see it in the soldier who gives almost everything to save his brothers, the nurse who tends to him ’til he can run a marathon, and the community that lines up to cheer him on.

It’s the son who finds the courage to come out as who he is, and the father whose love for that son overrides everything he’s been taught.

I see it in the elderly woman who will wait in line to cast her vote as long as she has to; the new citizen who casts his for the first time; the volunteers at the polls who believe every vote should count, because each of them in different ways know how much that precious right is worth.

That’s the America I know. That’s the country we love. Clear-eyed. Big-hearted. Optimistic that unarmed truth and unconditional love will have the final word. That’s what makes me so hopeful about our future.

We have challenges. Change is scary, and if you pair it with economic inequity, it makes people angry. But America is great because, among other things, we can sit here and debate all of this. America isn’t any one thing: America is the sum of our daily acts of citizenship.