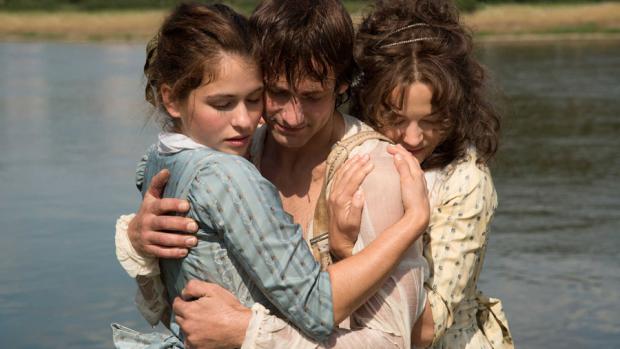 That the Academy Awards are the greatest promotional device Hollywood has ever devised is unarguable. No reason to limit it to actual winners or even nominees: in the traditionally struggling field of foreign-language imports, the fact that a film was nominated to be a nominee is enough to perk up the interest of distributors. Countries are invited to select the film they want to have considered for the category of Best Foreign Language Film; from these submissions the Academy selects five nominees. But even the ones that don’t make the final five are free to go into the marketplace trumpeting that they were their nation’s “Official Entry” for the Oscars.

This week brings two of them to local theaters. One is the kind of lush historical drama that is often accused of being made to win Oscars. (The King’s Speech is the best recent example.) The other is a sly, unsettling drama about the human condition that gets under your skin.

From Germany, Beloved Sisters is what you might call speculative history, spinning out a question that has intrigued students of the great 18th-century writer Friedrich Schiller: Was his sister-in-law, who wrote two biographies of him after his early death, also his lover?

We first meet two sisters, Caroline and Charlotte von Lengefeld (Hannah Herzsprung, Henriette Confurius). They are aristocrats in Weimar Germany, but just barely: Their father is low-ranking nobleman who dies without leaving much to support them or their mother. Younger Charlotte is sent to find a rich husband at court but can’t stomach the suffocating rituals and the prospect of a loveless marriage to a buffoon in a grey wig. So Caroline enters just such a marriage, to a man her mother refers to as an “evil elephant,” sacrificing her hopes for happiness for the sake of mom and sis.

When the sisters meet Schiller (Florian Stetter), a young writer of growing renown with no financial opportunities, it’s love at first sight all round. Caroline is the most passionate but least able to act given her marriage. She persuades Charlotte and Schiller to marry as a step in keeping the three of them together. Do they live happily ever after? Of course not—who makes three-hour movies out of stories like that?

Despite its length, Beloved Sisters sometimes feels rushed; writer-director Dominik Graf primarily works in television, where filmmakers these days are used to larger canvases to tell stories. It is very much a movie about words and people who revel in them, with every other scene seemingly including some writing a letter and/or someone reading one aloud.

(One drawback of subtitled films is that they don’t always pick up on subtlties of the language being translated, a problem that is compounded by characters like this: when Caroline exclaims during a passionate sex scene, ““It’s all very enjoyable,” you’re unsure whether the writer is commenting on her character or the translator simply has no ear for what Germans say in the heat of the moment.)

Beloved Sisters walks the line between Masterpiece Theater recreation and bodice-rippers like The Other Boleyn Girl. It’s a respectable, luxurious production that moves quickly for its length, but never quite brings to life a time in history of enormous social and political upheavals that may seem distant to many viewers. It opens Friday at the North Park Theatre.

From Sweden, Force Majeure is billed as a comedy, but don’t expect it to have you rolling in the aisles: it’s not that kind of comedy. (That it shares a name with the latest Eddie Izzard show is ironic.) At a ski resort in the Alps, a Swedish family is enjoying the yearly vacation, at least until a moment of imagined danger causes Dad to act in less than heroic fashion. From that point, a subtle but distinct pall sets over the family and their friends, all the worse for their inability to talk about what’s bothering them. It’s a satire in the best straight-faced manner of Luis Bunuel’s European tenure—think of his The Discreet Charm of the Bourgeoise and you’ll be on the right track. That it failed to make Oscar’s final five was one of the biggest surprises of this year’s nominations. It will be at the Screening Room starting on Friday for a week.