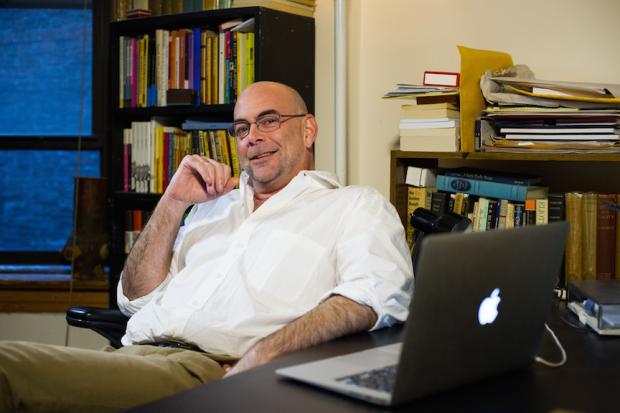 The Emerald Light in the Air
By Donald Antrim
Farrar, Straus and Giroux

All seven of the stories published in The Emerald Light in the Air have been featured in the New Yorker “over the last fifteen years,” the dust jacket tells me. Let any particularly assiduous readers of that publication be warned: The ground covered here may appear trodden at times.

Donald Antrim’s subjects are ordinary people with vexed emotional lives. Inner feeling is not a medium through which they process experience, but an obstacle to it. Sometimes it’s painful to watch them negotiate such self-imposed hindrances, and at other times it’s humorous.

In “An Actor Prepares,” Reginald Barry—or Reg as he prefers to be addressed—the Dean of Student Life and Wm. T. Barry Professor of Speech and Drama at Barry College, has a straightforward assignment: direct a student production of Midsummer Night’s Dream for the small liberal arts college at which he teaches. The simple task is complicated by a series of factors: half-interested student actors, Reg’s alcoholic girlfriend/costume designer, the lingering haze of pot smoke, but most of all by Reg himself, who, despite having left behind middle age, has cast himself as Lysander in a move to get at Hermia, played by Mary Victoria Frost, “only a sophomore herself and…a sure candidate for Yale, or Juilliard if she can ease off the drugs.”

Instead of increasing its appeal, Reg’s attempt to update the play ends in chaos. The interpretive baggage taxing the original Shakespearean frame (Bottom and his Mechanicals, for instance, are done over as “a team of Elizabethan power lifters”) brings it to its breaking point. Reg mocks the sticklers at the performance—thumbing their “paperback copies” of the play during a particularly unfaithful moment involving a blind boy as Puck in a mini pond under attack by a wounded duck—but his disdain is only a cover for his own shame. His rendition was, after all, an elaborate excuse to paw a co-ed, and in that sense alone did he succeed. Antrim doesn’t hang around after the performance for the inevitable round of recrimination, which lets the story end on a funny note. Maybe you wouldn’t think it was funny. In retrospect, I’m not even sure how to classify my response.

“Laughter is not in itself liberating,” the philosopher Slavoj Žižek remarked somewhere, “but deeply ambiguous.”

Patrick Rouse, the lead in “Pond, with Mud,” is another of Antrim’s saps. He carries a journal which includes his jottings for the long poem that lends its name to the title. He fancies himself an Imagist but is hamstrung by an overcomplicated pen.

His objective is to take his fiancée’s son to the zoo. He must do so soon, because the zoo—regrettably built on the site of an immolated chemical solvent extraction plant—is about to close for good.

“Why was it that the rare and endangered species, the ones you’d never heard of, all seemed to have compromised immune systems?” Patrick asks himself.

The toxic zoo turns out to be the least of Patrick’s problems, and, while Antrim never paints us the picture of him and the boy contemplating a wheezing Black Rhino, he does manage to whip together an equally discomfiting scene.

The consumption of alcohol, drugs, and prescription meds plays a prominent role throughout the collection. Antrim likes to funnel a few drinks into his characters in order to grease up the plot. It doesn’t always turn out badly—overconsumption rarely does—but it does often bring the characters into confrontation with some previously only half-acknowledged fact. Usually, the fact has to do with a male-female relationship—its tenuous present, past undoing, or future plausibility. In the presence of such prickly issues, Antrim’s characters prefer the edge taken off. Ironically, the booziness draws them further into their dilemmas, closer to a confrontation, but not quite up against it. A worse writer would zoom in, but Antrim pulls back, permitting the characters an undisclosed aspect. Part of them remains turned away. There are, mercifully, no moments of transcendent bliss, or redundant laps around the abyss.

“Another Manhattan,” the story in which Antrim best shows off his aptitude for molding manic behavior into slapstick, centers on a nerve-racking visit to the florist. Jim wants to buy his wife Kate flowers. They need to talk. But they already have plans for dinner with Susan, with whom Jim is sleeping, and her husband Elliot, with whom Kate is sleeping. What they don’t need, Jim reflects, is “another night of exciting conversational pauses and sly four-way flirting.” Despite the knotted circumstances, Jim flits loose:

“If he walked through the door carrying a bouquet, there was a chance Kate might smile.”

In a book full of dashed hopes and downgraded expectations, this may be the most foolhardy.

Not that Antrim’s pairs are always actively unfaithful, sometimes just passively so, like Christopher and Jennifer, who, in “Solace,” are brought together by material conditions. They save money on rent by house-sitting apartments in New York City. Christopher has a tendency to get too drunk—he’s careful to keep it secret—while Jennifer has a tendency to go into the residents’ closets and try on clothes—she’s eager to show off the new looks. These are two desperate people, elbowing their way through a nomadic life, snapping up pleasure or relief when possible. But how did they get here?

Antrim gives us something like a hint. During a dinner party at which the two future lovers meet, they are subject the indecorous behavior of the host, who, after dropping his napkin, brushes against Jennifer’s breast while retrieving it.

“In a mock-formal voice, addressing the breast, the husband growled, ‘Pardon,’ then sat upright and laughed, forcing Jennifer to grimace out at the table as she shared the joke.”

Here, Antrim turns to the reader—who is likely working through a grimace of his own—with a question:

“But what was the joke?”