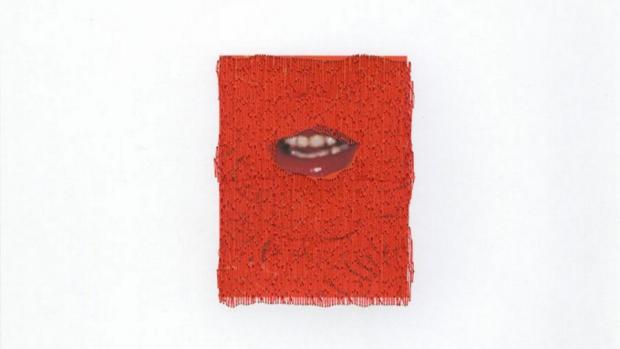 Some commentary in a little catalog on the Feminist Responsibility Project from an earlier exhibit at another gallery seems germane here. The commentator tells us—helpfully—that “in pornographic parlance, women are just holes.”

The mouth picture—that’s the title of the piece, Mouth—is strangely reminiscent of another and iconic mouth image, the famous Rolling Stones mouth—lips and teeth and enormous tongue—caricature personal reference to Mick Jagger. A kind of male counterpart image—the emphasis on part—to the Semmes image. And a sex image—like the Semmes mouth—though not overtly. A little obscene even, though not that you could prove in court. (Obscene is something you can’t say precisely or definitively what it is or isn’t, but you know it when you see it.) So not sex image per se, in se, but unmistakably as a sign, a sex semantic, as a part for the whole. Pun intended.

Where the Feminist Responsibility Project starts to get really complicated is regarding the censorship aspect of the obliterations. A basically—historically—puritanical and prurience function. Born of those two somehow interrelated impulses. A little like—perhaps—the impulse to pornography in the first place.

Also on view are a sampling of the kind of work Semmes has been doing from the beginning of her career in the early 1990s, some crudely made ceramic pots—but lovingly made, it would seem, or else why bother—and a gargantuan woman’s dress, what the well-dressed Amazon might be wearing this season. The dress is tacked to a wall, starting near the ceiling, and flows onto the floor where the fabric changes from taffeta to some reams of garish-colored velvet arrayed in concentric rings around a blue ceramic vessel of unusual sort. Possibly unique sort.

Several other vessels are in basic white, a little like classic pots or ewers intentionally crudely made, all lumpy and slumpy and where a handle—ear type—would be useful and traditional—or maybe even two, one on each side of the vessel—on these vessels a veritable cluster of handles. More handles than one could suppose any reason for. As if the potter had a handles fetish.

The Semmes exhibit continues through March 11.