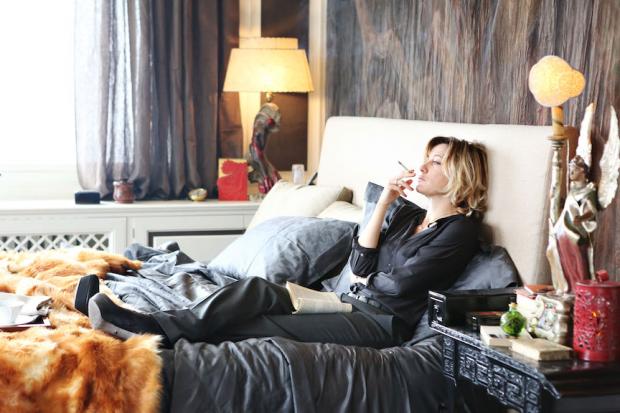 You probably first heard the term in discussions of settlements made to the families of those killed in the September 11 attacks. “Human capital” refers to the assessment made by insurance companies of the value of a life when they have to make financial restitution for one that has been lost. The family of a victim who had high earning expectations would receive more than the family of, say, a janitor. It’s a controversial subject because it attempts to quantify something unquantifiable.

Italy’s submission for this year’s Best Foreign Language Film Academy Award (it didn’t make the final five), Human Capital is based on an American novel of that title by Stephen Amidon. Reset from Connecticut to a wealthy suburb of Milan, it otherwise has little difficulty adapting a universal story of economic inequality.

The film opens with an accident on a nighttime road. A restaurant worker, biking home after a long shift catering a ritzy affair, is run off the road and critically injured by an SUV. Who is responsible? The story unfolds in three threads that begin six months earlier.

Dino (Fabrizio Bentivoglio) is a real-estate broker with a failing business and a pregnant wife (Valeria Golino, repatriated to her native country after a Hollywood career in films like Rain Man). His teenage daughter is dating the son of a successful hedge fund manager, and when he wheedles an invitation to join the latest offering, he foolishly puts his family’s future on the line.

Carla (Valeria Bruni Tedeschi) is the trophy wife of the billionaire. She tries to lend meaning to her empty life by heading a campaign to renovate a local theater, unaware that her husband’s fund is on the verge of collapsing. Serena (Matilde Gioli), Dino’s daughter, has her own secrets, one of which is the key to the tragedy that opens the film.

Glossy and engrossing, Human Capital unfolds like a variation on one of those films that spend two hours showing how a handful of seemingly unrelated characters are connected. After each segment covering the same six months, we go back to see the period from the viewpoint of another character, until all is clear. Like too many of those films, the structure is more compelling than the revealed story. Its portrait of income inequality is unlikely to shock anyone who hasn’t been in a coma since Y2K. But if the drama is undernourished, it provides material for two excellent performances from veteran Tedeschi and newcomer Gioli.

Like the just-departed Cake, you can’t help but feel that Still Alice exists largely to get an Oscar nomination for its star, in this case Julianne Moore. She may even win: Forgive me for sounding cynical if I note that her performance as a woman who learns she has early onset Alzheimer’s disease is traditionally the kind the Academy loves to reward. She’s excellent, which is no surprise. (I was going to say that she’s always good, but that was before I saw Seventh Son, newly released after a year on the shelf where it should have been left to rot.)

If only the film itself were worthy of Moore’s work. It was based on a novel by Lisa Genova, a neuroscientist whose other books feature characters with Huntington’s Disease and autism. Moore’s character, Alice Howland, is a prominent academic with an equally successful husband (Alec Baldwin) and three adult children on the way to promising careers. (Well, except that black sheep daughter who wants to be an actress.) There’s an unspoken notion that this instance of the disease is especially tragic because it stuck so fine a person, as if all the “ordinary” people also stricken wouldn’t be nearly as interesting. (They’d certainly have a lot more trouble financially.)

Directors Richard Glatzer and Wash Westmoreland are lightweights who want to touch audiences without really disturbing them, and their film has little of the lasting effect of either the Glen Campbell documentary that played here last week or Michael Haneke’s wrenching Amour.