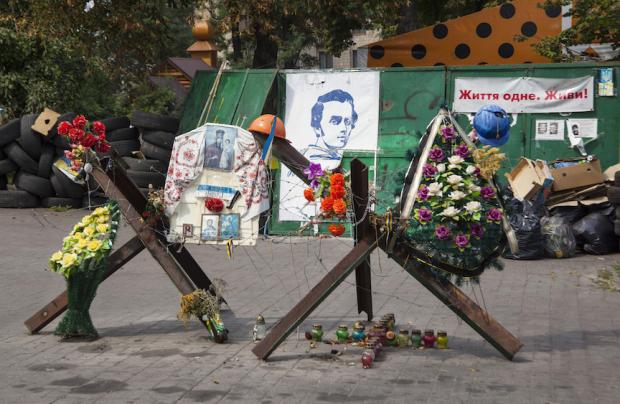 Lukia Costello’s exhibit at CEPA is about how things change but remain the same in beleaguered Ukraine, where she traveled recently to visit relatives and observe and photograph in the wake of the Russian gobble up of the Crimean region of that country. It’s one of three exhibits currently at CEPA, including one on nature in peril from various forces by Patti Ambrogi, and one of overlay manipulated photos—part portrait, part nature scene—by Valerie Kasinski.

The Ukraine exhibit is called As I Wake, I Cry. Some of the photos show life going on apparently much like always. Others show ineffectual outrage by ordinary Ukrainians at the Russian power play. Hand-lettered protest posters—some in Ukrainian, some in English, or reasonable facsimile—versus a guns and tanks military invasion by the second most powerful world regime. A middle-aged man in a “Ukraine” baseball cap and several posters, one of which reads: “Agenda of Russia has never changed!! Under Czar, USSR, or Putler’s ‘Democracy,’ they always wanted more!!!” (Putler’s apparently for Putin’s.)

Other shots are of street vendors selling milk, eggs, vegetables. High-rise housing projects looking a little scruffy and unkempt, but not uninhabitable or uninhabited by any means. A pair of workmen waiting for a bus or trolley. A busy street scene dominated by a Gucci poster for some item of accoutrement—maybe a chic pair of sunglasses—that it doesn’t look like any of the people in the scene would be purchasing any time soon. One of a peasant woman hiking down an otherwise empty rural road, lugging a pail of something, a timeless scenario.

But others of urban street scene impromptu memorials likely to individuals or groups killed resisting the Russian takeover, featuring flowers, candles, religious images. And public protests. Amid which, a youngish woman with a sign announcing, “I am Ukrainian and I cannot keep calm!” A middle-aged woman with a red purse and sign that reads, “Support Ukraine!”

One particularly eloquent photo in a public park—people in the background on park benches, talking, enjoying the sunny day—of a brown marble drum base for a statue of Lenin—the name “Lenin” inscribed on the drum—but the statue removed, just some support bolts protruding from the top of the drum, which bears in addition the tattered and defaced remnants of a pasted-on image of the prototype propagandist of the now-defunct but apparently not fully dismantled Communist system.

Ambrogi’s exhibit is entitled The Rebel Forest. It comprises two series of large-format, lush, and very beautiful photos of islands of pristine nature of different sorts and differently threatened. A woods tract in Victor, New York, that is landlocked in being surrounded by subdivisions and other private interests, the proprietors of which we get the sense would like to take over the tract for extension of their backyards or whatever other uses, except that it is currently under control of The Nature Conservancy. But land that is inaccessible to the general public, an unresolved issue.

The threat in the other case is from nature itself. The scene is Cathcart Island in the Georgian Bay, Canada. Rugged, rocky, primeval-looking. The photos document the struggle for survival of the island’s vegetation—trees, bushes, grass—through a long summer drought in 2012, and aftermath. Some larger trees died and were felled by the no doubt fierce winds that must sweep through the region, and scrubbier vegetation turned brown and sere. But the ecosystem on the whole survived and seems to have thrived on the harsh weather episode effectual culling and cleansing. Reedy grasses seem to have fully recolonized the breaks and interstices between shoreline terrain boulders still deeply grooved and striated by glaciers that would have passed over the region some twenty thousand years ago.

Kasinski’s exhibit is called Together We Are. In her artist’s statement she refers to the work as “staged and fabricated visualizations” that engage in “a dream-like and often Arcadian narrative.” Portraits with superimposed environmental images looking a little like extravagant body tattoos.

The humans in the photos are fellow photographers she has met in her travels, and the environmental scenes relate to where on the North American continent she met them. Several from California, several from British Columbia, several from New York State, including Letchworth State Park.

The Patti Ambrogi and Valerie Kaskinski shows continue until February 28 at CEPA. The Lukia Costello show until March 28.