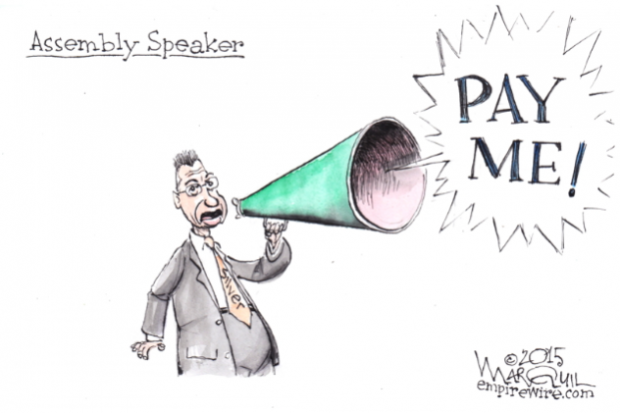 Sheldon Silver lost his speakership because he’s been indicted on corruption and bribery charges. So far, it’s been a banner year for antidemocratic and corrupt practices to be shown the light of day.

The common denominator is bad government, and why we elect horrible people.

1. ICYMI, the Buffalo School Board has abandoned all pretense of being responsible public servants.

2. Brooklyn Democrat, serial sexual harasser, and former Assemblyman Vito Lopez is settling lawsuits alleging that he was a creepy sex fiend misogynist groper. Well, that is to say that the state is settling these allegations to the tune of $545,000.  It’s taxpayer money — Lopez is only personally on the hook for about $35,000 of it. This isn’t just Lopez’s disgrace, but sheds light on how corrupt and shameful Sheldon Silver’s Assembly had become.

3. Former State Senator George Maziarz is accused of directing his staff to destroy campaign finance information soon after federal investigators began sniffing around. It might be ok to follow standard record-destruction timelines, but not so much if you’re simultaneously destroying evidence. 4. Former State Senate President, Democrat Malcolm Smith, was convicted of bribery charges last week.

Federal prosecutors had charged that Smith, with the help of $200,000, tried to bribe his way onto the GOP ballot by spreading money around to GOP power brokers. Smith was arrested in 2013, but continued to serve as a rank-and-file state senator, though his fellow Democrats did not allow him to conference with them.

He was ousted by voters in Queens last fall in a Democratic primary election. Also charged in the case was former Queens Republican boss Vincent Tabone. Smith, as a Democrat, needed to secure backing from GOP leaders in order to qualify for a place on the 2013 mayoral ballot on the GOP line. Tabone was convicted along with Smith Thursday. A former New York City councilman, Daniel J. Halloran III, had already pleaded guilty in the case.

Did you catch that? Smith was convicted of trying to bribe Republicans in Queens to give him a Wilson Pakula to run for Mayor on the Republican line. Electoral fusion is legalized corruption, and I have to imagine that this sort of quid pro quo is not at all unique to Mr. Smith.

5. Here’s another depressing story from the Albany Project. This one is about Cuomo mega-donor Leonard Litwin, a New York real estate tycoon. Litwin donated $1 million to Cuomo’s re-election campaign and $500,000 to the state Democratic committee, underscoring the toothless pointlessness of our campaign finance rules. Litwin also happened to be client of the small law firm Goldberg & Iryami, which is linked with the Sheldon Silver corruption prosecution and specializes in Article 7 real estate tax challenge suits. Litwin used the LLC loophole to get all that money (including $200,000 to Silver), to recipients.

Litwin recently booked a $260 million sweetheart loan through the NYS Housing Finance Agency to finance a luxury apartment project in Manhattan. The NYSHFA was run by a Cuomo appointee who was recently promoted, and is now Cuomo’s chief of staff.

Back when John McCain was a serious person, he’d talk of campaign finance reform to abolish what he called the “iron triangle” of special interests, money, and legislation. In New York, no one with any real authority has seriously taken up that cause, except for a federal prosecutor in Manhattan. In New York State politics, that triangle isn’t made of iron, it’s made from graphene, which is stronger and more expensive.

Furthermore, if anyone is to take up the cause of cleaning up state politics, they’ll have to lead by example and not cop out and be just as corrupt as everyone else.

I think we deserve better than this. Don’t you?