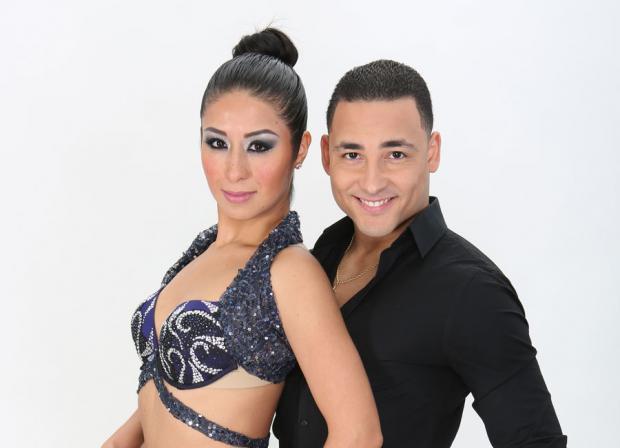 One night in 2008 at La Luna nightclub on Chippewa Street the sounds of merengue reverberated throughout the space as the band played song after song, inspiring couples to step out on the dance floor.

Fanny Olaya had often come to this bar because she loved to listen to the music. Calvin Rice, one of the band members, had just left his place on the stage to take a break when his eyes caught sight of Fanny.

“No thanks,” Fanny said.

Calvin was persistent and asked a few more times that night. It paid off, and the two ended up dancing—they’ve been dancing together ever since.

La Luna, the bar where they met is now closed, but Fanny Olaya and Calvin Rice have kept salsa alive with Baila Salsa Dance Company, which they founded together in 2010.

Olaya, who is from Peru, grew up listening to Latin music. At 11-years-old she was exposed to salsa dancing and became eager to learn the moves.

“We loved music in my house,” Olaya said. “My dad is a collector, so I was always exposed to good music. My friends started dancing and I was like ‘I don’t know how to dance that,’ so I started learning the basic steps.”

In 2004 Olaya moved to Orlando, Florida with her sister, although it didn’t take long before she relocated due to some nasty weather.

“Unfortunately when I was living there, there was a bad hurricane and I was very scared,’” said Olaya. “That’s why I moved here because I have some relatives and they called me and said, ‘Buffalo is beautiful and you’re going to love it.’”

Rice, who is a native of Buffalo and has a bachelor’s degree in music performance and education from Ithaca College, has played in salsa and merengue bands over the years. As far as dancing goes, he has always done it for fun.

“I was out every weekend playing at La Luna,” Rice said. “You got to watch everybody dancing and I found it exciting and fun. That’s kind of what inspired me to start learning seriously how to do it. I didn’t want to be on the dance floor looking silly.”

Soon after they met, Olaya and Rice began taking salsa classes together and after awhile attended annual salsa congresses where they began educating themselves about the dance style. A salsa congress is usually a four-day event where dancers take workshops from 9 a.m. to 5 p.m. each day, followed by watching performances from the professionals, and ending with social dancing at night where they can meet the instructors.

“We’ve been fortunate to meet some of the people we look up to from around the world and take lessons with them,” Rice said.

Once they became confident in their dancing, Olaya and Rice began teaching their own classes. At first they didn’t have a name, but once their reputation grew, they decided on the name, Baila Salsa, meaning “dance salsa.”

“My sister and Calvin kind of helped me a little bit because I wanted to figure out a name that meant something in Spanish and related to the music, and my sister was like ‘No, that’s too hard. Nobody will understand.’ So I was like ‘OK something more like get-to-the-point.’ What we love the most is salsa. We dance other Latin dances too, but salsa is our main thing.”

Every Sunday Olaya and Rice teach Salsa Level I (12pm), Salsa Level II (1pm) and Bachata All Levels (2pm) at the Latin American Institute located at 141 Elmwood Avenue. They also offer private lessons, and coming soon is a Ladies Styling class, which starts in mid-February and is taught by only Fanny. The ages in their classes range from 11 to 82.

In addition to their classes, they host a weekly event, “Noche de Salsa,” where they teach class at the Pucho Olivencia Center located at 261 Swan St. on Wednesdays at 7pm followed by social dancing. Admission for this event is $5 and there’s a stocked open bar. They have also organized an event, “Dancer’s Night Out–La Noche del Bailador,” which is a salsa night on Fridays from 10:30pm to 4am at Epic restaurant located at 431 Elmwood Ave. No cover is required.

Natasha Perkins, 31, heard about Baila Salsa about five years ago and has taken several classes they offer.

“A friend of mine and I would always go out and we would see Fanny and Calvin dancing together and it’s just completely mesmerizing,” Perkins said. “Every guy wanted to be him and every girl wanted to be her. I got so curious, I was like ‘OK. Where are they taking classes? Who are they? And I want to look like that.”

Perkins, who has a Cuban background, grew up listening to a lot of salsa music, occasionally dancing at home and attending different parties she knew were playing Latin music. However, it wasn’t until taking salsa classes at Baila Salsa that she started feeling a true sense of community from dancing.

“It’s therapeutic and relaxing,” Perkins said. “It’s like that ice-cold beer after a long day. It feels good to be with like-minded people who want to dance and they play some of the best music, so that always helps.”

Olaya and Rice, who are planning to get married this year, enjoy teaching dance classes together in the area and seeing their students progress from week to week.

“I really enjoy when people come to me after a few weeks and say to me, ‘My life has changed. This brings happiness,’” Olaya said, “and you can tell from their behavior, when they come they’re shy, they don’t want to dance with anybody and they’re in the corner. A few weeks later they’re friends with everybody, they come every week, they socialize. Dancing makes my life very happy and changed my life, so if I can see that little bit in somebody else, I’m like ‘I feel good now.’ When I hear that it makes me very happy.”