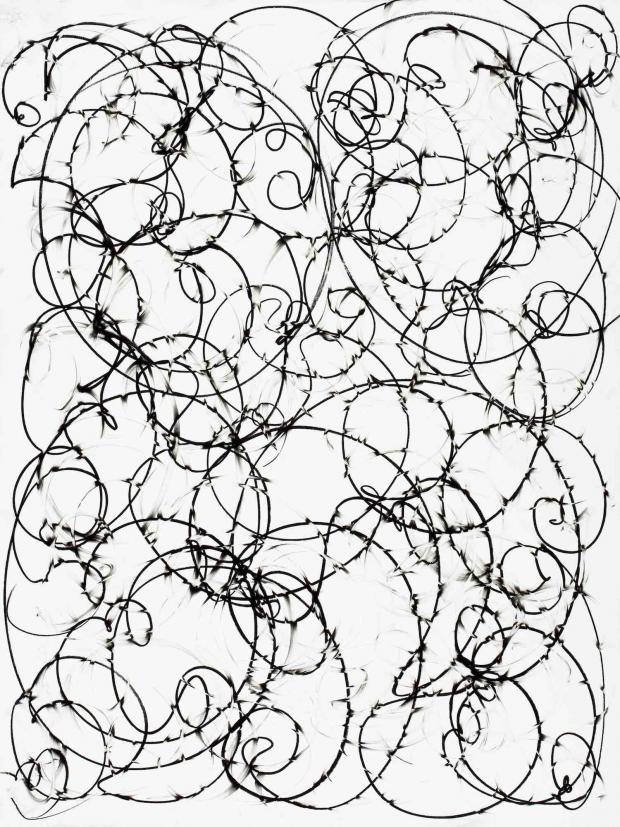 Currently on display at the C.G Jung Center at 408 Franklin Street in Buffalo are 24 photographic representations of Lory Pollina’s Omega Point Project. The original project was conceived by Pollina, a Buffalo native, while he was living in Santa Fe as a body of work consisting of 99 drawings. The series is his depiction of Pierre Teillard de Chardin’s concept of the Noosphere and the Omega Point. Noosphere translates from Greek as “mind sphere,” or “sphere of human thought.” The Omega Point is the belief that the universe is evolving toward a higher level of material complexity and consciousness. Pollina explains how the project began:

“I was awarded a grant to draw large-scale works at the Santa Fe Art Institute in New Mexico. At this time I was just discovering the concept of the collective telepathic or human energy-based global brain called the Noosphere. As my drawings were no longer restricted in size I began to see the fields of line and erasure resolve their rhythmic structures into pockets or orb shapes of three dimensional depth and imagery. I realized I was drawing what I was discovering: the evolution of conscious thought.”

The manifestation of spheres in his drawings is recurrent. Yet it is not the spheres themselves, but the process through which they emerge that map the artist’s exploration of this philosophy. Pollina’s drawings are acutely rhythmic. Inspired by the music of Johann Sebastian Bach and the paintings of Paul Cezanne, Pollina (who also plays cello), uses pure graphite in broad fluid gestures to trace his intention. The idea of involution, which de Chardin describes as the complexity of all matter on earth turning in on itself in constant revolving motion through time, is evident. The images feel like an involution. They are bubble-like windows that are recovered from positive space. The initial sense of darkness that predominates the drawings will, after closer contemplation, seem a result of the dense layering of the graphite. In contrast, the spiraling motion is repeated with aggressive erasure that softens the edges and uncovers more layers.

“My artistic process of layering circles and their reverse with graphite and repeating these movements by cutting through the graphite with an eraser, like face setting a diamond, is how I extract the Images. While being extremely dark, graphite has an iridescent quality that reflects the spectrum of color.”

To somewhat explain the confluence between Bach, Cezanne, and de Chardin, Pollina says “By creating a maelstrom of tonal complexities in rhythmic response to music, I extract through mimicking the in-folding process referred to in de Chardin’s description of evolution: Concentrated scenarios of time, depth, and space in motion.” The mind spheres that evolve out of this chaos of carbon become Lory’s representation of the self-organizing in nature that he finds so predominant in the paintings of Cezanne.

“I realized Cezanne’s late landscapes displayed the all-encompassing characteristics of ‘matter,’ or ‘nature,’ as a self-organizing system. This fundamental shift in paradigms from my linear understanding of matter and evolution would lead me down a new road. I wanted to emulate what Cezanne had achieved and do so without having to meticulously copy nature as he did to get it. I wanted to create it directly.”

Pollina will host a free, informal artist’s talk at the Jung Center on February 5th at 7pm to discuss the origins and inspirations for his Omega Point Project.The discussion will describe how the intricacies of the polyrhythmic compositions of Bach help generate the flow of his drawings, and beyond. There will be a second lecture on February 23, at 7pm, for $10.